Jamie plays it down, but she actually reads a lot of comics.  She does buy her own stuff from time to time, but mostly she reads my comics when the mood strikes her.  This weekend she picked up my copy of Wonder Woman off the coffee table, breezed through it and then started talking to me about it.

In talking about the book, I thought she made some good points, so I asked her to put some of that down in a post.

Jamie hasn't been overly curious about the rest of New 52 launch, and as far as I know, this is the only one of the books I brought home that she's read.  But she's a woman of mystery, so for all I know, she's read everything off the coffee table while I'm at the gym.


As Jamie is actually pretty familiar with the last decade or so of Wonder Woman comics (I don't think she realizes those trades are pretty much everything going back to 2000 or so), but isn't particularly invested in DC or their publishing efforts, I thought it would be useful to hear what she had to say.  She also (I think) likes Wonder Woman on her own, and I would think a young, well-read, bright woman such as herself might be someone DC would want to buy their comics.

Ryan asked me to post a short review of the new Wonder Woman (#1 in the "New 52" relaunch).  I am not a regular reader of WW, aside from a few trades and a few issues here and there that Ryan has tossed my direction.  Nevertheless, I still felt a bit sheepish when halfway through the first issue of this reboot I looked up at Ryan and confessed, "I have no idea what's going on".


I have never been particularly good with reviews, which is why I tended to avoid them on my own retired blog, but let me just quickly tick off a couple of issues I had with this...issue. 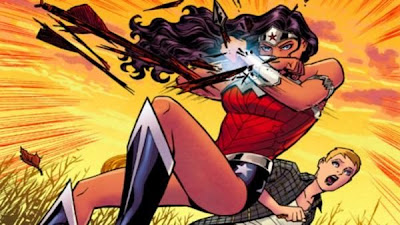 1. I admit, I got lost right after Diana and her new friend the Pantsless Wonder were sucked back to Virginia and the black and green voiceover boxes started popping up.*  Who the hell is this talking?  Is it the horse people?  Who are these horsey people?  Ryan kindly explained that the voiceover was coming from Glowy Eyes and his possessed lady friends back in Singapore from the opening pages.  I was embarrassed to have not picked up on this myself, but in my defense it had been 14 pages since we'd even seen Glowy Eyes and I don't like having to flip back through a comic trying to figure out what I'd missed.

Honestly if I didn't know about this relaunch and the book didn't have a "#1" slapped on the cover, I would have no idea this was the beginning of a new story.  It felt like any other of Ryan's WW issues I'd randomly read over the years where I knew I needed to just let some stuff go because I wasn't completely caught up.

2. Not enough Diana.  For an issue that's attempting to draw in new readers, I would have liked to have seen more Wonder Woman in my Wonder Woman.  I understand that they are trying to lay down a story and it's just the first issue, but new readers are going to be picking this up expecting to see Diana in action.

Like I said, my knowledge of WW and her mythos is less than impressive so I have no idea if this series is going to truly take her back to her roots or what.  My favorite incarnation of WW so far was the Greg Rucka era around 2004-5 of Ambassador Diana where she had no secret identity and a great cast of secondary characters with which to interact.**  I prefer to read comics that have a little joy in them from time to time as opposed to all violence and angst.  Personal preference, of course.

All in all, I liked the art, and wasn't turned off enough by the story or the initial confusion to refuse to read any more.  I'll stick around for a few more issues, at least.

*I'm sure it's not called a voiceover box, but please cut me some slack, I don't know the lingo.
**Minotaur buddy? That's pretty awesome.

I heard ifanboy's review of this, and they said, "eh, the new reader doesn't need much detail, they can just dive right in!"

Clearly, Jamie has pointed out no, no they can't.

Oh DC, WHY did you reboot without rebooting?

I keep wondering how clear DC was to their creative and editorial staff about the fact this was supposed to be a push for NEW readers.

And if it was clear, it appears a major and serious skill set has been lost at DC Comics. I've read multiple comics in this relaunch that simply didn't have any idea how to establish characters, location, what, when and how. Its kind of sad/ remarkable.

Frankly, I thought Wonder Woman did a better job of it than, say, Static. And I thought Blue Beetle COULD have done okay, but then the writer added in all this extraneous DCU junk. It just felt crowded and messy, and unfriendly to a new reader.

On Jamie's advice, I hereby vow never to read a Wonder Woman comic for the rest of my life! I like Jamie's guest post! Really brightens the place up!