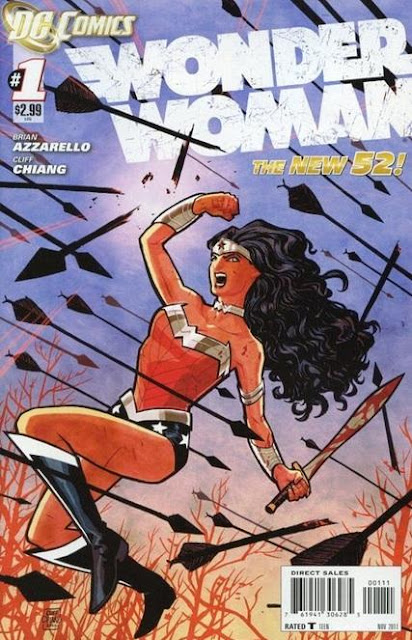 I am not a fan of too much of the work of Brian Azzarello.

I still associate Azzarello with his work on Batman: Broken City, the multi-issue epic that drug out over a year and somehow never managed to tell a story, and Superman: For Tomorrow, which derailed Superman for a year with unrelated and uninspired plotpoints, and a nonsensical conclusion.  And, of course, his Joker graphic novel, which was more or less a testament as to why we don't treat super-villains like actual criminals and psychotics in comics (its not particularly fun reading), but unintentionally raised the question as to why the Joker wasn't put down by a twitchy henchman on his second outing.  And his Luthor series just doesn't hold together as an actual story.

In all honesty, I get the feeling from his work that Azzarello more or less holds a lot of contempt for superheroes, but he knows that's where the money is.  And as long as there are young men looking for "more realistic" superheroes (ie: more blood), then Azzarello is going to be able to move comics and get hired.

Between you, me and the wall, I don't think Azzarello actually knows how to tell a story.  I think he knows how to provide a good set-up, and he knows some interesting beats he wants to put into those stories, but he doesn't seal the deal with either tying the narrative together or with taking the characters through an arc, so much as making them bystanders to a series of events he puts in motion.

Maybe his crime comics do a better job of this, but I don't know.  I still haven't read the 100 Bullets trade I picked up a while back.

So when it comes to Azzarello approaching Wonder Woman, I'm more than a bit skeptical.


I will give him this: the man always has a strong first issue or three, leading you to believe this could go somewhere.  But by issue 7, I'm left wondering what I missed, because characters are just sort of going through motions without any sense of motivation (I literally could not tell you now what either Broken City or For Tomorrow were about if I tried, and I always thought I'd missed an issue of his Luthor series.  And I like to think I generally know how to read.).

So - This first issue of Wonder Woman is mostly actually pretty good.  But, I want to point out, it is good in its way.

Let me also check off this box: Cliff Chiang is a terrific comics artist.  He's going to up the quality and gravitas of any comic he draws.  He might not have been my first choice for a Wonder Woman artist, but he's going to bring something pretty great to the book, and you see that in this first issue.  From his design work, to his page lay-outs to the choreography of the action, Chiang seems like the right person on the right comic at the right time.  His Diana is lovely and powerful, and Chiang understands what Diana would have to be in stature and poise to be Wonder Woman.

This issue sets up a fairly basic plot derived from anyone's high school reading of Edith Hamilton applied to the world of Wonder Woman.  A young woman is in trouble with the Greek Gods.  One of them has decided to make the young woman's life either much harder or much shorter or both.  Hermes sends the young woman to Diana for protection, fight ensues.  And, we get a peek at another potential conflict coming down the pike.

All in all, its a decent issue.  A first issue?  I think it works as one, to an extent.  No, we don't know much yet about Diana, but we do know the world knows who she is, that she's the warrior-princess version of the character, and he relationship with the gods is about what it was since the Perez relaunch of 1986 (ie: Diana does a lot of clean-up work for mortals around the capriciousness of her personal deities).

This certainly isn't an origin story, and I suppose that's okay.  I don't know how well Diana's origin story works these days, and perhaps if a Year One-type effort is necessary, someone else might step up.  Instead, we're thrown straight into the action via the eyes of "Zola", the young woman who's crossed one of the pantheon, now seemingly working less from Olympus and more of the mode of Neil Gaiman's American Gods (and mode they were headed under Rucka, I might add)

Given his history, I'm not sure how much I trust Azzarello to actually carry this story through beyond issue 4.    Its a wait-and-see game.

As this was the week where DC had some serious publicity issues with Catwoman and Red Hood and issues regarding women, its worth noting that in this same issue we get a nude-sleeping Wonder Woman that's mostly passed by without comment.  I'm going to just let that sleeping dog lie, but its one of those things about Wonder Woman that could be read 5 or 6 different ways, from "Greek Warriors don't need pajamas" to "she's comfortable with who she is" to "a warrior would be prepared, and thus know the need for clothing when going to sleep" to "its ridiculous to show skin if its unnecessary" to whatever you can imagine.  And that's part of what makes our relationships as readers so complicated with Wonder Woman.

The other thing I'd point out is that despite a "T" rating (pretty much 12 and up) this is an extremely violent, and surprisingly cruel book.  We get all sorts of ways to maim, stab and kill people and animals in this comic, and it certainly sets the tone for a darker, tougher Wonder Woman book than we might have gotten from another creative team.

What I reject is that we haven't seen this Wonder Woman before.  Frankly, I think this book fits in somewhere near Greg Rucka's relentless-warrior version of Wonder Woman that was set up by the storylines during the Phil Jimenez run.  Unfortunately, at the time, interest in Wonder Woman had dropped to an all-time low and even Rucka's name couldn't push sales up on the title.*  And, of course, DC utterly fumbled the post-Infinite Crisis relaunch of Wonder Woman consistently until giving poor Gail Simone a near unsalvageable set up.

Perhaps Azzarello's name and the relaunch will redraw interest in Wonder Woman, but my money is on Rucka and Jimenez for having created a better realized version of the character.

I LIKE Warrior Wonder Woman.  On my shelf at home, I've got a ridiculous 2-foot state of Wonder Woman wielding a huge battle axe and a smaller statue of her in armor with sword drawn (and several other WW items).  The warrior version of WW is a version I'm very drawn to and with which I'm comfortable.  But like all DC properties, she's got a lot of faces she can wear, and I worry about the long-term viability of not going Batman with the character and having a version out there in comics, TV or somewhere else that's also friendly to younger girls who want to imagine flying invisible planes, riding kangaroos around Paradise Island and just fighting bad guys.  They may not want to read about cutting off arms and mopping up complicated adult messes.

After the mess of the last two attempt to freshen up Wonder Woman (post-Infinite Crisis and whatever JMS was doing with the Member's Only jacket), this one at least feels right, and it feels like a genuine Wonder Woman story.

Hopefully Azzarello will remember how to write a coherent plot that threads through for more than a few issues.

Oh, also:  I prefer the no-pants look on Wonder Woman.  The pants just make her look like someone else.

Thanks for the comprehensive review. We've already touched on some the controversies, so no need rehash that. I would just say again that it's disappointing DC didn't look at this as an opportunity to broaden its audience, particularly with girls and/or women. What a chance they missed to get 10-12 year old girls interested in comics. Given some of the things you mentioned with the violence, cruelty and darker themes, I wouldn't let my daughter near this.

As far as Azzarello is concerned, I think you're right on. He does seem to have some contempt for his audience. His "For Tomorrow" run on Superman was pretentious as it was incomprehensible. I get the sense he's a guy (along with several others in the industry) who thinks he ought to be writing something more "big time." You know, screenplays for Steven Soderbergh or Quentin Tarantino movies. Maybe an Elmore Leonard style novel.

One of the biggest surprises for me of the relaunch has been how dedicated they've been to the stated demographic of males 18-34. Wonder Woman could have gone a lot of directions, and while I am okay with the direction for ME, I am pretty certain you're absolutely right that this is NOT a comic for young people anymore - which is a tragedy considering Marston's intentions and why he created the character. As Superman is returning to his publishing roots, it seems ironic that DC is taking Wonder Woman ever further from her stated goals.

Here's what I'd love to see: DC use the multiple-Earths model to spin off an all ages line (not a kids line - an all ages line) with titles featuring the Big 7 and Justice League. It'd be like the Bizarro-Ultimate Universe.

Well this seems like a good as place as any to tell the story of "Simon's Brush with Brian Azzarello". Spoilers, I did not like the guy so if you don't want to hear anything bad about Azzarello don't read further.

I was at a comic convention in Chicago and I was talking to one of the convention organizers whom I am passingly acquainted with when Azzarello came into the room. He wandered over to where I was talking to the organizer and interrupted our conversation. To which the organizer turned around and turned into a slobbering dog heaping praise on Azzarello, apologizing for not meeting him at the door and then they both wandered off.

Later the organizer came back to me to apologize for dumping me. Explaining that you have to really stroke Azzarello ego or he'd just straight up leave the con and not do his panel.

During the panel Azzarello was a part of he was being interviewed by someone who supposedly is a friend of his came off as a huge dick. His answers were really dripping with contempt for the readers. It was pretty clear that Azzarello writes for himself and not for others. That is, when he could muster up more than a one word answer. I don't fault the moderator in this sense as this guy is a professional interviewer in his day job as well as a comic journalist so he knows how to do a good interview.

Anyway, I wasn't really impressed by him as a person. That is always a problem when you meet a creator of any popular media that you meet. Meeting the real person makes it difficult to divorce the work from the person sometimes. Point in fact I can no longer read anything by Orson Scott Card do to his anti-gay messages.