DC's December Solicits Got Me Thinking...

Its terribly interesting that stories are already surfacing of creative-team shake-ups on some of DC's New 52.  I'm curious if DC is committed to the characters enough to give them a year and chuck creators who aren't pleasing fans (and by employing interns to read reviews, it'd be easy enough to get some data beyond sales, which aren't indicative at this point as EVERYTHING is selling out) and try to, say, make, say Tremendous Man work with a new writer rather than blame Tremendous Man.

There's something to that, I think.  DC has a core of characters that it should be trying to make work, and my assumption is that the New 52 likely contained all of those characters (why else is Aquaman getting a shot by one DC's top talents?).  Heck, we've already heard Static ALSO had a creative shake-up, and I'm not surprised that DC wants that title to work.  Static is incredibly lunchbox friendly.

DC needs to be able to demonstrate to the folks upstairs that they can make The Super Friends sell.  That's the intellectual property.  The people upstairs don't care who makes it work, so long as it works.

But, the solicitations.  DC released solicitations for December books on Monday, and the New 52 party rolls on!

I found the solicits interesting for three major reasons: 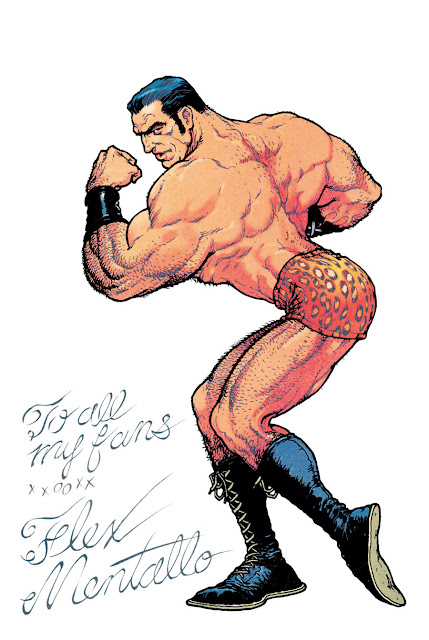 For a quick review, I did write upon Flex before.

I don't know if DC came to terms with Charles Atlas or decided that they have Time-Warner lawyers at their back and on speed dial and screw the mostly defunct Charles Atlas company, or what...  But, yeah, the Atlas company started throwing around lawsuits that I don't think they would have won as this was clearly a parody, but DC caved.

I haven't read Flex Mentallo since 1996 or 1997 when a pal put his issues in my hand.  Its never been reprinted, so...  I'm quite pleased!  Its early DC Morrison and Frank Quitely.  You can read my buddy JasonC's annotations for the series here (Jason has a PhD in awesome, so you can trust him).

2)  By the time I order these comics or start plotting out what I'm going to get, I'll have seen first issues and made plans regarding how I want to follow these titles, or if I'll be following them.  The mad frenzy of "what will this be like?" should be somewhat done.

The hardest part is attempting to divine DC's publication plans.  Will books I was hoping would be collected actually BE collected?   I'm planning to read most Batman and all GL as collections, so I might be just left holding the bag if DC's plans don't jive with my own.

3)  This set of solicitations makes me feel... old.  When it comes to collections, here's a lot of stuff on here that I already own, and I suspect its being offered now for folks who came to comics in the last few years.

There are four "DC Comics Presents" offerings with comics I already have.  I think I have reprints of the source material for the Secret Origins book that's offered.  I bought Batman: Dark Victory when it was coming out.  And the Ed Brubaker/ Darwyn Cooke Catwoman stuff.  The Alan Moore book, it seems I read about seven years ago (and recently re-read portions of it).

In a way, its great news that (a) DC is going to keep their book/ trade side of the store going, and (b) my DC library may be as such that I may be looking forward to a reduction in expenditures on DC books if I already HAVE what DC is selling.  Sure, I suspect this month is a fluke, but its a nice thought.

And, hey, they're re-offering Seven Soldiers of Victory!  To me, that's good stuff.

The solicitations are also shorter than in past offerings, and that's okay.  DC is shoring up their publishing line to stay focused, and I'd rather they have 40 good books on the shelf than 78, only three of which spark my interest (cough.  Marvel.  cough.).

Also, over in Action, Superman is gonna fight a robot.

I've heard a lot of good things about Flex Mentallo but since it has never been reprinted I've never read it. Looks like I'll get my chance now.

I'm amazed that 7 Soldiers of Victory is getting reprinted? Is it actually out of print? I've got all 4 of the original trades and it is pretty great stuff. I love how both Demon Knights and Frankenstein have borrowed from it in the DCnU.

Here are three things I notice will reading the solicits

1) More than one storyline wraps up with issue #4. That is different from the 5 or 6 issues you usually see a storyline going for. I wonder if we'll get 4 issue trades.

2) Barbara Gorden Batgirl is in 3 DCnU titles this month, Batgirl, Birds of Prey and Nightwing. Plus she seems to be featured in DC Comics Presents Batman the Secret City. That's a lot of Babs.

3) The Demon Knights crew seems to be related or perhaps the precursor to Stormwatch.

1) Yeah, as I mentioned, I think DC is keeping these guys on a pretty short leash intentionally. Don't give readers too much time to give up on a book because of a creative team.

2) That IS a lot of Babs and very little of it handled by Simone. I think its very early to be guest-starring Babs, but I'm also not trying to make her a star of the DCU.

1) Out of all the books I've read I've only given up on one so far and it's been because of art and not story.

2) I heard that Simone was not exactly thrilled that Batgirl is showing up in Birds of Prey. She's not mad at Swierczynski rather she's upset she did not get the heads up from editorial. There seems to be a mandate to push Babs.

3) SHIELD is a pretty good retcon over in the Marvel Universe.

I'd love to see Babs, Kara and Diana steal some focus in the DCU. I just think DC needs to remember that those characters don't work well as a guest-star until those characters get really cleanly defined, and all 3 are up for grabs at the moment.

I was going to grab the SHIELD storyline at some point as a collection.

Also, speaking of objectification of women I'm hearing some really horrible things about the first Catwoman and Red Hood issues. I'm not surprised about the Red Hood one as I can not buy that any harder than I'm already not buying it but I'm a bit disappointed in Catwoman.

1. My impression was that the Charles Atlas suit had to be resolved in order for the Flex Mentallo issues of Doom Patrol to be released in trade, and that was several years ago. If true, there's been no real excuse for holding up publication of a Flex Mentallo collection . . .

2. So, I wasn't up on the whole Barbara Gordon / Oracle thing until the recent ****storm about it and the nu 52 online. However, I haven't seen (and maybe I just haven't looked hard enough for) any comments on the appearance of Oracle as a digital Batgirl in the latest Batman, Inc. I almost felt it was Morrison's weird commentary on / bridging over to the new continuity. I'm sure someone out there more up on the big picture has something more insightful to say about that, though.

@simon - Laura Hudson of Comics Alliance made some comments about it today (DC hates women, etc...). I dunno.

The page from Red Hood she posted looked like a page from any Gail Simone comic that would have been applauded for naughty sexiness. And I also am steering way clear of a book featuring 3 of my least favorite DC characters.

The first publicity on Catwoman said "this will be SEXY". So, I guess its gonna be sexy. The image Hudson posted was more confusing than sexy. And I wasn't buying a Judd Winick "edgy" book, anyway, at least partially because I can't take anymore of his ham-handed depictions of adult relationships.

Its sad, because I haven't read any Catwoman since the last series ended.

I dunno. I think I'm going to do a post called "Sex and Superheroes" and just talk it out.

@alistair - I don't know exactly what happened with Atlas, but my recollection was that WB capitulated to Atlas, likely in disbelief that this comic was importnat enough to worry about.

I hadn't read Batman Inc. the same way, but I can see that, I guess. I was so shocked by Morrison's 90's-era VR concept that I now believe he must be working away on a refurbed Packard-Bell 386.

BUT, it only explicitly references the Doom Patrol episode . . . could there have been a different, more tenable suit for the mini-series? Seems highly unlikely to me.

@Ryan - I guess I shouldn't comment on books I haven't read. I suppose those two pages could be taken out of context. Although as long time Teen Titans reader I take umbrage with Starfire's portrayal. She was always shown to have a different attitude towards sex and sexuality because of her upbringing in a different alien culture. But that one page interaction between Starfire and Arsenal was just crass.

As for Batman and Catwoman hooking up, sure it was bound to happen but did it have to happen in the first issue of Catwoman's ongoing?

I don't disagree that the the Starfire/ Arsenal conversation was crass. What I guess I just shrug off is any shock at this point or any suggestion that DC wants for kids to read their comics. And I'm one of those guys who finds the increasingly grotesque violence in the Green Lantern titles far, far more questionable than comic characters having the same attitude about sex as characters as any sitcom on TV.

I dunno. I suspect we're seeing part of what will be the new normal as we move out of the target demo.

@horus - my only real impression from my reading on this a while back was that it was resolved. It did seem like Paul Levitz was often oddly cautious about stirring up bad memories or trouble, so maybe it just took Levitz stepping aside.

@Ryan, it really seems like they are targeting a younger i.e. teenage boy demographic. I guess I'll keep following the writers I like (Cornell, Lemire, Simone) and not get drawn into a bunch of other titles.

That's more or less what I'm choosing to do. At some point I have to be aware that I will likely age right out of new comics. Less and less will appeal to me.

Many years ago I was rolling my eyes at a trailer for a movie and groaning, and Jamie said to me "You know, that wasn't meant for you." And while I agree with fighting the social inequity issues of comics, I think you do it by creating new comics that meet your standards or supporting those that do (and not reading everything as an insult to you, personally).

My biggest concern with the New 52 was that in seeking a new audience, DC would be seeking a younger audience with different tastes and it would leave me behind, wondering what happened. And I think in some places they have.

But I don't think its too hard to look at the solicits and see what these dudes are selling and just avoid buying it.