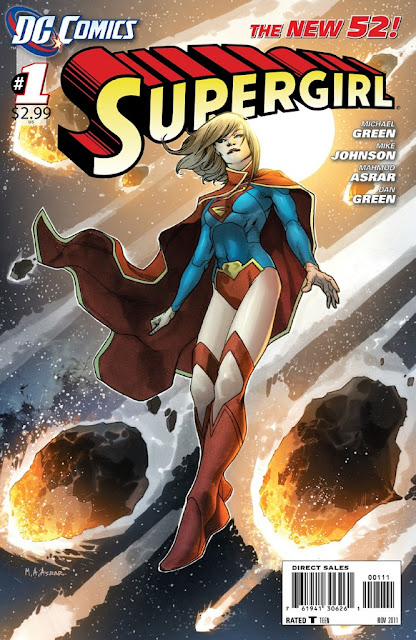 Firstly, because I see no way to avoid discussing it:  I think the new Supergirl costume is absolutely great, at least from the top of her head to her navel.  And then, somehow, as you head south the rest of the outfit is a bit of a trainwreck.  At least how its being drawn in this comic.

I bring this up because, as a reader, I became utterly distracted by how much I could not not notice how terrible I found Supergirl's new get-up.  Why is she wearing a strange red patch over her, uh, lower abdomen?  I assumed I just wasn't getting how this would work in the preview art, but no...  I don't care what planet she's from - that just seems poorly conceived.  It really looks like some sort of awkward medical device or improvised covering when she had to run out of the house with no pants on.


And, in practice, you realize how absurd the knee-cut boots really are, especially in that the artist really doesn't seem to know how they're supposed to fit on her legs whenever she bends her knees.

After dealing with Michael Turner's stuck-in-2003 design, I had such high hopes for what DC would do with a new costume, and who knows?  Perhaps this is all semi-temporary.  But right now its an indicator of the approach to the character and its not a very welcome sign.

Secondly, Michael Green and Mike Johnson have never particularly demonstrated any particular skill as writers at DC (although I recall DC lauding their credentials at some point as TV writers, which, whatever), and here they continue the trend of writing mostly forgettable, paint-by-numbers comics.  There's no story here what-so-ever.  I assume they're "writing for the trade", but instead they write a comic in which a few things occur, but nothing really happens.

Supergirl arrives on Earth in a... rock?  space ship?  tea cup from The Mad Hatter's Tea Party that went off the tracks?  Who knows?  Not important.  But when she crawls out of a hole, she is assaulted for absolutely no reason by men in the bulky armored suits that must cost less than a skateboard in the DCU for all the human-tank body suits you see in these comics.  Being Supergirl, she fights them as they pile on her (nice alien protocols, Earthmen!)  and then Superman shows up.  The end.

I share the plot because, really, that's it.  And its so empty and devoid of anything special or interesting that it makes you pine for the days of recent yesteryear when Jeph Loeb was penning nonsensical stories about Kara throwing in with Darkseid for no reason.  If DC is trying to grab new readers, I can't begin to guess why this issue or this approach struck anyone in editorial as particularly fresh or interesting.  And I really, really can't figure out how the red diaper look made it off the idea board.  Yeesh.

As per character: we get none.  In the comic, the only people who speak to each other are a few faceless folks from some government office sending the cyber-goons after Supergirl and the cyber-goons sort of bellowing at Kara with the usual "freeze!" filler dialog you see in comics when cyber-goons show up.*  The rest is Kara's internal monologue, which isn't insightful or useful.

I'm crossing my arms in a huff, because I think this was a pretty poor way to spend $3 and a chance to relaunch the troubled Supergirl franchise.

Unlike this week's Catwoman comics or the controversial Red Hood, I can't say this comic isn't for a particular audience, because there's not enough to grab onto to get a feel of the point of view of the writers.  So little happens, I don't know who would get excited by this.

I kind of like Asrar's art, by the way.  I think if he had a script to work with, he'd be just fine.  But he also needs to figure out what Kara's face looks like and stick with it.  I don't usually pick on these things, and maybe the fact the book had two inkers (one of which was Asrar) tells us something, but her head changes a bit throughout the comic.

I am giving all Superman-related titles 4 issues, so we'll see what happens.