We didn't exactly get a crippling flood of responses to this year's Halloween interactivity. I don't know if you're still worn out from last year or you didn't feel like putting up with my shenanigans for a second go-round. Maybe its the economy or sun spots. You're an unpredictable bunch.


Its a SPOOOOKY time of year, full of ghouls and goblins and sugar cookies.  And we feel this lends itself to a bit of personal storytelling.  I may personally be very scared of the unquiet dead in ghost form, and you might find the idea of the Moth Man terrifying, but that's what makes it interesting.  We've all got our thing.


This year we had two questions we asked.  Two fairly simple questions, I thought.   Well, not questions you people wanted to answer.


Luckily, we can always count on my brother, Steanso, to make sure I get at least one response.  I should note:  He kept asking me if he "won". So, everybody, he "won", okay. Let him have this.

Does anyone else remember Q?  That giant, flying lizard was somehow both cool and a little scary when I was a kid.  Mostly I just liked big, giant monsters (I was a big Godzilla fan since the time I was about toddler size), and when I saw Q as a pretty young kid, it struck me as some kind of weird American take on the Godzilla theme. 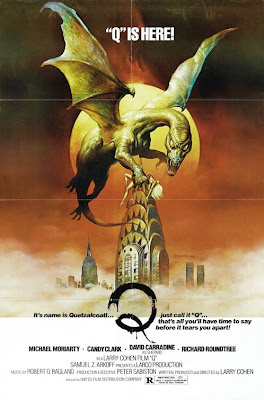 Also C.H.U.D.  They were cannibalistic and humanoid and they lived under our feat.  Who wouldn't be made a little nervous by that? 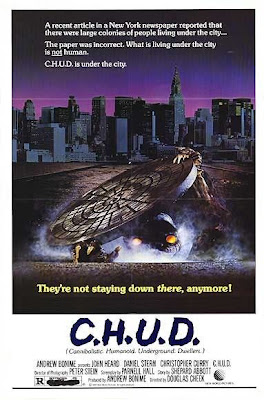 And I liked Maximum Overdrive.  Giant, killer trucks.  It was funny and stupid, but the idea of being run over by giant, sentient trucks was still both entertaining and a little troubling.  ...I just read on Wikipedia that Stephen King (in his only directorial attempt) has now said that he was "coked out of his mind" during production of the movie and didn't really know what he was doing.  Somehow that movie about the angry trucks makes a little more sense now.

Well, one year I was The Blair Witch.  I wore a set of bobbly antennas and a black tee shirt.  The Blair Witch is muy mysterioso and leaves a lot of room for interpretation.

Another year I started out wearing a cool jawa costume that looked just like something out of the movie.  It had a big hood, a dark cover over the face, and eyes that lit up.  Cool costume for a little kid.  But it was also made of think, burlapish material and it was really hot.  Eventually I ended up taking off the hood and walking the streets as a small, sweaty Obi Wan Kenobi.  The neighbors didn't really get why a little kid would want to dress up as a short, stinky version of the old man from the Star Wars movies, but they gave me candy, anyway.

I've also been various things just involved clown makeup or fake blood (sometimes at the same time).  I used to wear this stuff when my band was playing Halloween gigs because it would be too hot to wear a mask.  Once the band got rocking, though, the makeup or fake blood would usually run, and I'd just end up looking like some kind of bruised, multicolored mess.  Nothin' to be proud of.

I should mention - I was talking to SimonUK before watching "The Thing" last week, and he brought up "Q".

Apparently the director felt the 1998 version of "Godzilla" was just a shoddy rip-off of "Q".

I watched "Q" in high school, but I admit - I don't remember anything about it. My now-dead aversion to horror movies also meant that I missed CHUD and Maximum Overdrive. I have these huge gaps in my movie inventory.

Well, any timne you're up for a viewing of any of those movies, you just let me know. I'll pop the popcorn.

Please tell me you got more than one response.

I kept waiting for your arm-twisting email before entering, but I never got one, so ..

We got more than one, but not as many as last year.