We cruise into Day 4 of our interactivity responses with some words from my house-mate, pal and beloved bride, Jamie (you may call her McSteans, if you so choose).

Not being the scary movie connoisseur that many of you readers likely are, I was at first stumped by this question. Most of the horror/monster/creepy movies I've seen and have liked are pretty well known and loved. So instead of an "under-appreciated" film, I have two bad movies I've seen too many times, thanks to boredom and HBO, that were not to my knowledge, popular.

The first is Teen Witch, the 1989 Robin Lively vehicle where our protagonist is a cute girl who for some reason (the script says so) is unpopular. She meets a tiny witch (character actress Zelda Rubenstein) who gives her a special witchy necklace which Teen Witch uses to make herself popular (of course). I don't remember much else about the movie, but I think we can safely guess lessons are learned about being happy with yourself or being popular isn't all it's cracked up to be, or something like that. The one scene that has been etched permanently into my brain is the jaw droppingly bad sequence where Teen Witch uses her new witchy powers to make her best friend into a rapper so her friend can impress a group of 80s "toughs" (guys in acid washed jeans with mullets doing a choreographed musical routine next to their car). At least I think that's what was happening. See for yourself, if you dare:

The other movie I've seen too much is the sequel to Critters, the aptly named Critters 2. I think the original Critters was conceived attempting to cash in on the popularity of Gremlins and must have been successful enough to green light not one but three additional movies. Being easily spooked as a youngster (E.T. freaked me out, for God's sake) the "critters" themselves seemed relatively unscary. Plus they got style points for rolling themselves everywhere for transportation and assembling in the movie's climax to form a giant Super Critter. 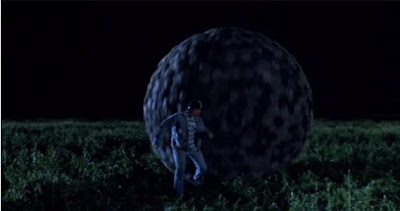 This is why we don't have more cats

When I was about seven, my mom made me a black cat costume for Halloween. I loved it so much I wore it around the house all the damn time, all year long. It scared the crap out of our actual cat, but that didn't stop me. The cat costume made a repeat Halloween appearance the following year. By year three, I had clearly outgrown the stupid thing, but was determined to wear it once again. My brilliant idea was to scuzz it up a bit, wear weird makeup, colorful socks, and go as a "punk cat". Needless to say, I looked ridiculous. My mom just kind of shook her head and didn't say much, clearly knowing this was a bad call.

You know when you get a group of trick-or-treaters and there's always that one kid where you're just not sure where they were going with their outfit so instead of saying, "oh what a cute pirate/vampire/Batman!" you just blink for a second and say, "Happy Halloween!"? That was me.

What? No picture of Junk Cat?

I believe you personally possess the only known copies of Junk Cat picture.

It is waaaaaay past time that you put together your all girl punk rock group, Punk Cat.