A recent episode of NPR radio documentary program This American Life featured bits of the story from the 2011 movie in telling its own version of the story of a gang of card counting Christians, Holy Rollers: The True Story of Card Counting Christians.  It's currently streaming on Netflix, so you can check it out for yourselves. 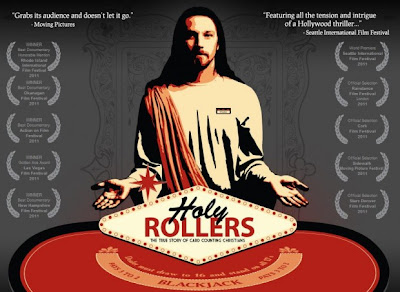 The doc follows a group of young people, mostly under 30 I'd guess, who are a wide variety of youth ministers, parishioners, pastors of small congregations and then just friends and hangers-on who follow a few leaders in the group into the wacky world of card counting in order to try to beat the house at casinos all over the country.  They form a small business which actually raises investment capital from folks they know and within the group, and then redistributes the winnings back out among the investors, the management and the gamblers.


It's a weird movie to talk about mostly because I have pages of criticism I could write about the subjects of the film themselves, their naivete, their ability to rationalize, their lack of critical thinking and the small minded manipulation and ego of their leader (and the fact that everyone just seems to go along with it blindly).  I don't think I buy any of their BS about trying to hurt casinos when they're not exactly redistributing the wealth to the needy or Gamblers Anonymous, but I do believe the subjects did buy everything the guys who were winning were telling them.  Pyramid schemes find their marks somewhere, you know?

What was odd watching the film was that all that stuff is readily apparent, but the movie never really wants to deal with it in any serious way.  It's not that the movie makes it look like everything is hunky-dorey in Christian Gambling Land, but the director never really seems willing to really explore the implications of what these guys are up to from a religious level aside from acknowledging this is a bit iffy, while repeatedly hammering on the seeming irony of the situation and title of the movie with a bit of self-satisfied snark.  In some ways, I wondered if the friendship that I assume pre-existed the film or formed during the film meant that the director wasn't really interested in tilling the soil he'd shown us.

To the director's credit, he did get cameras inside casinos, does show the ups and downs of the group as they struggle with rapid expansion, a lack of training, and managed to stay with the group for three years and get the subjects to be candid (until there's an actual problem, and then everything is just swept under the rug).    But there's something off about the pacing and how each title-carded section unfolds that takes the straightforward part of the story and makes it take a wee bit too long in every section.

Unfortunately, This American Life's very brief story on the group asks the questions you'd probably have from watching the movie a bit better than the movie, it's shorter while covering more or less the same curve.  To some extent, the question of "well how is THAT going to work?" resolves itself, and despite all the money that's getting mentioned and kicked around...  that's a lot for maybe one to five people, but with all the people in the room?  It's hard to see how this is better than trying to make it into middle-management at a Target.

In the end, I was a wee bit bored by the movie, which I hadn't expected at all.  At the 30 minute mark I realized how much was left and cracked the laptop.