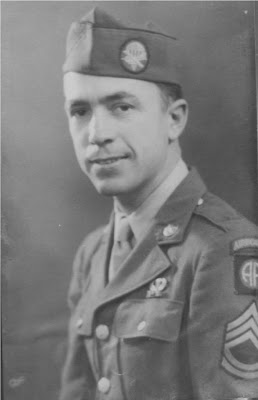 My grandfather passed on Tuesday morning at the age of 93.

As my dad's parents had divorced when he was a kid, Marvin was my father's step father, and so while there's no blood relation, there's no question he was my grandfather if all the usual granddad criteria apply.

The family loves the above photo of a young Marvin Ross, partially because his service in the 82nd Airborne during World War II is household legend.  Africa.  Italy.  France.  All this for a farm kid from Kansas who worked in FDR's NYA farms to make ends meet.  With the end of World War II, he returned stateside, earned his degree and eventually worked for Eastern Airlines where he helped roll out the first computer systems for the company.

In many ways, his life often read to me as a Rosetta Stone for 20th Century America.

It can't go without saying that he was heavily involved with his local Legion post, serving as President, and active in the activities of the American Legion.

He and my grandmother visited often, hosted us in Florida (in Miami and then in Ocala), and my folks made certain we were as close as could be despite the geographic distance.

The more I learned of his days in the military and then his career in technology, the more questions I had, and he was always willing to share a story or two about dealing with punchcards or taking fire in a house in Italy.

In recent years, after the passing of my grandmother, he'd lived first in Houston near my folks, and more recently in Las Vegas with his son, Frank.  The last few years was hard of hearing, but no less sharp when he was chatting (and you were two feet away and shouting).

I spoke with Frank and he reported that my grandfather spent the Fourth with his family, reportedly just his usual self.

He'll be deeply missed by us all.

I hope you'll forgive me, but due to the personal nature of this post, I am closing comments.