"Well," as Jamie said as we pulled away from the theater, "That was most definitely a Wes Anderson movie."

I have a hard time criticizing directors or musicians for continuing to employ some of their trademarks in their work.  Anderson's barely-there dialog direction, the same four or five shots he uses over and over in a rhythmic pattern (usually punctuated with a particularly lovely and well framed surprising shot: think the kid in the pool in Rushmore).

Nor can you hold the fact that none of his narratives ever really see closure against him.  His are not movies that end with a wedding (well, maybe Royal Tenenbaums) but suggest that this is a particularly important juncture in the lives of many people: now let us observe. 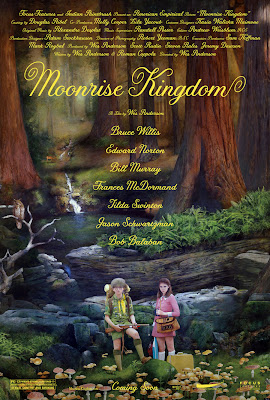 If any of Anderson's affectations irritate you, you've been put on notice by his prior work, and this film is not for you.*  This is most definitely not the movie where he changes things up and goes for a Dogma 95 verite style.  If you're familiar with his work and somehow still keep paying to see it, then this may be a movie for you.  I'm fond of Anderson's aesthetic, which may have overwhelmed The Life Aquatic and, to a degree, The Fantastic Mr. Fox, but I appreciate that he's got his own thing going on.

In some ways, much as I wanted to grab 15-year-old me and take him to see Rushmore, I would have loved to have had 12 year old me in tow for this one.  It definitely understands the inevitability of a Lord of the Flies scenario when dealing with boys of that age, of how confusing and useless adults can seem (and how they have their own messes) and even the passion you might have applied to reading X-Men comics or scouting skills that you might also turn to a girl who actually pays you heed at that awful stage in life.  Imagine were love requited at that age...

The cast is better than I'd heard by word of mouth, and Tilda Swinton was typically amazing even in her small part.  But Jason Schwartzman's small role, no doubt written specifically for him, is pure gold.  The herd of child actors, especially the two leads, are pretty great.  And the moment of decision for the Khaki Scouts in their treehouse was the sort of monumental scene for kids that felt true, even in its ludicrousness.

In short, I enjoyed it.  No real surprises, even down to <spoiler> the needless death of a pet </spoiler>.  But it was a lovely film, and a nice bit of counter-programming to all the sci-fi and superhero stuff of the past year.  This I say with tickets bough to see Dark Knight Rises next Saturday.


*seriously, if I hear any of you tell me you didn't like anything since Royal Tenenbaums but you still went to see this and you're complaining?  What are you doing?  Also, the people who trapped us so they could watch the credits?  Stop it.  You're not impressing anyone seeing who 3rd Best Boy was on the movie.  I assure you he'd already left the theater before his name rolled.
Posted by The League at 7/14/2012 11:03:00 PM