Toys That Should Not Be: The Steve Jobs Statue

When I started blogging the collectibles market was just really taking off.  We quit doing Toys That Should Not Be as, really, what I'd advise is to just open the Diamond Previews Catalog and flip through the thing.  Every page or two, you'll find something that makes you die a little inside.

And I'm not even talking about the import Manga statues with the removable clothing.

If you're not done grieving Apple Overlord Steve Jobs, you can now make everyone who enters your home or office stop and ask the exact same question in under two minutes:  Is that Steve Jobs? 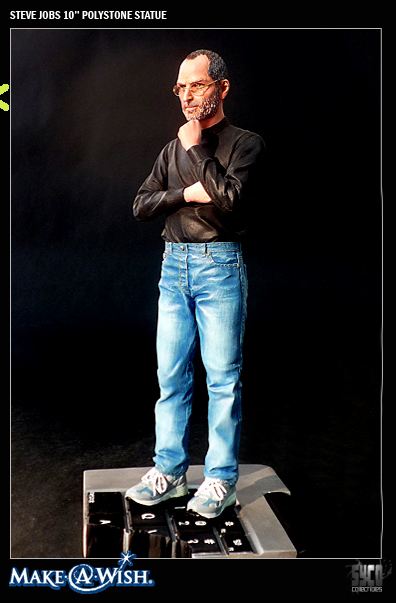 Syco Collectibles has introduced the Steve Jobs statue.  Only $100, this fantastic piece of artistry looks pretty much like a tiny Steve Jobs, complete with jeans, scrubby beard and black turtle neck and posed like Scorpio planning his attack on humanity from his undersea base.  Only, you know, tiny.  Standing on the edge of a MacBook in discount store sneakers.

I have to say, I think it's a hell of a conversation piece, and that conversation may just be your co-worker leaving your office and commenting to your colleagues about how you're still really hung up on losing the guy who yelled at people until the iPhone was cooler.

To their credit, Syco is sending part of the proceeds to the Make-A-Wish Foundation, and we find that admirable enough that we've ordered four of these, so Steve Jobs can look down upon us from every corner of the room.
Posted by The League at 7/09/2012 11:46:00 AM