You know, when we said we were going out of town a lot of people asked us "where are you going to eat?" or made suggestions for where we should go. In fact, nobody seemed to care what touristy stuff we were going to do, all anybody talked about was restaurants.  Chicago is a vast tapestry of food options, and I appreciate all the suggestions, but could not possibly have considered travelling to even a quarter of what was suggested due to geography and other factors.


Do not worry:  We had our day of nice meals where we had a terrific breakfast and a stellar dinner, but, seriously, I'm not made out of money, and unless all we were going to do in this center of culture and history was pat ourselves on the back for eating poached mushrooms or whatever the hell, our money was going elsewhere during this trip.

Don't worry, we ate in a couple tourist dumps and paid plenty. But I also ate lunch one day from the refrigerated section at CVS. And yet, somehow, still managed to have a swell time.

But, if you're looking for a food adventure, the great thing about America is that you need never go far. On the way back from the airport, Jamie said "just go get Taco Bell", and indeed, we did.

I took the opportunity to get myself the Doritos Loco Taco. 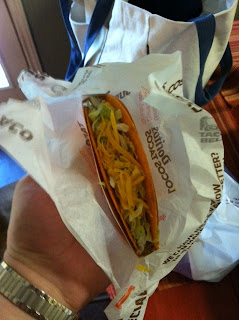 There it is in all it's glory.  It looks and smells pretty much like a Taco Bell crunchy taco.  The shell is lightly dusted with the Doritos cheese, notorious for finding its way onto one's fingers and then their white linen pants leaving orange fingerprints.  Fortunately, Taco Bell lovingly wraps each taco in a specialized cardboard taco protector so one need never muss their fingers, nor stain their favorite seersucker suit. 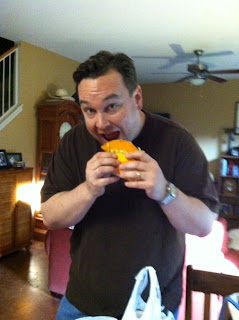 Here I am moments from tasting the taco.  I'm pretty excited.  Jamie really was discouraging this whole enterprise and probably would have supported me just chucking the damn thing in the trash. 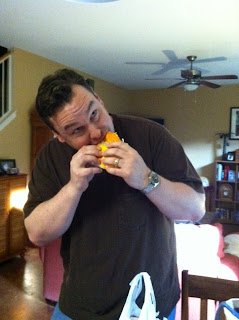 Here I am enjoying my first, savory bite and trying to comprehend the wild palette of flavors hitting my tongue. 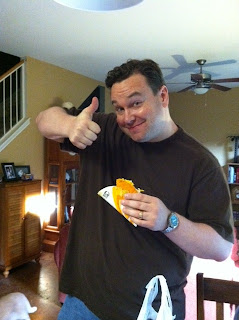 That's not a thumbs up of awesomeness.  That's a thumbs-up of "I'm not going to barf".  The truth is, the taco isn't all that bad.  It basically tastes like everything else at Taco Bell, only there's a mild zing of that Doritos cheese flavor somewhere in there.

To be honest, it's nether good nor bad.  Your mileage will vary depending on whether you like Taco Bell crunchy tacos to begin with, and if you like the flavor of Doritos.  My guess is that the demographic for Doritos and Taco Bell is a near total-eclipse on the Venn Diagram.  Whether it's worth the extra money for you to taste the weird faux-cheesiness of Doritos (something I'm usually only into when beer is involved) is up to you.

Apparently Taco Bell has already sold more of these than there are people in the US, so I guess the matter of whether this was a good idea will settle itself.
Posted by The League at 7/01/2012 09:57:00 PM

I can't quite comprehend this. In fact, I thought it was a joke the first time someone mentioned it around me. I don't really eat fast food, and I don't have cable, so these newfangled heart attack meal combos are foreign to me. Plus, I really only like chips when I'm eating a sandwich. And then I want Baked Lays or Sun Chips. (They don't call me picky for nothin')

I also heard via Twitter that BK now has a bacon sundae. Just...no. Please do not take that bad boy for a spin.

Well, long ago we used to do taste tests on the blog that preceded this one. Whenever we saw a product on the shelf or advertised that looked like a terrible idea, we were all in.

This food product sparked in us a memory of days of blogging gone by. I wouldn't expect to see it become a staple of this site, but we were curious.

Truthfully, we've seen people crush Doritos and other chips into sandwiches for years. This doesn't seem all THAT crazy, but the ad campaign has been sort of ridiculous.

Sources are reporting that a "Cooler Ranch" variation is in the works...can't wait!

Is there anyway I can convince you to taste test the bacon shake?

I would say "cash money", but then we head down a slippery slope that ends with me dancing for coins thrown at my feet.