The first batch of MonkeyBrain Comics is now available for about $6 for 5 comics.  I don't think I've seen that kind of value since I was in high school*, so I want to get that out of the way first and foremost.  Secondly, all of the books are worth at least checking out.  They all hit different beats and will find their specific readerships.  Of the five, three really hit a chord with me, but at that price, I'll still follow all five for a while because, seriously... a dollar.  That's gum money.

I'll probably talk about Aesop's Ark and Bandette later, but I thought that first I should cover the book by MonkeyBrain co-founder, Chris Roberson.

Roberson and artist Dennis Culver paired to bring to life Edison Rex, a sort of Silver Age Superman and Lex Luthor homage that takes a decidedly interesting turn in the first issue, setting up the nemesis of Earth's greatest hero as the protagonist of the book, but not in the way you might expect. 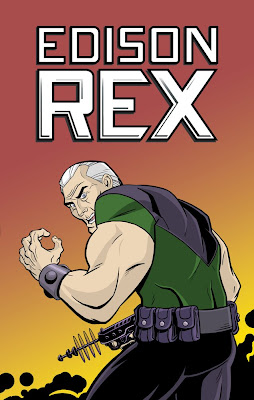 The book is pure gold for both Superman fans and fans of the broad concept of Silver Age superheroics, lantern jawed do-gooders and single-minded mad scientists intent on ruling the world.  It's not that other comics haven't explored some of this territory, be it Waid's Empire** or, now that I think on it, Waid's Incorruptible.  Roberson, however, takes a lighter touch, providing me with my favorite comics quote of the month:


Lord Edison!  Are you certain we should not be conquering, instead?

The tone is almost Atomic Robo in flavor, and that works well for me in my jaded old age of wanting to have fun reading my funny books, especially those about science villains with plans for world domination.  I've no doubt that by issue 2 or 3, the riff on Superman will be in the past and we'll be moving on to new pastures, but the twist in this makes the homage totally worth it.

The art style feels appropriate in a cartoony, animation-ready style, that totally fits modern sensibilities and is broad enough to handle what I think will be a world with giant robots, laser pistols and the occasional caped superhero.  Well done.

The comics weren't supposed to be out as early as they were released.  But released they are! I suppose with Comixology seeing MonkeyBrain Comics trending practically worldwide on Twitter, the idea of striking while the iron was hot meant that they did not want to make anybody wait any longer.  You can jump online and check out the full line at Comixology!

It's a dollar, for goodness sake.  Give it a shot.

*and given inflation, maybe not since Middle School when I could slip a copy of Batman on the conveyor belt with the family groceries and my mom didn't blink at the cover price.

I too remember the days where $5 could get me 5 comics. I remember when the cover price jumped to $1.25 which meant I could only by 4 comics per week on my allowance. Now, those were tough times deciding what titles to cut.

Regardless, at $6 I tried all 5 title and I have to say for the majority of them I really enjoyed them. At that price I'm sure I'll give the second issue of the titles a try and decide after that which ones really grab me.