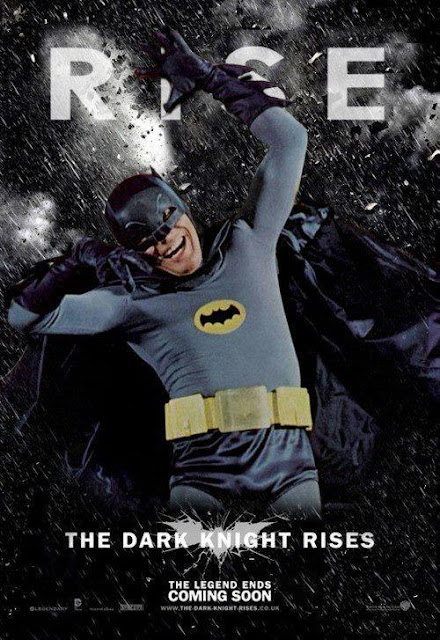 It's no secret that I'm totally in the bag for Chris Nolan's take on Batman.  I believe he's a strong storyteller in his way, smart behind the lens, able to create great tension from both an action perspective and a character perspective.  And I like that he's pushed audiences using something like Batman that we've seen handled an infinite number of ways with various degrees of success.


There's a strong argument that the recent Batman movies make more sense than 85% of what DC has put out as Batman product since the early 90's, and are much stronger from a pure narrative standpoint.  Sure, I'd love a sort of Denny O'Neil/ Neal Adams take on Batman, or an Alan Grant/ Norm Breyfogle Batman solving mysteries and karate chopping the hell out of toughs and ninjas and whatnot while wearing tights, but if you're going to make a movie about an urban vigilante who funds himself with his family fortune of literally billions of dollars, this works as well as I think you can expect.

Straight up, Dark Knight for all it's logical contortions in the 3rd act, may be one of my favorite movies (movies in general, not just superhero movies) on a pure, visceral level.  Hospital explosions, moral quandries on a boat, trucks flipping over, bat-pods emerging from tanks...  I've seen it ten times and I still white knuckle through that film.  Having now been to Chicago, I think I also get a lot more of what Nolan had in mind regarding geography and use of the city as a backdrop, and why he picked Chicago as the backdrop for at least that one movie.

I'll always appreciate how flexible Batman is as a concept.  As much as I count myself a fan of Nolan's films, I'm just as much a fan of Adam West and Burt Ward, of the Frank Miller comics, of the Silver Age and Batman: Brave and the Bold.  He's our all-purpose American hero, able to work in so many milieus that there's a Batman out there for pretty much everybody.  Of course, that causes some audience confusion as evidenced by the young kids I saw seeing Dark Knight (parents: no).

So, of course it will be a monumental disappointment if this movie is no good.  But I have faith that Nolan is going to go out on a strong note, that the cast will be superb, the story another taught thriller and Anne Hathaway is Anne Hathaway and on the other end of the spectrum, Michael Caine is Michael Caine.

When I suffered through Mission Impossible 4: Ghost Protocol (no more Cruise, not ever), they showed the opening sequence of The Dark Knight Rises in IMAX, and...  I don't want to oversell it, but it topped almost all the stunts in the last movie and had that same feeling of ice cold intensity.  I have high hopes.

As much comic-booky fun as I had watching Avengers (and I did enjoy it for all it's goofiness), this is the one I've been waiting for.  Let's hope it doesn't stink.

Here's my surprisingly mild review for Batman Begins.  Or at least my report that I'd seen the movie.

You know, it's still a great movie, but it's a transitional movie between the wild sets and cartoony set pieces of the Joel Schumacher-era.  It was almost like they needed to shift gears, and going straight to what Nolan did in Dark Knight would have caused audience whiplash.  Looking at my own review now, I'm sort of shocked I read as almost tepid, too concerned about the comics and not enough about the movie itself, which I suppose is a hallmark of the reviews around here.

How does that not drive you guys crazy?

Suffice it to say, I still really like that movie, even if I think Maggie Gyllenhaal was a huge step up for casting.

I do vaguely recall wanting something a bit more Batman: Year One, and being okay with the insertion of ninjas, but maybe wishing we'd gotten that 1970's, mean streets approach.  I'm over all that now.

I saw Dark Knight pretty well after it's release.  You can read my review here.

I can almost feel the restraint in my own voice in the review, when all I wanted to write was "oh my GOD, you have to go see this thing!"  Hilariously, I predicted it might not do boffo box office.  This is why you must never listen to me.

"I've seen it ten times and I still white knuckle through that film." I couldn't agree more. When I think about The Dark Knight that's what really gets me. I mean I know Batman is going to win cause he's the hero but there is such a level of tension in the movie that makes me think that he may not just save the day.

My friend Chris and I were just discussing TDK and the upcoming rises at lunch. I think Nolan has done a masterful job of putting me off my game. In most cases I can tell you with 98% certainty everything that is going to happen in a given movie. But with Nolan's Batman, I really can't tell and that ratchets up the tension levels to near apocalyptic scales for me. Can't wait to see it.

A mop with it's bristles dyed black is a step up from Katie Holmes. Note, I'm not saying anything against Maggie Gyllenhaal as I think she is a great actress.