October Read: At the Mountains of Madness (1930's)

Despite his profound impact on much of the fiction I consume, I've never read or consumed any actual HP Lovecraft.  Like everything else, I just never got around to it.

What I'd read about Lovecraft's writing was interesting.  Even by his fans, he's not considered to know much about how to turn a phrase.  The term "purple prose" comes up a lot in the sniffier descriptions, but everyone acknowledges his wild imagination and ability to generate a palpable sense of dread that other writers strive for, but force with nameable threats and terrors.

With Halloween coming, I figured it would be a good time to finally delve in and check out what all the fuss was about. 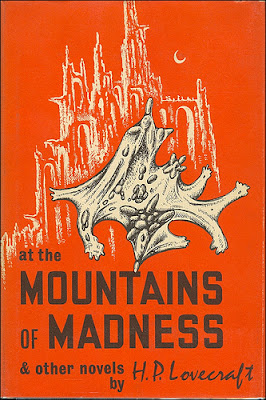 I will not say At the Mountains of Madness is my new favorite novel(la).  But it is a fascinating work - complete in its mythology, striking in its building of atmosphere and dread, and it feels like a single man's efforts to restrain an entire culture's imagination and mythologies, pouring them out onto the page with force rather than cultivating smaller ideas and lulling the reader with craft.

A large scientific expedition heads to the Antarctic in the heady days of mid-20th Century scientific discovery, looking to perform geological surveys, when they push further into unexplored territory than anyone before them.  And, of course, they find something beneath the ice and rock.

If this sounds familiar to your fans of John Carpenter's The Thing, well...  it was one of those moments that I keep running into where you stumble over the inspiration for something you thought was pretty clever (yes, I am aware that The Thing is a remake of the Howard Hawks film, but...).

The structure of the book is quite odd.  There's no character development, no real real conflict for the narrator, and vast expanses of the novella are much more about descriptions and world building - the standard issue of all science fiction and fantasy novels - than it is about the actual plot.  And, if I can do this without driving you Lovecraft fans crazy, while he clearly checked with a thesaurus for as many variations on "terror" as possible, that "purple prose" comment stems from Lovecraft's insistence on associating every word with an adjective.  Sooner or later - you run out of terms that mean "scary".

Also - I am now intimately familiar with usage of the term "cyclopean".  Well done, Mr. Lovecraft.

But, as I'd read - Lovecraft does build a world that's astounding, and there's no denying the creepy vibe he infuses into the work.  He's a master of demonstrating that sometimes less is more - that the worst fear of man is not knowing.  And not only does Lovecraft refuse to give the reader everything, his narrator doesn't get everything - left with a madman ranting about things that are unknowable by the human mind.

No kidding its scary.  And no wonder its been copied again and again.  Its a singular vision that took a new way of writing that comes along once in a great while.  I tip my hat.

And I'll definitely check out some more Lovecraft.

I downloaded the complete works of Lovecraft on the Kindle for $.99 and read it all (except for some of his dreamworld stuff, which is brutal). My biggest issue with him is the time he spends "world building." At the Mountains of Madness is and amazing and tense tale until the narrator starts investigating. I love everything up to that point, then it takes a while for it to build up again, which can be fine, but I wasn't interested in the observations.

On another note, if you read more Lovecraft, you will find he has many go-to words in his back pocket, though I can't remember any off-hand. You could probably devise a drinking game, though.

You know, I was having this conversation with a friend who just picked up Lovecraft and found it intolerable, just unreadable, and couldn't understand the hype.

What I managed to get across is that the appeal of Lovecraft, to some of us, is that he writes with a very classical style, clearly indebted to Poe, but has a very modern vision of existential horror. The monsters in Lovecraft are so massive that we are beneath their notice, and their existence will drive us totally insane. It's no wonder his amazingly developed mythos is referenced in metal so consistently.

That said, I'm currently reading a collection of Cthulu tales with only 2 by Lovecraft, and yeah, some of the other writers are refreshing. Robert E Howard has a great little pulpy story in there, and he's just a smoother read...

I'm a big fan of Lovecraft and his contemporaries Robert E. Howard and Clark Ashton Smith. I would suggest "Rats in the Walls." It's short and has the typical Lovecraft plot wherein the protagonist, who stands for modernity and reason, looks directly into the face of chaos and ancient evil, and promptly loses his mind. I would also recommend reading a Robert E. Howard Cthulhu story. His follow the same basic structure as Lovecraft, except the protagonist, instead of going insane, looks in the face of evil and chaos, and punches it in the nose.

There's a collection of short stories called "Shadows of Baker Street," which tries to combine Sherlock Holmes and Lovecraft. The stories are little more than fan fiction, because they don't get Sherlock Holmes or Lovecraft, except for one: "A Study in Emerald" by Neil Gaiman, which is brilliant. If you can't find it online, get a copy of his short story collection, "Fragile Things."

Huh. I've never read any Lovecraft, but I suppose I should read at least one of his books...
So is this the one to read?

The security guard in my building is a huge Lovecraft fan, so I actually read this on Shay's rec as much as anything. I have been told "Call of Chtulu" is good stuff enough times that I'm looking into that. I also have a collection of Lovecraft I'm going to sample this winter and get into other short stories, where I think his talent may really soar.

I did enjoy the book, but the structure is going to take some getting used to. Now I know, and knowing is half the battle.

And I can take purple prose. I grew up on Chris Claremont's X-Men.

JS, you should definitely read Call of Cthulu, since it's short and you will know immediately whether you should read more.

Also, there was a silent film of it done recently, but in the style of films of the 30s, as though it was done at the time of publication. It's really fun!

I was googling for images of "At The Mountains of Madness" and I stumbled upon this Tintin cover and being a huge Tintin fan I was rather shocked that there might have been a Tintin-Lovecraft mashup that I have missed out on :D