Octoberama! War of the Worlds on the Radio!

On October 30th, 1938, the Mercury Theater performed a radio show adaptation of HG Wells' War of the Worlds.  I expect that most of you will have heard of this presentation.

On the eve of Halloween, 1938 - war brimming over in Europe, Asia in chaos, science and engineering on the march despite a decade of financial instability - Americans tuned into the radio for their after dinner relaxation.  Sure, everyone knew Halloween was coming, but like the first April Fool's joke sprung on you each year, it may not be the first thing on your mind.

The broadcast was the one that supposedly set the nation into a panic and had people driving around, shooting at water towers and running from imaginary space men.  It also ended in folks calling for the head of Orson Welles - well before he decided not to sell any wine before its time or voice the monster planet in the Transformers Movie.


About four years ago, Radiolab (a terrific NPR program) looked into the stories around the War of the Worlds broadcast, and as anyone whoever took Mass Communications 101 can tell you, the story was somewhat true, but nowhere as dramatic as anyone was making it out to be.  It's gone from a media studies cautionary tale on the power of mass media to a cautionary tale about not believing everything you read when there's a compelling story that's better than fact.

Yes, some people freaked out and left their homes.  Probably someone really did shoot at a water tower somewhere believing it was a tri-pod on its way into town (they didn't seem to hit it, if it was true).  But it wasn't really the panic that you hear about or we believe occurred at the time.

I tend to believe that we've always had fairly smart people and a whole lot of not-so-smart people, and people who just panic, no matter how smart.  But we also tend to believe what we hear even if it makes no sense.  Provide your own example, because they are legion.

We are NOT a more sophisticated audience than we were in 1938, and we're perhaps even less so if the proliferation of shows about Real Housewives is any indication.

However, what Radiolab did report, that I'd never heard before, is that in 1949 in Ecuador - the @#$% really did hit the fan.  People really believed there was an invasion, and they freaked the hell out.  The military was called into Quito, and it ended with the firebombing of the studio and people dying.  The story is truly horrifying.

In middle school I'd heard about the American 1938 broadcast, and I found a set of cassettes at Bookstop, a now-defunct book store here in Austin.

It's hard to describe how, even with the gulf of decades, even after you hear the intro to the show, and the first paragraph from the novel read aloud, how everything afterward starts to feel maybe a bit eerie...   As things starting going very wrong, very fast, the dread of an unknown, unstoppable force reported in small bits takes on substance.  If listeners tuned in late, and they did (after Edgar Bergen, supposedly), its not hard to see how the home audience might have started looking for their hunting rifles.  Listening to the broadcast is like listening to the world crumble, bit by bit.

Maybe the time line presented by the show is too fast to be believed, maybe it all seems impossible, or you - as a listener - might know that if anything was really happening you could look out a window and see there were no tripods, no black gas pouring down the street, and no battle going on over the horizon. Or change the channel and hear Charlie McCarthy wisecracking on the next station up the dial.

But even separated by 50 years at the time, 13 year old me still got the chills.  I used to listen to the tapes over and over and I still know at least the opening fairly well.

Below is the audio recording of the radio broadcast.  It's an hour long.  If you have an opportunity, I welcome you to turn the lights down and carve a pumpkin while you give the show a listen.

I asked my grandparents if they recalled the incident.  My grandmother (The Admiral's mother) was from New Jersey and a young woman living at home when the radio broadcast occurred.  She'd not been listening to the radio and didn't know anything about the broadcast until the next day, Halloween, when the paper hit the front step.

All she could remember was a neighbor going door-to-door on Halloween night in a get up with antennae and a sign reading "I'm a Martian.  RUN."

We know now that in the early years of the twentieth century this world was being watched closely by intelligences greater than man's and yet as mortal as his own. We know now that as human beings busied themselves about their various concerns they were scrutinized and studied, perhaps almost as narrowly as a man with a microscope might scrutinize the transient creatures that swarm and multiply in a drop of water. With infinite complacence people went to and fro over the earth about their little affairs, serene in the assurance of their dominion over this small spinning fragment of solar driftwood which by chance or design man has inherited out of the dark mystery of Time and Space. Yet across an immense ethereal gulf, minds that to our minds as ours are to the beasts in the jungle, intellects vast, cool and unsympathetic, regarded this earth with envious eyes and slowly and surely drew their plans against us. In the thirty-ninth year of the twentieth century came the great disillusionment.

It was near the end of October. Business was better. The war scare was over. More men were back at work. Sales were picking up. On this particular evening, October 30, the Crosley service estimated that thirty-two million people were listening in on radios.

SUPERMAN AND WAR OF THE WORLDS

Here's what's great about (a) being a Superman fan and (b) the internet.

Fellow Super-fan, Stuart of Kansas, sent a message to my Twitter about Superman #62.

Somehow, I'd never heard that Superman and Orson Welles once saved us from a Martian Invasion.

Stuart, you are awesome!  Here's a link to read all about it. 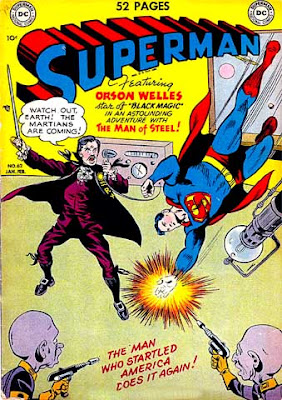 and much, much later

Here are some of my prior mentions of War of the Worlds: