Signal Watches: For Your Height Only

How do you make a Bond-knock-off better?  You cast a homunculus of an action star who the audience will adore.  I am, of course, speaking of Tom Cruise in all four Mission Impossible movies, but that's not what we watched this weekend.

Saturday night Doug was here, and that meant he came with media fit to seer the brain.  In our case, it was the 1981 spy thriller For Your Height Only, starring internationally renowned superstar, Weng Weng. 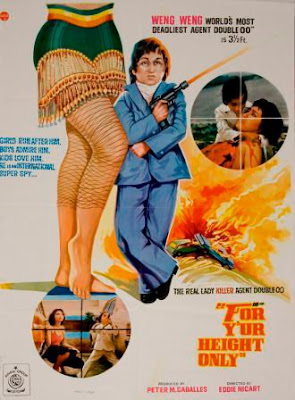 For years The Alamo Drafthouse has shown clips of this film as part of their pre-show, enough so that I knew exactly what this movie was when it started.  And, frankly, if they don't show some of this before SkyFall, I'll be shocked.

I've now watched this movie, and I could not tell you what it was about.  Golden banana thieves?  Evil bakers?  Kidnappers?

Everything about this movie holds together a bit like when you're in college and you watch a movie while drinking and try to remember the plot later.  I was stone cold sober, and yet trying to hold the movie in my mind is like waking from a sweaty fever dream wrapped in pool of prescription medicated hallucinations.

I do know the characters were snappy dressers.

It's a curious artifact not the least because it was filmed in The Philippines during the era when Ferdinand and Imelda Marcos were using the country as their personal piggy bank.  Doug tells me Weng Weng once performed a duet with Imelda Marcos, and I like to think that's true.

So, I'd like to explain the movie or talk about it, but, again, I don't know why Weng Weng did anything he did.  He DID have some amazing gadgets (including a remote controlled, flying, deadly hat).  Of course, yes, its intended to be a comedy, but apparently that meant that a plot of any sort was secondary so long as the action sequences kept happening - again, just like the Mission Impossible films. 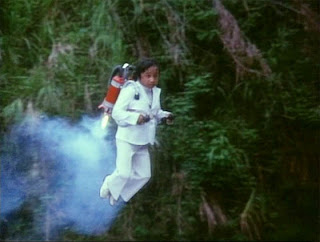 It does look like everyone working on the movie was having an excellent time - the shooting script of which seems entirely cobbled together from notes written on cocktail napkins.  Maybe that's exactly right for this movie.

Anyway, I tip my non-deadly hat at Weng Weng (who kills just an astronomical number of people in the movie, often with absolutely no motivation).