I kind of suspect this was a "you sort of had to be there" thing in 1986.  I think I was a full 45 minutes into the movie before I figured out it was supposed to be funny. 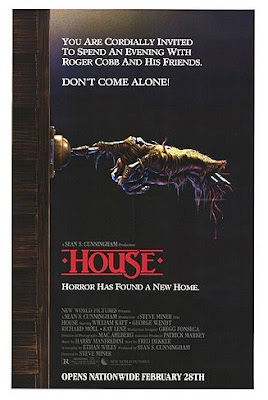 Sorry to those of you who have a fondness for this movie.  I think my comedy/ horror allotment was already filled first, in 1987, by Monster Squad, and then in 1993 when I saw Evil Dead II and Army of Darkness.

There is a certain amount of 1980's-ness to the movie in the "everyman takes on challenges" aspect to the movie, but I wonder if Tom Hanks' The 'Burbs didn't get into suburban guys in over their heads a bit better.

To put it bluntly, the effects of the film didn't age well, but didn't start off embracing their awfulness and working with it in the Evil Dead manner.  One of my many notes would be "you can light this thing a little less.  It's not a TV news set.  It's a horror film, sort of."

Now, as a kid I probably would have liked that this wasn't a standard horror film that's about people getting killed off one-by-one for their stupid, stupid decisions.  William Katt behaves like the Greatest American Hero he is, arming himself with handy weaponry to shoot and stab monsters that appear like melted muppets every once in a while.  The plot is fairly concrete and doesn't adhere to the twist ending/ really, everyone suffers rule of most horror flicks.

In a way, its a movie that doesn't seem to know what it is or what it wants to be.  Comedy?  Horror?  Action Film?  The hints at a dark otherside to the house seem oddly wasted, let alone the Dali-esque paintings created by the Aunt who opens the movie with her suicide.  The set-up just doesn't feel like it has much of a pay-off when it boils down to a fist-fight between William Katt and Bull from Night Court in a crappy mask.

I have a suspicion.  I suspect that there was once a pretty decent script that got this movie started, and then the director had ideas, and the producers had ideas, and this was the movie that resulted.  You can almost hear the producers insisting on the scene where the neighbor gets out of the pool, because, dammit, we've got to have some T&A.  I wonder if this wasn't originally a dark, dark script about a Vietnam Vet who can't tell the different between the ghosts in his head and the ones in his house as he tries to write a book in the home where his aunt killed herself - but then someone decided that was too dark and wouldn't draw in a large enough crowd, so they chose to make it wacky.  Somewhat abruptly.

There's also this thing I'll point out that, throughout the film, William Katt's hair changes, often from shot to shot.  It's darker and shorter in some scenes and a magnificent golden mullet in other scenes.  In fact, at times the darker hair looks like a wig.  So I kind of wonder - am I seeing things or did something happen here?

I recall one or more of you suggested this movie, and I'm going to just stop here, because clearly you're seeing something in the film that I am not, so I open the floor for any one of you to provide a defense for this thing.