At the conclusion of the Parker novel The Handle, Parker and Alan Grofield have landed in Mexico City with Grofield licking his wounds and Parker leaving him there so he can get on with it.

Richard Stark (aka: Donald Westlake) spun off Grofield into his own sub-set from the Parker novels with The Damsel (1967), giving Parker's occasional co-worker with the head full of flights of fancy room to pursue his own adventures. 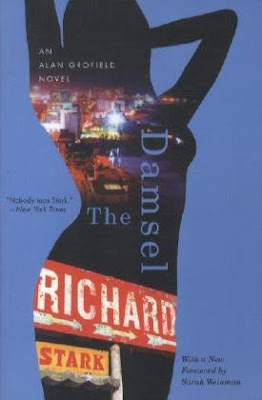 Structurally, it feels a bit like a Parker novel, but tonally, The Damsel is a lot lighter on its feet and a bit wackier in scope.  While Stark narrates both books from a third-person perspective, the attitude of the protagonists infiltrates the worldview of the book.  Parker's methodical, systematic, almost obsessive-compulsive perspective is ditched for Grofield's devil-may-care approach, and talent for improvisation and theatricality giving the adventure more of... an adventurous air.


The book opens with a woman climbing through Grofield's fifth story window, which he decides is a bit of good fortune.  It's hard not to imagine Parker tying the woman up and making her answer some questions, but Grofield, wounded as he is, is still more interested in the possibility presented by a seemingly available girl appearing in his room unexpected.

From there a plot spins out of mean-eyed hoods, escape across mid-Century Mexico, and a twist into international man-handling of banana republics.  You never really feel like your leads are in all that much danger, but Stark's ability to think through a situation and get his characters through seeming traps is as remarkable here as it was in the first Parker novels I picked up.  Grofield may be a bit of a rake, but he's also smart when he has to be.

In a lot of ways, the book is an exercise in questions of morality and power at a higher level applied with school-kid perspective sentimentality.  Stark always firmly understands the motivations of his characters, and its those motivations that sit together like billiard balls until the catalyzing event strikes them like a cue ball at 100 miles per hour, sending everyone ricocheting around the frame of the story.

Of course, all Grofield wants, like Parker in so many of his stories, is that money and a way out of here with his neck intact.

I will say, I didn't pay much attention to the cover, but I guess even a silhouette of a good figure on a book jacket was enough to draw a lot of looks when I was reading the novel sitting at the airport.  No idea what people thought I was reading, but I got a lot of sideways glances.
Posted by The League at 11/06/2012 08:26:00 PM