It's in an industrial/ shipping area near train tracks and doesn't look a bit like a retail outlet from the outside.  Inside, it's several thousand square feet of comics and comics paraphernalia.  They most certainly have new stuff, but they also curate a pretty great amount of golden and silver age books.  I was in the store all of thirty seconds when I looked up and saw Fantastic Four #1, which sort of boggled my mind.

All along the store are classic and vintage comics of varying pedigrees.  I can appreciate a Tom Mix comic existing, but I'm not going to be looking to add it to my collection.  But point me at the Jimmy Olsen comics and...

Below the classic comics are toys, statues, etc...  it's really pretty impressive.  I am very much regretting not grabbing an item that was on the shelf that I saw and I know I won't find anywhere else at that price.  They do carry lots and lots of back-issues, including an area that's similar to Austin Books' Sidekick Store of unbagged and unboarded back issues for $1.  And back issues that are better managed, as well as a sort of "showcase" back issue area where I found a couple of items.

It was a fun trip, but I'm on a budget (which I successfully set myself up to blow this month, and its the 3rd).

I walked out the door with two fairly early Jimmy Olsen issues and an issue of Star Spangled War Stories I've not been able to find in a condition I was willing to pay for.

Seeing the comics there did remind me of where I'm at in my comics hobby these days.  I'm less about "what's new that's in" and more about building the Jimmy Olsen, Superman and Enemy Ace collections, and so... 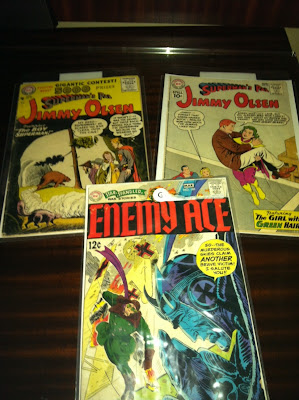 Yup, that's Jimmy Olsen #14 from about 1956, Jimmy Olsen #51 from the 1960ish era of sheer madness in Olsen books, and Star Spangled War Stories #143, the cover of which pretty much sums up a whole lot of the undercurrent of Enemy Ace comics.

I've now checked off several bucket-list comic shops, from Forbidden Planet in London to Mile High to Comic Relief in Berkeley.  I still have to see Heroes Aren't Hard to Find and Mid-Town in Manhattan.

It's hard to say what the future of back-issue collecting will look like as the kids who grew up reading their comics in scans from Pirate's Bay don't particularly value paying for anything to begin with, let alone building archives of media materials.  Who knows what the future will hold for a business that so clearly built itself around the sustainability of the back-issue market?   But while that market holds on, its an amazing, must-see experience.

The cab did come get me an hour and half later, as we'd agreed  I returned to the hotel, and UT actually won their game against Texas Tech.  A few of you will realize this seemed about as likely as waking up tomorrow and the sun had forgotten to rise.

I've been to the Mile High Comics in Anaheim and it was pretty huge. Nothing close here in the Northwest.

Wow, that's would be like travelling to Mecca for 12 year old me. I remember reading the Mile High Comics ads in 80's comic books. I did place an order with them once to get some Uncanny X-Men issues that I had missed but I only every placed one order. The cost of shipping the books to Canada were too expensive.

Looks like a real impressive store and I'm glad you were able to grab some books that belong in your collection.

I too have been to Forbidden Planet in London. I remember having to explain that Visa charge to my wife when I returned from the trip. She initially didn't think it was a comic book store.

Ha! I recall the X-Men had a fight in front of Forbidden Planet back in the Claremont heyday, and I somehow vaguely knew it was a real shop and it freaked me out (and felt like no small amount of pandering from anglophile Claremont). - I also freaked out when I figured out the reporter character in X-Men, Neal Conan, is a real reporter for NPR.

I liked both shops a lot, but I'll be honest, Austin Books is still terribly competitive with them both. Maybe ABC doesn't have all the Roy Rogers and Snagglepuss back issues, but its still impressive.

Yes Austin Books sounds amazing. I really need to get down there someday, if I only I could weasel the free trip out of my manager.