So, life is funny how it surprised you sometimes.

Not that long ago I was sitting in my office at work making digital libraries happen when a guy from my building who I talk to now and again, mostly "howdy" and "hello" as we pass, asked me about some posters from Mondo I have hanging up in my office.

"You like sci-fi?"
"Yeah!  It's kind of my thing.  Not so much the modern stuff, but I kind of dig mid-century stuff and maybe up to the 80's the best."
"Cool!"
And we parted ways.
A few days later Bill appeared in my doorway with a DVD in his hand.
"A while back, my son and I made this movie."
My stomach dropped.  I like a good Birdemic trainwreck, but I like it from a casual distance.  I do not like to have to nod and smile and say "that was super!" when it was not super at all.  Then I looked down at the cover. 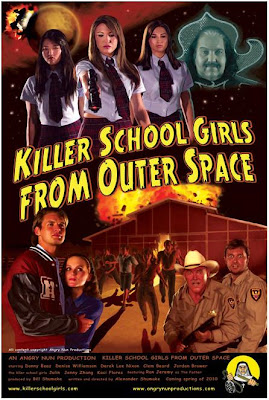 But I didn't get a chance to watch the movie until Tuesday night.

Turns out Bill is the producer on the movie and his son Alexander directed.  I don't know how they did it, so I need to sit down with Bill and ask, but there it is.  Pretty amazing what you can do on a budget these days. and shot here in Central Texas as near as I could tell.

As Jason would no doubt ask:  is it entertaining?

I answer with a resounding "Oh, most definitely."

In the classic Z-movie tradition of Roger Corman, Killer School Girls from Outer Space (2011) is pure awesome entertainment from the first scene and its flying saucer to the climactic conclusion, and all the homage-to-an-homage-to-an-homage camp and craziness in between.

Apparently Ron Jeremy has deployed his three "daughters" in mid-riff bearing school girl outfits to go out and clear planets out of the way for his plans to take control of the universe.  Jeremy is wearing, of course, a huge Ming-the-Merciless style collar.  The School Girls land in rural central Texas where quarterback, Ben, is considering quitting the team, a move nobody in town thinks is a good idea.  He's got a great arm, it seems.  He and his ladylove, Allison, see the UFO landing but believe its a meteor and go to check it out.

There they come across the Killer School Girls and try to report the incident to the doubting Sheriff and his Deputy.

Let me stop and say, Clem Beard who played the Sheriff?  Nailed it.  He is absolutely terrific in every single scene.

Anyway, there's a lot of "we don't believe you crazy teenagers", and rival thug teenagers, convenient caches of weapons and a whole lot of goofiness.  I was, personally, a fan of our hero running through the cedar trees pursued by a frustrated Killer School Girl #2.

The cast is pretty great, all sports in that "we are knowingly in a ridiculous movie" fashion, but without getting all winky about it, which was sort of the downfall of Lost Skeleton of Cadavera, and maybe why that one didn't resonate so well.  Somehow the players keep it straight, and even when it isn't working 100%, it works in the context of the movie.  And tip of the hat to lovely actress Denise Williamson, who has one of the rougher entrances you're going to see in a movie.  She and Danny Boaz do a great job as the 2011-era Aneta Corsaut and Steve McQueen.

The disc came loaded with extras I haven't yet watched, and there's a whole second disc I haven't cracked yet on how they made the movie.  Crazy.

Speaking of, the FX are suitably cheesy, but it's pretty neat to see how much they were able to accomplish and how James Nguyen may have misunderstood what he was getting on a budget.  These look fakey, but GOOD fakey.  Director Alexander Shumake clearly knew what he was going for.

This is just one of those movies that you're either going to get into and find it's charm and appeal or you're going to wonder what the hell is going on and why this was made.  But I, personally, am a big, big fan and hope we see more from Angry Nun Productions.
Posted by The League at 11/28/2012 01:25:00 PM

I'm intrigued. Is it available via the Netflix?

doesn't look like it, but I'll loan you my copy.

If, perhaps, The Dug were to get a copy of this the next time he's in Austin, I'm sure Team Swizzlebeef would find this...intriguing.

Where can I fine a copy of this to watch? Does not seem to be available anywhere.

Hoo boy. These days, I have no idea. I've lost touch with the guy who made it, and I haven't looked for it in years (and I believe my copy disappeared into a Half-Price purge).