Well, so that was the long weekend for Thanksgiving.

The Thanksgiving Holiday is over, and we head into the Christmas season.

Before we bid adios to Turkey Day, here's some quick views...


I don't have any good pictures of anyone else, so you'll have to give me a break.

Here's a bad picture of me and Jamie on my folks' back porch.  They back up to a bird sanctuary in North Austin, thus: all the trees. 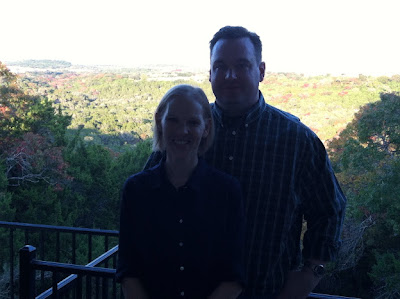 That was actually kind of the end of the fun and games.  After dinner we went home and watched UT just totally flame out versus TCU and end any chance of decent bowl placement.  Then I made Juan watch 2 hours of Punkin' Chunkin'.

Starting Friday I began cleaning the house and getting the decorations, outside and in, up for Christmas.  We're having a holiday party next weekend (sure!  come on over), and I wanted to be ready.  It's also one of the two times per year we do a thorough cleaning of the house, top to bottom, and I spent several hours dusting and cleaning my increasingly regrettable collection of DC statues (those things take forever to really clean).  I did go out and buy some jeans, and hit Target to see if it was crazy (it was not), but it wasn't really "Black Friday" shopping.  There were no big deals on kitty litter.

Saturday, The Admiral came over and we hung lights outside, and then I cleaned up inside and put up the tree (but I got two ornaments on it before I quit).  Today was indoor decorating and more cleaning.

Jamie's picked up the cold I'd had for several days, so I feel pretty bad that I handed it over to her.  Hopefully she'll bounce back in the next day or two.

So, yeah, not a lot to report.  I didn't go see any movies, and I only watched one at home that I'll post on later.

Here's our tree, by the way.  All fake and only four feet tall, so it stands on a table.  This year its in a corner of our television room instead of in the front of the house where we've kept it in years past. 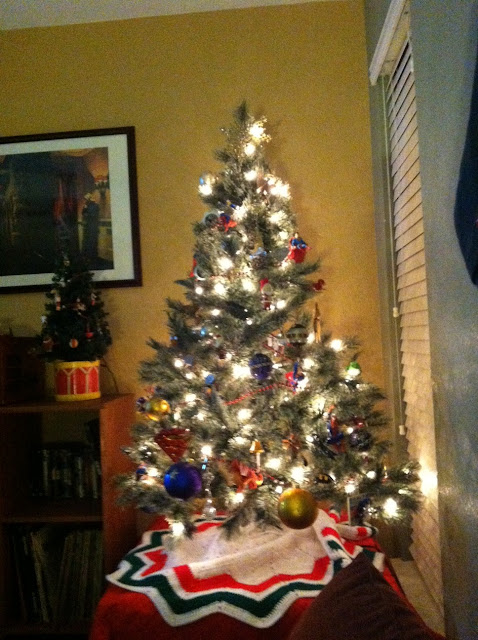