The story on this movie is that it's a low-budget affair and a passion project that's made it's way to In-Demand on cable before theaters or BluRay.  The movie sports some pretty big names from Danny DeVito to Robert Forster to Carla Gugino and the perhaps too always-game Rosario Dawson.

The film is a tribute to various offshoots of the noir genre, recognizing the occasionally laconic pacing and low-rent nature of many of the stories in these films, of low-level cops and grifters making bad decisions for sex and money or some combination of the pair. 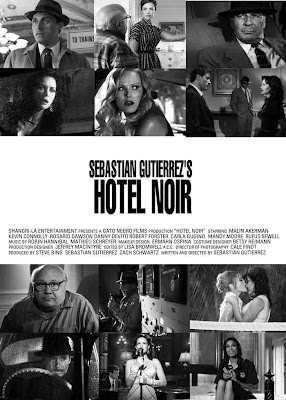 I'd heard the film was made on $300,000, which seemed impressive.  And it is.  That's a pretty tight budget.  But for any film, I expect to have balanced sound, decent lighting and someone in wardrobe that has a pretty good idea of what 1958 actually looked like rather than the odd 1940's - early 1950's pastiche that they seem to be going for (and for goodness sake, get gowns that properly fit your attractive lady stars.  You don't need Edith Head on staff to know when a dress isn't working quite right*).

A period movie needs to stick to its guns and work hard to get as much in the way of detail correct as possible, and if the writer/ director wants to put his name all over the movie poster, he might want to try making sure he's got the basics down.  Like:  what did women and men's hair look like in 1958?  Or any year that was not 2011-2012?  Why did Danny DeVito look like a time-lost dad from 2011?  What was up with the superhero gig which was not only considered kiddie faire, but tainted kiddie faire in the mid-50's?

Aside from the issues with the sound (which simply should not happen), those are quibbling details, but they add up, shot by shot.  If you can't pull off the period piece convincingly, there's no compelling reason to make it a period piece.

The movie has the issue so many movies with a Russian nesting-doll structure seem to have that are not Pulp Fiction, it wants us to care about each of these stories, but the audience is in and out so quickly and the stories are told in such broad strokes that it's difficult to say if it's a story or a pastiche to other, better stories from other films.  Why promise a multi-course gourmet meal and then deliver a sampler tray from Chili's?  In a way, it reminded me of a less-competent Four Rooms, and I'm not sure that's particularly high praise for either movie.

The stories that do appear are pulpy at their roots, short stories from Spicy Detective more than a James M. Cain or Raymond Chandler novel.  DeVito's character's story, in particular, zigs and zags, defying the ability to have a point.  It's difficult to discuss as a whole narrative because the movie wants to flow between the stories, but there's not much there, and even star Rufus Sewell seems checked out, perhaps playing melancholy to the point where he's no longer present enough to make his scenes engaging.

It's not an abysmal movie, but ultimately it commits the sin of being half-baked.  There was an idea here that might have worked, but the director needed to get past the idea of how cool hats are on the right men and gowns and rouge can make a woman look, and understand that going monochrome is not a license to ignore everything else.  And while I appreciate they didn't go for a "every shot with lights through the shutters" look, the crafting of shots either looks like they're just throwing light everywhere and hoping for the best when the color gets removed, or they found this one cool set and they want to make sure they show it off instead of having the characters just exist in the space (and I'm pretty sure I recognized one space used from The Black Dahlia).  The crafting and shaping of what's in the frame looks like the work of a TV cameraman, not the people who carved pictures out of light and texture in the films they're trying to emulate.

I guess I wanted to enjoy this movie, and got bored a third of the way in and it never won me back.  Tough, considering I'd assume I'm the target audience for this sort of thing.