1.  Everyone is familiar with Claude Rains from some of his bigger pictures like Casablanca, but he was truly the Michael Caine/ Gene Hackman of his time.  He was a terrifically talented performer who fit neatly into film after film, and despite the fact he is obviously and indelibly Claude Rains, he just works in every role, no matter how good or bad the film.

2.  A special thanks to Jenifer out in San Fran for making sure I paid attention to Audrey Totter.  I still haven't seen that many of Totter's film, but she's a terrific talent. 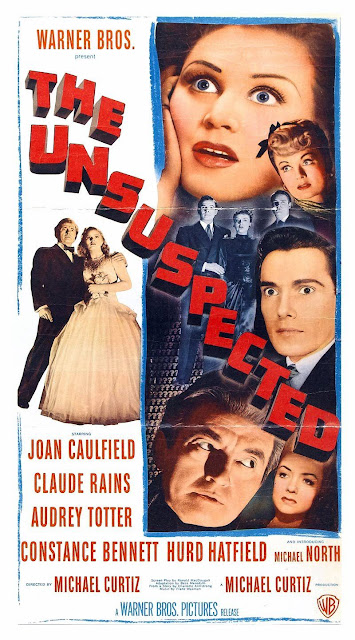 The Unsuspected (1947) played a few nights ago on TCM and I managed to record it.  It's an interesting film, and I don't think host Robert Osbourne was wrong to make comparisons to Laura prior to the film starting.  It may borrow an idea or three from the film, but director Michael Curtiz (of Mildred Pierce, Casablanca and many, many other films) instills the film with his own vision and more than enough suspects and twists to keep you going for the duration.  It may not be one of his better known efforts, but it is extremely well directed, even as it hinges on "new technology" to tell its stories - something that often doesn't age well with movies.

Perhaps like Laura or The Strange Love of Martha Ivers, it's a domestic  noir, dealing with the upper class and murder over cocktails and in gorgeous gowns (I mean, seriously, that black dress Totter wears...). It seems that a secretary is murdered and its made to look like a suicide within weeks of a young heiress dying on a boat at sea.  The family around the heiress all seem suspect around the death of the secretary, and the introduction of a handsome young man claiming to be the husband of the heiress throws a wrinkle into the mix.

All in all, it's a pretty good small film with some whip smart dialog, great performances by Totter, Raines and Constance Bennett.  Worth a watch some time.