I didn't intentionally miss Brave (2012) when it came out in theaters, and I certainly haven't been avoiding it.  But Disney/ Pixar doesn't just dump their animated films out there in the usual release windows, instead controlling them pretty carefully and maximizing profits, etc... none of which I hold against them.  They know what they're doing.  This I learned in 3 summers working a cash register at The Disney Store. 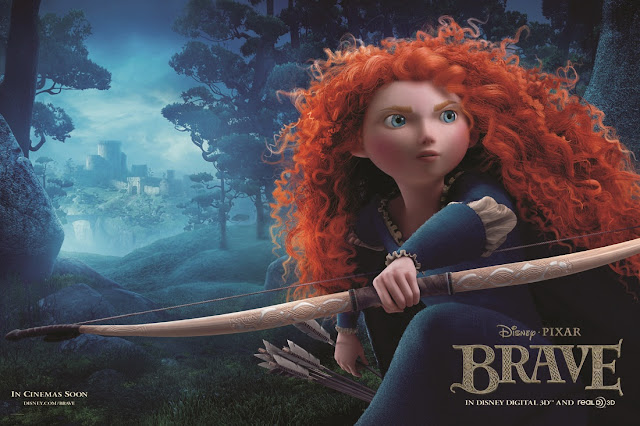 I was aware of how far Disney and Pixar have taken animation, and while I wish they'd delve into stylized pictures a bit more (Big Hero 6 is probably the closest to what I'm talking about in recent memory),* it is pretty amazing what they can do with blending the natural and real with the imaginary.  You have to be kind of crazy not to appreciate everything about the character animation in Brave, blending Disney cartoonism with the absolutely believable wild strays of Merida's red curls.

Further, a couple of years ago I was at Disneyland with The Dug, my brother-in-law, and we spotted Merida crossing the park, and he said "let me send you a video tonight" and, as it turned out, the actress had perfected Merida's determined walk, something that was very non-Disney Princess-ish in its galumphing purposefulness.  It's that kind of attention to character, rotoscoped or otherwise, that tells who the character is, that even the other big gun American animation studios could stand to pay more attention to.

Pixar has absolutely lit a fire under Disney Animation proper, and the self-awareness and deconstruction of traditional Princess ideals in Brave (Pixar) and Frozen (Disney proper) should hopefully resonate a bit more than Aurora passing out for a good chunk of Sleeping Beauty and Cinderella sitting around thinking positive thoughts and, if not for deus ex machina and a rich guy, she'd be stuck in a life of domestic servitude.  Brave is a really solid first stab at dismissing the Disney Princess demure non-player-in-her-own-story problem Disney has had since Snow White stumbled her way into a house full of short miners, and may be a bit on the nose in making sure we know this is not a cute princess movie.

The plot:  Merida is the eldest child and only daughter of the King of Scotland.  She's a bit of a free spirit/ tomboy who isn't interested in the princess etiquette lessons her kindly but focused mother is always pushing on her.  She'd rather be on a horse, shooting arrows, running around in the woods and whatnot.  Then, one day, her mother tells her she's going to meet her suitors, the eldest sons of the three other Clans.  She's horrified, they squabble as mothers and daughters do, but the suitors arrive.  Merida shows them all up in an archery contest, and her mother gets really steamed.  Merida runs into the woods, meets a witch who brews her up a potion that will change her mother so she'll come to understand Merida.  Merida applies the potion, (MAJOR SPOILER) her mother is turned into a bear, hi-jinks and understanding ensue (END SPOILERS).

Frankly, there's so much of the standard-issue "parents and teenage daughters squabbling", I kind of wondered how this movie went over with a broader audience.  It would be the first exposure of the idea to a younger audience who would - at best - get that they don't always want to do what their parents want them to do, but maybe not get that great-teen-rebellion bit quite yet.  And, frankly, I had no idea that "moms and daughters learning to appreciate one another" was what the movie was about from the advertising.  I thought it was about the daughter of a king who has to go into the woods to fight a big, scary bear all on her own, the kingdom is at stake, etc...  But, nope.  It's a movie about mothers and daughters and failure to communicate or see eye to eye.  Like, One Day at a Time.

Here's the part where I make everyone uncomfortable, but:
I know it wasn't really in the text, but there's kind of a weird vibe to the whole "arranged marriage" bit that - as a grown-assed adult watching the movie - frankly blew my mind.  Look, there's an unavoidable undercurrent of Merida's mom and dad handing her off to perform "marital duties" and produce an heir that'll help seal up the alliances that comprise the kingdom.  Merida is going from girlhood into womanhood overnight, which, I am guessing, historically, isn't all that far off.  Of course it's a cute kids' cartoon, so we can say babies come from storks, but...  yeah.  It's hard not to consider as Merida is losing her mind about the prospect of arranged marriage and how much she is absolutely not ready.

This movie just has very strange pacing.  It feels like the first act takes forever to unfold, and isn't particularly fun as it rolls out.  I don't mind the Mary Sue-ism of Merida - it's fine.  And I don't mind that literally every male in the cartoon is drawn as a grotesque - it reflects Merida's stance on the topic of marriage and boys still being alien and/ or icky.

But, man, the witch doesn't even show up til way late in the game.  It feels like she should have been there at least 10-15 minutes before that.  The problem is, (SPOILERS) mom can't talk for a good chunk of the film, and it kind of limits what they can do with her as she connects with Merida (END SPOILERS).  It also feels like it has about three endings.

I have seen far, far worse cartoons.  This one strives to be genuine and heartfelt, maybe tapping into family dynamics in a way that Pixar and Disney hadn't really tried to do much yet.  It's not a trope yet, it's not all figured out with the rough edges worn away through repetition and drilling itself into the zeitgeist.  Frozen nailed the inverted fairlytale expectations well enough that they basically upset the Princess-needs-a-Prince-to-Kiss-Her paradigm in movies for the next generation.  As many stumbling points as I felt the movie had along the way, it still sticks the landing with a great ending that pays off what came before.


*I love 3D, but, man, I also miss the solid design work in backgrounds and scenery that changed with the movie, not just in landscapes, but in character.  Bambi is not 101 Dalmatians is not Dumbo is not Three Caballeros.  Everything kind of feels like 3D Beauty and the Beast or Little Mermaid.  Give me some impressionism!  Give me some modern art!  Change it up!  Don't just make scenery that looks like actual scenery.  This is a cartoon!
Posted by The League at 8/30/2015 11:37:00 PM