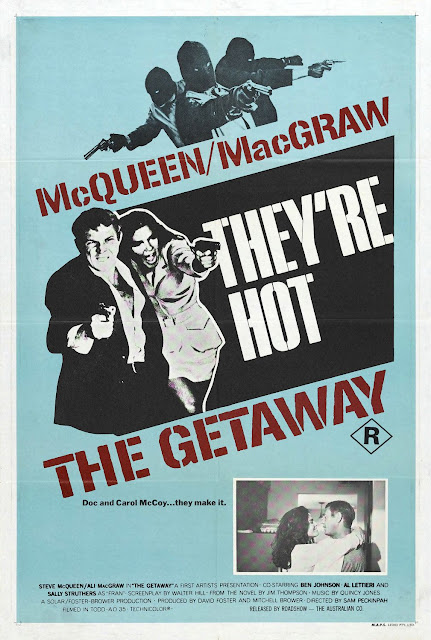 I haven't seen that much in the way of Sam Peckinpah.  It's not usually something I think Jamie will like, and as we watch movies together, I haven't seen The Wild Bunch since college.  And, prior to this evening, I'd never seen this movie, but I didn't know it was Peckinpah until the credits rolled.  I just didn't say anything to Jamie because, well, I really wanted to watch this movie.

I also haven't watched all that many Walter Hill movies, and only saw The Warriors sometime in the last 12-24 months.  And I loved it for what it was.

And, of Jim Thompson's work, I've also only read The Killer Inside Me.  And, at that, a long time ago, and I barely remember it.

Still, I'm familiar with all of their work by reputation.  You can't watch and read what I do and not have that stuff enter your sphere a little.

I wanted to watch this because it's one of the three or four "must watch" Steve McQueen movies, and I'd never gotten around to it, and, I'll be honest, I'm totally kicking myself for not having had watched this 20 years ago so I could have re-watched it a bunch by now.  It's a @#$%ing good movie.

Directed by Sam Peckinpah.  Written for the screen by Walter Hill, based on a novel by Jim Thompson.  Shot in Huntsville, San Marcos, San Antonio and other parts of Texas.  Starring Steve McQueen and with a small role by Slim Pickens.


The Getaway (1972) a crime movie from a particular time in Hollywood, and after Bonnie and Clyde, the rules had changed about what people could and couldn't do, even the bad guys.  And, make no mistake, this is not a movie with any good guys in sight.  The best we can do is offer you a pair of protagonists in Steve McQueen and Ali McGraw.

Anyway, a lot of the grit, the complicated and sordid relationships that had been in crime books since Dashiell Hammett set the Continental Op out on a case hadn't ever quite made it into the movies fully intact.     But here, we have a movie not just about a heist gone bad (they all go bad unless Brad Pitt and George Clooney are involved), but a married couple who need each other to escape, but their decisions and personalities have them at odds as pressure mounts.

Steve McQueen plays a heist man who is doing time in Huntsville (I live in Texas.  You really don't want to do time in Huntsville, in the prison or otherwise) who's wife (Ali McGraw) sweet talks a local powerful ne'er-do-well into getting McQueen parole.  Of course, there's a catch - McQueen has to pull a heist for the guy, and he has to work with his selection of mechanics.  They make off with the money, but it goes badly.  And when McQueen goes to drop off the money, he finds out exactly what his wife did to get him paroled.

Even in 2015, it's a little shocking.  In general, movies and TV still don't like to go there.  Infidelity is fine when we're talking minor characters or characters on a sudsy lawyer show, but even in crime dramas it causes so much character friction, in a lot of cases unfaithful wives end up dead so our anti-hero can find someone more faithful and wholesome.  And it's never entirely clear that McGraw's character wasn't planning to double-cross McQueen, so... you know... colorful stuff.

Throw in McQueen's temper and McGraw's inexperience and amateurish decision-making when it comes to this heist and escape stuff, and those stakes get raised.

Meanwhile, McQueen and McGraw have crooks on their tail, the cops looking for them, and no chance to settle it all.

The action in the movie is pretty incredible.  Of course, it's Peckinpah, so the final firefight is pretty nuts, but all along the way, there's a certain ruthlessness to the characters - all of the characters - that makes for a crime movie that matches the content of crime novels of the preceding decades in a way the movies were never quite willing to do til this point.

Anyway, it's free streaming on Amazon Prime right now, so there's an option.  I really dug it.