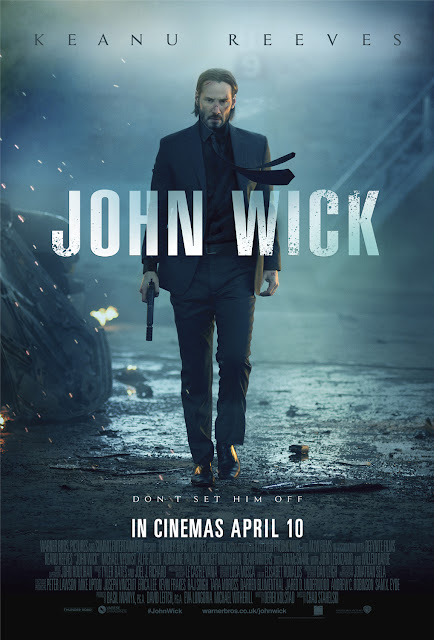 Of the criticisms I've picked up about the movie in the chatter online, the dog thing is something people get or they don't, and for those who don't, good news!  You're excused!  You are no longer expected to need to understand "motivation" or "glaringly obvious emotional nuance" either in stories or with actual people.*  By all means, go back to your Play Station and telling me how things really work.

From here, the story hinges on videogame logic, and, in fact, is probably was as well or better suited for a video game than a movie for grown-ups, which is a shame, because the movie actually does happen to have an absolutely tremendous first act.

Either because there was nowhere to go with the concept or because the studio did what studios always do - the movie fizzles out into a weird fantasy of violence that goes from "holy heck, this is exciting!" to "ho-boy.  Here we go."  And if you want to know exactly when to step out of the movie and try to pretend like the rest of it is going to be really good, just turn it off as soon as Wick goes to the hotel for super badguys.  That is your official cue that they were done trying.  I'm not kidding.

After reading up a bit on Payback, which we watched last week, and knowing what happened there and knowing that Hollywood gets totally freaked out by test audiences in Chandler, Arizona comprised of mall-shoppers who happen to have literally nothing else going on for the next four hours and can just walk into a random movie and then share their feelings - nothing would really surprise me.  So, we wind up another assembly-line Hitman-like flick appealing to males 15-25.

There are a lot of comparisons to the Payback problem.  At some point, Reeves' silent killer has to talk, has to make words so the audience can understand the plot and follow what he's doing.  And once he does that, he must also develop a sense of humor and charm.  Parker novels and Spaghetti Westerns taught us how to do that right.  Here - the movie is tripping all over itself to make John Wick likeable rather than compelling or consistent, and that's a bit of a shame.

To be honest, once you get over the disappointment, the movie is still pretty fun if you just give up on logic.  It's the kind of movie where a villain catches the ruthless killer anti-hero and instead of putting a bullet in his brain ties him to a chair so he can monologue (this was really the scene that screamed "studio rewrite" to me).  And, our murderous anti-hero is just killing everyone in a suit in his path, but when he finally sees his target, he has a moment of reflection rather than just putting a bullet in the guy.  It's a beat from another movie.  It makes no sense here.  Anymore than the "let's throw our guns down and fistfight the Big Boss" scene at the climax.  It dilutes character, narrative thread and makes it a movie you'll sorta remember rather than having a reason to return to the movie again and again.

But, yeah, it's stylish and moody.  It plays up the "you're coming back?" bit of someone with not just a career behind them, but then five years of separation.  Then casts people 10 years too young to be a part of that experience in the female roles.  (Special kudos to Adrianne Palicki for becoming the go-to action female of TV and movies.  We always believed in you.)   It has post John Woo operatic plotlines and violence, but doesn't know what they're for.

So, sorry, RHPT.  I am afraid this one didn't quite do much for me.

I will also say, I'm getting much better at recognizing what would have worked for me as a younger viewer and what I care about now.  Were I in high school, I am positive I would have loved this movie and forgiven it all its flaws and sins.  This movie easily would have been the movie I would have thrown into conversation in college and said "but did you see John Wick?  I mean, really see it?".  But... sadly, not so much now.

And in that way, yeah, it's not quite as exactly braindead as a lot of stuff barfed up by the action-factories.  But I've got my Commando.  I'm good with it.  This just isn't what does much for me anymore as I embrace old-manness.

*seriously, all I've seen about this movie has read something like "huh huh huh!  These guys kill his dog and so he goes and kicks ass!" or "it was dumb.  It was just his dog." followed by, in that writer's head, I assume, "I should order one of those pizzas from Pizza Hut with the cheese in the crust" and "I'm gonna buy some more Lotto Scratchers!  I feel like my ship is about to come in!"
Posted by The League at 8/30/2015 12:16:00 PM

Ah, I should have known better. Maybe you'll like Ex-Machina better.