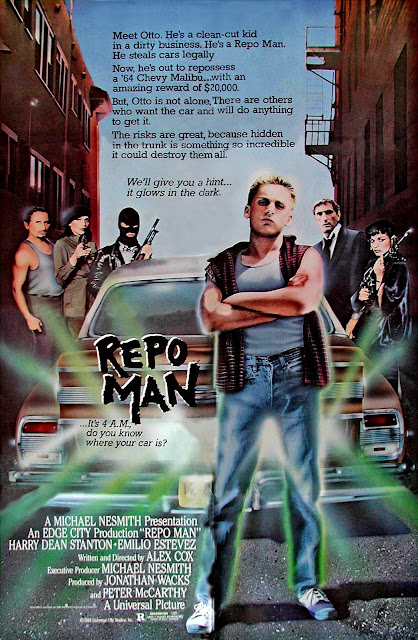 In a lot of ways, Repo Man may be the only surviving truly Gen X film,  with it's disappointment in the flower-children/ Me Generation who became the adults while their kids grew up in front of the TV.  It bears not just an anti-authoritarian but near a nihilistic, no-future approach to our protagonist's POV, the generation that figured out that hard work and a good attitude in a shitty job was just going to keep you doing that same shitty job, and keep you a country mile from the American Dream.  And - as much as anything - the film embraces the strangeness of the world as the only way to get by.

1984 may be a bit early for a truly Gen X movie, and it may be hard to say which was chicken and which the egg, so we won't push the point a whole lot further.

It's not a movie I've seen 200 times, but it is a movie that seems to get better every time I watch it.  There's a LOT going on in the film.  Critique of consumer culture, televangelism (once again in the news thanks to HBO's John Oliver), government mismanagement, conflicting political views, social observation, post-punk 80's college rock, aliens, Unifying Theories of Everything.  What's not to like?

The movie bombed out at the theaters, but I don't remember it ever getting a real release.  It just showed up on the shelf at the local Video Station, and at some point in high school we rented it, so that was somewhere around 6 or 7 years after the movie's initial release, and I have no recollection of why we rented it then.  Just walking around for a month afterward insisting "A repo man is ALWAYS intense."

It also features Emilio Estevez in a signature role, and one that's oddly charming for a character who is likely somewhere in the neighborhood of sociopath, but so much less so than everyone else in the movie, he's positively cuddly by comparison.  His mentor is played by Harry Dean Stanton in one of his best parts, a repo man with a code and a firm belief in a better America and life for himself.

Throw in a Chevy Malibu carrying alien corpses, a pair of Latino brothers who seem much better at this whole repo business that everyone else, a government cover-up, and learning the ropes on the mean streets of Edge City, and you've got a hell of a movie.

We've sort of made up the 1980's in the image of John Hughes movies and a Reagan's America that doesn't include the nuclear annihilation threat or the stagnant economy.

Who wants to remember any of that? Also, I would really love your opinion on Heathers. It's on Netflix.

I think Heathers will always be colored by the change that's occurred since Columbine, and you'd get slapped today for trying to say anything about it other than the required denunciation of violence. I don't really do requests, but I might get around to it some time. We'll see.

I'll let you off the hook and assume you're kidding with your question.