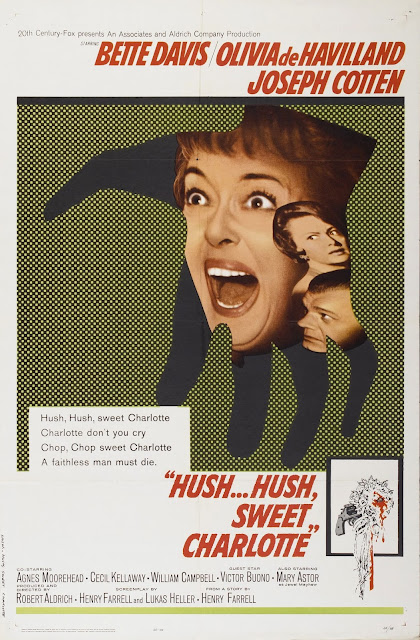 Crawford doesn't return for this movie, but it's worth considering the casting that occurred in both movies.  Director Robert Aldrich has a really weird filmography, and these two were really a blip for him, as he also did Kiss Me Deadly and The Dirty Dozen, movies that couldn't be more different from each other or from Hush... Hush, Sweet Charlotte.  He'd worked in film in low-run positions when Crawford and Davis were at their peak, and I imagine when he had the opportunity to cast women beyond the usual shelf-life of a starlet (and Davis and Crawford had done pretty well to find roles for women of appropriate age), he got to fulfill a dream, even if its putting these women in scary make-up and putting them through the wringer.

Olivia de Havilland steps in for Crawford here, pairing with Davis, and she's everything you want her to be in the film (de Havilland is still alive, which boggles the mind when you consider all the talent she worked with).  He pairing with Davis has a familial warmth that surely casting Crawford would have turned to ice, and it provides am interesting counterpoint to the balance in Baby Jane.

Most of the movie takes place in an old plantation house, and centers around Davis's character, Charlotte, who may or may not have killed her beau in 1927 (the modern era in 1964).  Her domineering father had found out about her plans to run off with the married Bruce Dern, and he intervenes, stopping the elopement.  Shortly after breaking of with the young Charlotte, he is murdered, his hands and head disappearing.

In 1964, Charlotte is faced with the demolition of her home as a freeway comes through.  She calls on her cousin, played by de Havilland, who comes home to assist her.  Until de Havilland's arrival, her only companions are Cotten and Moorehead, her doctor and housekeeper, respectively.  Charlotte is in mental decline, and is unwilling to abandon the family manor, despite the entreaties of her friends.

I don't want to give away too much more, but everyone is able to give their all in their performances, and when you have two Mercury Theater veterans (an ego-less Moorehead is really fantastic) and this kind of talent on a film, it can be really something.  I am not unaware that these kinds of performances are now seen as "camp", and there's a bit of that as well.  Subtlety and nuance are not the name of the game for our players.  But either as camp vehicle or straight thriller, I think there's a lot to like here from the creative camera work and visuals to the winding mystery to the actors themselves.  Just bare with it, and the pay-off is pretty good.
Posted by The League at 9/17/2015 01:18:00 PM