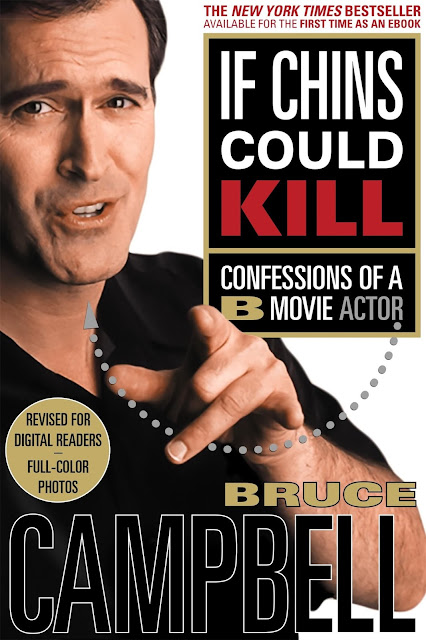 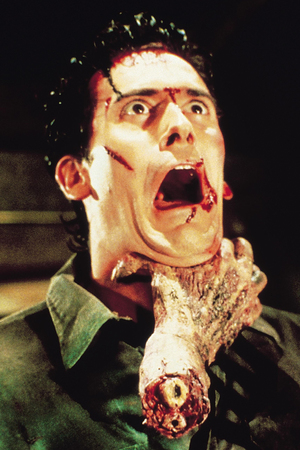 Campbell is a steadily working actor, and if you don't know those movies, its likely you saw Spider-Man's 1-3 (the Sam Raimi directed versions starting from back around '02, not the more recent versions).  Campbell appears in separate but equally obnoxious parts in all 3 movies, really knocking it out of the park as a by-the-book usher in Spider-Man 2.  He also was a big part of the Hercules/ Xena franchise, and has been on cable's Burn Notice, a show I've never seen, and I've only met one person who claims to have seen it, but which was the most watched show on cable for a stretch there.

The book itself is a memoir by a b-movie actor who slips between A, B and D-grade films, has a rabid, cultish fanbase, and at the time of the book's writing, was seemingly trying to make sense of it all, even as he was obviously feeling pretty nostalgic for the early days when he and high school pal Sam Raimi were making Super-8 shorts and scraping together money and time to make Evil Dead on a shoestring budget.  It's not particularly inspirational, but it's probably must-read stuff for any young people considering putting together their own movie after making home movies, YouTube videos, etc...  whatever bright-eyed kids do in 2015.

Campbell talks a lot about his transition from the DIY world of Evil Dead to trying to get a legitimate acting career going, as well as his editing, producing, directing and other behind-the-camera work in Hollywood, a place he seems to not have a lot of love for, and not because he's not at Tom Cruise status.   You get the feeling he's just not wired for the place but has managed to carve out a niche for himself, despite that fact.

1.  For good or ill, the foreward by Ivan and Sam Raimi may be one of the strongest parts of the book.  If you see a copy on a shelf, at least read the foreward.  It's a very small, shiny bit of brilliance.
2.  Bruce Campbell clearly has an eye for the ladies and spends an inordinate amount of time pondering high school crushes.

3.  The book remains interesting after the Evil Dead section, but I kind of wish he'd continued talking in the same detail about a few other projects.  I don't know.  It's hard to find a balance and keep it a memoir without making it 750 pages.  Wanting more is not a bad problem, I guess.

The audiobook format is great.  Hearing Campbell imitate lifelong friends is, frankly, hilarious.  His Sam Raimi gives you a whole new insight into the man.

Further, he clearly had the greenlight to riff from time to time because he inserts little updates here and there when he has some interesting new information on what happened to various people, etc... that he didn't have at the time of the book's initial publication.

All in all, it's a good, breezy read.  It's a little odd to read something so light in the non-fiction realm when I'm used to David McCullough histories, or even the epic journey that was the Rin Tin Tin book, but I have no complaints.  It was a good sort of thing to throw in the mix, and my next planned Hollywood read is going to be the 33-hour Disney audiobook bio recommended me by NCapp, which will likely be a bit more of a slog.

I've been a fan of Campbell's work when I've come across it, but I'm nowhere near the obsessives he's got in his audience.  Still, the book gave me new perspective on a guy who is an artist, a technician, a blue-collar worker or sorts, and who approaches his job as not just a punching-the-clock sort of laborer, but a guy who's a skilled craftsman, who looks for detail and appreciates the craft of others, but he's not one to get too pretentious about what he's up to.  He's still pretty darn grounded, at least as of this book's writing.

No love for Bubba Ho-Tep ?

From me or him?

Yeah, I like Bubba Ho-Tep! He definitely gave it a mention and seemed to still really like the idea. If I didn't mention it myself, it's because he rattles through so many projects, it's tough to get them all in.

Bubba Ho-Tep couldn't capitalize on the promise of its opening line:

"The revealing of her panties wasn't intentional or unintentional, she just didn't give a damn. She saw me as so physically and sexually non-threatenin', she didn't mind if I got bird's eye view of her love nest. It was the same to her as a house cat sneakin' a peek. I felt my pecker flutter once, like a pigeon havin' a heart attack, then lay back down and remain limp and still. Of course, these days even a flutter was kinda reassurin'."