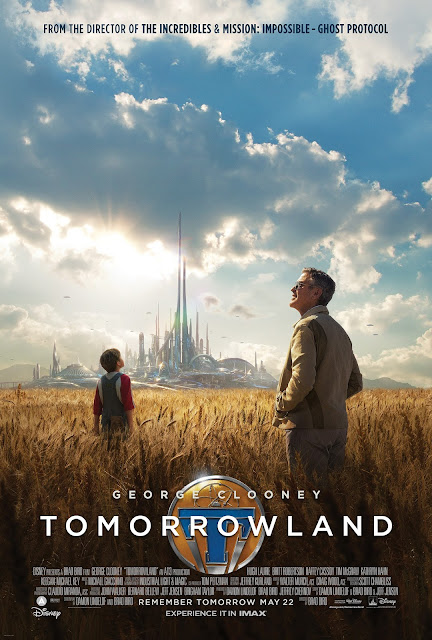 As was advertised, the movie is about a mysterious land just beyond our own, one of golden promise, scientific wonder and exploration on all fronts - a merging of art and science to create a utopia.  But sometime after 1964, this Tomorrowland stopped sending people back and forth across the divide, locked the doors and threw away the key.

In 2015, the daughter of NASA engineer is lashing out as the end of the manned space program means her father's eventual unemployment, yes, but also the end of something she believes in.  By sabotaging the devices that will be used to deconstruct the Cape Canaveral launch pads, Casey Newton thinks, somehow, she'll get Congress and the President to reconsider.  She's a genius in the rebellious way of all movies - rides a motorcycle, uses modern tech in improbable ways, and gets caught to the sound of a sad trombone.  Her behavior draws the attention of a recruiter from Tomorrowland and our adventure really begins.

Casey discovers a pin among her personal affects as she's leaving jail.  The pin gives her a glimpse of this sun-dappled utopia and its majestic spires.

And, this is both where I think a draft of the script probably started, rather than with Frank's back story - which seems oddly placed in the film.  Frank's history means we get a glimpse of the future-world before the 30 minute mark, and Disney gets its money's worth.

It's also where it really starts to feel as if there were competing scripts.  Around this point some Bob Dobbs-faced robots begin pursuing our hero, and aren't afraid to rack up a body count in broad daylight (both of the reviews I linked above made mention of how much these robots freaked out their children - and I was unpleasantly surprised at both the casual murders they inflicted and how it really doesn't seem to jive with anything else we later learn about Tomorrowland.  Why not just dispatch pesky cops with a non-lethal sleep ray or freeze bomb?  Also, why are these robots even around?  To keep track of Frank?).  None of it ever really gets explained - let alone why two robots are running a sci-fi nostalgia store inside the loop in Houston.  I'm convinced they weren't robots at all in the first draft.

From here, things just sort of continue to fall apart.  You get the idea that a lot of drafts of scripts were shuffled together, and so you get something as wonderful as the Eiffel Tower scene, but even that scene is utterly meaningless except as spectacle and possibly as a reference to an old Disney attraction that was not Gilded-Age themed.  So what was the point of that except to delight some Tesla fans?

Most odd, none of the characters seem particularly well thought out with the possible exception of Governor Nix - or at least the movie carves up the characters to such a degree that it's hard to see much more than Protagonists 1-3.  Our lead, Casey, feels like an echo of a 1980's kid-oriented actioner, but aside from a propensity to slow down the action with questions (see, she's inquisitive!) her one defining trait is her supposed optimism and ability to ask "why?"  Both great traits, but somehow that gets turned into a bland Chosen One bland character.

Frank is more or less just George Clooney playing George Clooney, and there's a story in there about a little boy who got his heart broken by falling in love with a robot, but it's pretty clear someone got icked out by this idea and so the story - maybe the most interesting human bit for both Frank and the robot - is dealt with in ellipses.  Which is okay, I guess.  Except that story is more interesting than 90% of what else happens as we go through the all-ages action movie motions.

With the arrival in Tomorrowland, the movie grinds to a halt as our villain reveals himself.  What's not clear is why and how Tomorrowland has seemed to freeze in time - what happened to make the folks living there stop creating?

Yes, the world outside might end, but wouldn't a sane reaction to that be to retrieve as many of the soon-to-be-lost geniuses and start anew?  Get them to Tomorrowland before our world goes kablooey?

Instead, one look around and something clearly was meant to have occurred in Tomorrowland since Frank departed, but it's not clear what.  Political upheaval?  Did the citizens leave?  No Taco Tuesday?

More than anything:  we don't really understand why Clooney was exhiled and we really don't get why so many people have to die if all that happens if he comes back (or the girl shows up) when all they do is arrest them and send them back.

Further, and here's where I'll diverge from my colleagues and their posts linked above:  Governor Nix may have a point.  Preserving Tomorrowland as an outpost of the species' best and brightest may make sense if all evidence from the past 40 years points to an inevitable collapse of humanity.  The movie posits both that Nix is okay with influencing mankind's descent and that, no, he just saw it for what it was.  Again, scripts seemingly at odds with each other.  But Nix does make one big point - and that's that people are really okay with not being responsible for the future.

Brad Bird's best known film, The Incredibles, pushed back on accepting mediocrity as the safe option, and he does no less here.  The debate of philosophies seemed you got an idea of the film he'd set out to make before the studio suits clamped down on him.  It's not okay to hide the future, it only harms the Ivory Tower to cut itself off from society, and it's up to the futurists, the dreamers (who may be limited in number among us, the Ubermensch who will lead the way) to save the day.

But it does get back to what I suppose may have been perhaps a better first scene for the movie - the high school teachers telling Casey and her classmates about Global Warming, about the realities of Orwell's vision, about chaos and fear clenching at our collective heart, and Casey's most important question of the movie:  "So what do we do to fix it?"

This is the question that makes Casey The Chosen One, but it's not clear what happened that made Tomorrowland, Nix and Frank not try to intervene.  It seems odd that these people would be such fatalists unless math simply proved them right again and again.  But asking "can't we fix it?" seems like the motivation behind a world of engineers and scientists that exist without the benefit of jet-packs and ST:NG cast-off costumes.

At best, I ended the movie a bit non-plussed.  You kept seeing these glimpses of the rocket-pack future, but the movie - this thing about inspiration - forgot to actually provide much more than Frank's 30 seconds in that land back in 1964.  For a movie about pushing back against dystopia, the No Taco Tuesday Tomorrowland of the film is... just one more dystopian film.  That's a failure of some sort.

We're stuck with one more movie about how someone finds out they're "special" instead of that spark of wonder, that push for imagination the film sold in the trailers.  We get killer grinning robots and another dictatorship ruled by a cold tyrant, book-ended by the place you wanted to see all along.

At least Hogwarts got a few movies in before they went nihilistic on us.

I do believe in the rocket-pack future, and I'm glad the movie points out what may be keeping us from all of us having flying cars, but I can give or take almost everything else about the film, and that was a huge disappointment.
Posted by The League at 12/12/2015 05:26:00 PM