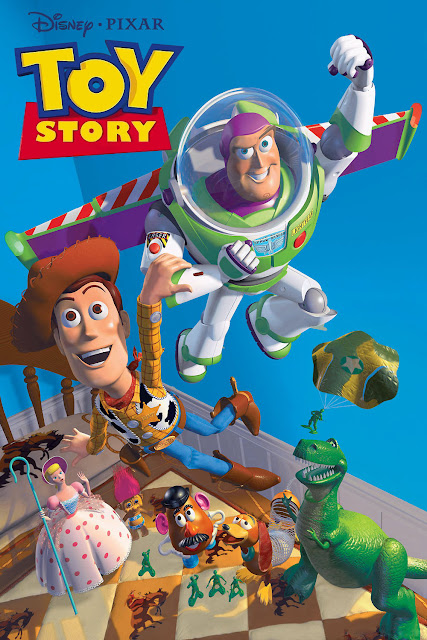 
I very much remember the arrival of the movie as I was mid-way through college and in a Film 1 production class at UT.  Trailers had been out for a while, and I had a pretty keen interest in animation, and was sort of half-dreaming of working in the field when I graduated film school, so I tried to see animated features.  Honestly, I was maybe a little skeptical of Toy Story when I first heard about it, thinking it a stunt to do a whole CGI film.  The movie was released over Thanksgiving weekend, and I hadn't seen it.  I'd gone back to Austin a day earlier than usual as I was too busy working on my own film and doing other assignments, so a movie wasn't in the cards that close to the end of the semester.  But, around 9:00 PM, I was down in the cutting room using razors and tape to assemble hastily shot 16mm black and white film into something like a narrative (I'll share the film sometime.  It's nigh-incomprehensible, but not for artistic reasons) when my roommate/ film-partner showed up, and she'd had a rough weekend.  All I remember was that she said something about the good reviews on Toy Story, and the next thing I knew we were headed for a 9:45 PM Sunday showing of the film.

The movie started and the view around Andy's room almost had me sold, but then the tone in that first minute - and I got it.  This was something not just new from a technical perspective, this was a movie made by people who were trying something new from a story perspective.

I can't say I entirely got that the movie has just changed everything.  Not that first night.  I knew that there was now a new kind of animation and it was important to take note of what Pixar had achieved.  If I had expected a gimmick, Toy Story instead delivered a really well made movie with great characters and what was a unique story at the time (The Shrek movies took the meta-idea to the logical extreme and then beat it into the ground until was begging for mercy).

You can't deny the technological impact Pixar had on Hollywood.  Heck, I think the last 2D animated movie I saw was about a Princess and a Frog, and that came out a while back.  That movie existing is a bit of a miracle as there was a time around 2004ish that Disney had sworn they'd never make another 2D movie, mistaking the absolutely horrendous story-telling of Home on the Range and the negative reviews with "people don't want to see 2D any more".  But a lot of 3D animated movies have come and gone and been just astoundingly terrible or forgettable.  Others are inexplicably as popular as the "comedy" of Larry the Cable Guy*, and make me wonder what is going on with people in general.

I think Disney Animation would agree, the real impact of Toy Story and the arrival of Pixar was in shaking up the formulas the studio was so used to protecting so you could eventually get something like Frozen after iterating through films like Rapunzel (and I'm always surprised people don't talk more about Bolt.  I liked Bolt.).  Storytelling was always paramount at Disney, and when it slacked, even for lovely design and animation in the movies, they could suffer (I'll single out The Aristocats, because... man).   So it's been nice to see them back to champion fighting strength again in that area.

To make Toy Story work, it didn't hurt that Pixar had landed name talent to voice their characters.  Tom Hanks as Woody and Tim Allen as Buzz, of course.  But Annie Potts, Wallace Shawn, Jon Ratzenberberger, frikkin' Don Rickles...  It's more than okay that the voices of these actors will live on for generations in the form of their cartoon counterparts.   After all, it's most likely the only time most people around today have heard the voice of Boris Karloff is in How the Grinch Stole Christmas.

The story itself is maybe the best work-place buddy comedy I can think of, animated or otherwise.  It's not exactly Trading Places, but it has the same "opposites become pals" dynamic I think you can find in the DNA of what they were up to.  There was some real pathos in their weird little story about envy, about disillusionment, but there was also some great stuff in there about what matters most and pulling together.  And the comedy of the film didn't feel like it had been run through the Disney filter.  They got some cracks in there that were just funny and smart.

I have a hard time with a lot of modern animation - I'll go ahead and point out the Madagascar films - which seem to rely almost entirely on weird mugging and falling down repeatedly as the biggest gags.  I like physical comedy, too.  But at some point, I can only stand so much in the way of flailing limbs before I feel like something broke in the writer's room.  Yeah, a 5 year old will laugh at someone farting, but is that your A-Game?

You can't think of Toy Story without also thinking of the sequels, which were each fantastic in their own right (and I will not believe you if you tell me Jessie's story in Toy Story 2 doesn't make you a little weepy).  The technology and storytelling have remained consistent, up to and an including the made-for-TV shorts.  Those ain't half-bad, either.

I suppose if you were looking at me to come down cynically on Toy Story, I just can't.  I think it's a movie that shows the craftsmanship and spunk of people who genuinely care, not the careful corporate overlords who inevitably sneak into these positions of creative authority as companies get bigger and older, and who need to get chased out with a broomstick every once in a while (or, more likely, get caught not paying attention) to give new voices a chance.

I'm old enough now to see which movies will endure, which ones my brother's kid will be seeing and enjoy without a hard-sell from the older generation, and I know Toy Story is one of those.  And, it's funny.  It's one of the very few things that's arrived since I was technically an adult that I have the same affection for that I might have had for if I'd found it as a kid.  I'm just as likely to get excited seeing some poor schlub at the Disney Parks dressed as Buzz or Woody as I would be if I ran into Goofy or Minnie.  And I think that says something about the success of the films and their ability to reach an audience.

So, say it with me:  To Infinity, and BEYOND!


*I will never understand how the Ice Age movies have a seeming infinite number of sequels and shorts associated.
Posted by The League at 12/10/2015 11:34:00 PM