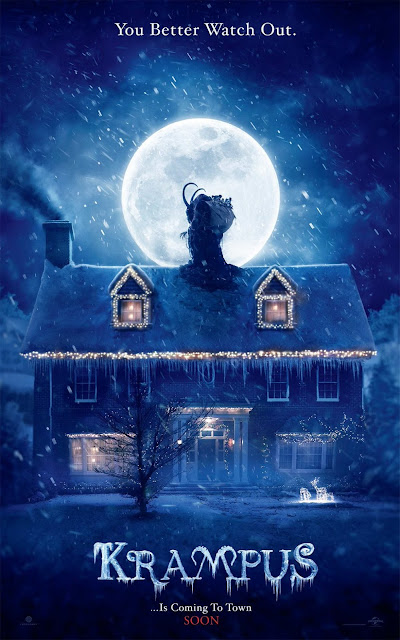 Max is a little old to believe in Santa (maybe a lot old), and he knows it, but we know he still likes the idea of Christmas from his first (and honestly pretty funny) scene in the movie.  Like all of us, Max would love for Christmas to be how he felt about it when he was very young, but he's not quite far enough away from the Holiday for perspective.  In a fit of justifiable Holiday rage, he curses Santa and Christmas.

And, of course, this means Everyone.  Must.  Pay.

It's a bit of a weird movie.  Ten years ago you never really heard of a PG-13 horror movie, but it seems they're becoming a bit of a thing.  The differences between PG-13 and the usual R rating seem to include less language - something you don't notice all that much with a cast that's half kids, a lack of nudity (no context for it here, even forced), and absolutely zero blood despite the mayhem.  I'm not saying I exactly missed the language or nudity - I'm pretty sure Toni Collette is not doing nudity for a B-holiday movie.  But seeing a horror movie with sorta implied impalings and a lack of gore was just kind of odd.  And I don't even particularly like gory movies outside of a couple of John Carpenter flicks.

The movie has a large cast with a lot of folks crammed into the house under siege, and Dougherty maybe loses balance between setting mood/ building tension and actually getting on with it.  That said, there are a few scenes that were almost entirely audio, and they worked really darn well.  There are also some great set-up scenes that seem like nigh-homages to other horror films that worked pretty darn well.

I can't say I was a huge fan of the design of the actual Krampus, once we got to see more than a silhouette.  It felt sort of half-done and Santor is a little scarier.  And once we finally did pull the trigger on the chaos catching up with us, eh.  It was all sort of a foregone conclusion by that point.

However, there are a lot of bright spots in the movie, not the least of which is the sequence where the Grandmother lays out her explanation of The Krampus, and pretty much everything Conchata Ferrell gets up to in the entire movie.  Speaking of, it's a surprisingly good get of a cast, from Ferrell to the aforementioned Toni Collette (who is never in enough stuff for my dollar), David Koechner, Adam Scott and (hooray!) Allison Tolman, who I was afraid I'd never see again after her amazing job of Season 1 of Fargo.  Man, she's just got some natural talent.

And, I did actually like a lot of the creature design and the ideas for Krampus and his band of chaoticians.  And we can discuss the ending sometime when I don't think we'll be spoiling it for anyone.

If I had any major issue with the film, it was that The Krampus seemed to have no real agenda.  Yeah, Christmas is a stressful time and folks power through it.  But he wasn't there to show anyone the light, he wasn't there to restore Max's Christmas spirit.  He was there to torture for everyone kind of reacting naturally to what the season can bring when people who are strangers but in blood pile into houses together and have to slog through.

If one kid having a fit because Christmas spirit was getting quashed was the basis for the arrival and subsequent mayhem, pretty sure we'd all be living in those little snow globes.  While I get that a lot of monster movies are basically "oh shit, there's a monster.  Run!", it seems like this one had some sort of internal logic until it didn't.  And while that's the BIG plot twist of the film - that "sorry, it's too tale" bit, it seems like something got dropped in the scripting or editing.

Anyway, I actually DO recommend Krampus for some late-night holiday mayhem.  Keep it away from the little ones, but it's a nice bit of the Krampus-y antidote to the sometimes sugary-sweet Christmas media we're usually neck deep in right about now, and the insincere family Holiday comedies.  If nothing else, Krampus feels all too sincere in what comes for you when you lose the spirit of the season.  My recommendation:  Keep the fire hot.