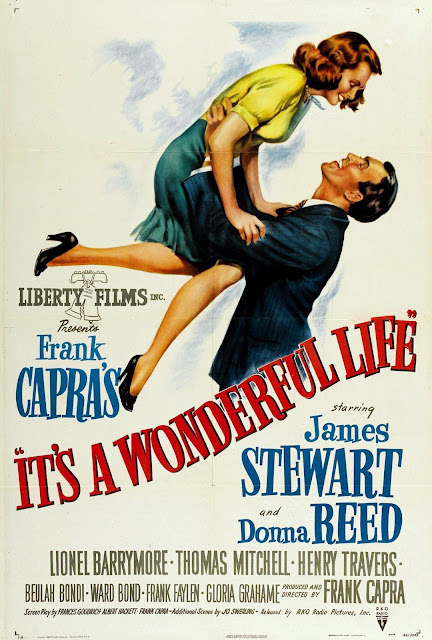 My understanding is that, for a span of years, It's a Wonderful Life (1946) fell into some sort of legal limbo and the film entered the public domain.  Back when cable was still a relatively new concept and far more attention was paid to local affiliates, the movie became a staple for UHF channels to play over and over during the Christmas season.

That's not really my memory of the movie, but I came in on the tail end of that.  By the time I became aware of It's a Wonderful Life, it may have already been spoofed on Saturday Night Live and elsewhere.  It was already baked into the zeitgeist.

I actually do remember seeing the movie for the first time, but I'd have to do some math to figure out which year that would have been.  I know I watched the movie on a Christmas Eve when I was in middle school, and I recall I was in a mood because - as was usually the case - our house was packed with relatives and had become quite stuffy with that many warm bodies.  To make a showering and prep schedule work, I had been ordered to get cleaned up for Christmas Eve services very early in the evening.  This mission accomplished, I was sitting around in church clothes, overheated, hours before we were scheduled to leave.  So, I watched almost the entire movie, as I stewed in my least comfortable clothes, but I was absolutely rapt.  I loved the movie.  I won't say it saved Christmas for me (as long as I got to get home and get into street clothes again, I was good), but it certainly cast how I was thinking of the next few hours in a new light.

As a middle-schooler, I was no fan of old movies or black and white movies.  Not yet, anyway.  And this was an era where TCM did not yet exist and AMC was kind of a weird option on the cable dial that held no appeal for a kid who was just deciding he was too old to be playing with GI Joes.

At the time, I felt the movie was a deeply sympathetic story, but as a kid, you tend to think of everything on screen and what happens to other people as instructive stories, and that's about it.  Empathy doesn't really come into it.

And, from there, I have no idea how many times I saw the film, but I do remember my high school economics teacher showed us the movie to explain what a banking crisis looked like to the average person on the street, and I believe I'd already seen the movie at least twice by then.  And that's when I think I got what was really going on with George.  I might have understood it before intellectually and from a plot perspective, but as you get older and the realization that life is not going to be an endless chain of successes if you just unlock the right sequence and try to live right, the movie began to make more and more sense.

Since then, I have no idea how many times I've seen it, but when I put it in the player this year, I think it might have been 5 or more years since last I'd given it a whirl.

The thing about It's a Wonderful Life is that it's a lot.  It's the entire life of a man.  And a good one.  He was not one without dreams and ambitions, he just made the choices that would benefit others when the time came to make crucial decisions, again and again and again.  I'll assume I don't need to re-hash the plot here anymore than I'd need to walk you through A Christmas Carol, but it's kind of something to admit in a non-noir film that living right and being a good guy can wind up poorly, too.

It tells you a bit of something about what happened between the installation of the Hays Code and what Americans now knew to be true after 10 years of Depression and a global war.  And the words coming out of the mouth of Lionel Barrymore's Henry Potter were exactly the arguments made by anti-New Dealers when it came to why it was okay that Americans should be standing in breadlines and destroyed by poverty.

The movie is very much a reflection of the war that had been one both in Europe and in the Pacific, but it's also a reflection of what middle-America felt it had won by surviving the Depression and the social and economic changes won as a result of that experience.  The things we took as signs of America's greatness in post-WWII America were consequences of the George Baileys trying to sort out how to help the most people rather than standing on doctrine or plutocratically held Darwinism.

To this day, the film is an American cultural touchstone, obviously, but it's also just as obvious that the history and the realities of the film are now glossed over with a storybook sheen.  Potter is simply a villain with schemes saying mean things, George is us, trying to be a good person.  But all of those were and remain real decisions and real doctrines, though we may have cleaned up the language a bit.

People talk about the Rockwell-style depiction of America in the films of Frank Capra (of which I've seen very, very few), but between this film and Mr. Smith Goes to Washington, what gets lost in the sort of patronizing language and cynical view of such a thing is that the ideals Capra is espousing are difficult.  He's not talking about the practical or easy path.  His characters may be quixotic, but they're also holding onto the promise of America in a period that knew what fighting for ideals looked like, and knew what they cost.

You can remove the politics or context and see the movie as a straightforward message about karma - that the good you do will repay you when you've lived a good life, and that the good deeds you do in life ripple throughout the lives of others.  And that's a good reading, and something that should hit you like a ton of bricks.  Being George Bailey is hard.  It's not lucrative, and, in fact, it's financially precarious for both you and your loved ones.  And, as we see when it all falls apart on one bad Christmas Eve, it's pretty darn stressful holding all of that together, especially when you're not exactly fulfilling your own ambitions.

But, whether George Bailey saw the folks of Bedford Falls show up and fix Uncle Billy's slip-up, or whether he went to jail for his Uncle's incompetence (and under suspicion of infidelity with Gloria Grahame, something he could be high-fiving his fellow inmates for people believing he'd achieved), George gets the gift of seeing it wasn't all for nothing.

While you or I may not get a celestially-blessed Christmas Eve peek into an alternate reality where we didn't get to see the fruits of our labors, maybe we can hope that those hard decisions paid off, and we made the world a bit better for our being here.

And, man, is everyone good in this movie.  Especially Stewart.  One of my favorite scenes in any film, anywhere, is the one where George is first speaking with Clarence the angel as Clarence explains who he is and what he's up to, and even moments after deciding to kill himself, and drunk and in a mood, George is still trying to sort out what he sees as the problems of an underdog, even if he's a little drunk to be doing so.

People remember the impersonations and imitations of Stewart and forget the guy was a powerful actor in his own right.

On a final note, you have to admit - yeah, Bedford Falls looks like a swell place to live and raise a family, but Pottersville looks totally fun.  And, it is true.  The worst fate you can have in this world is winding up working in a library.