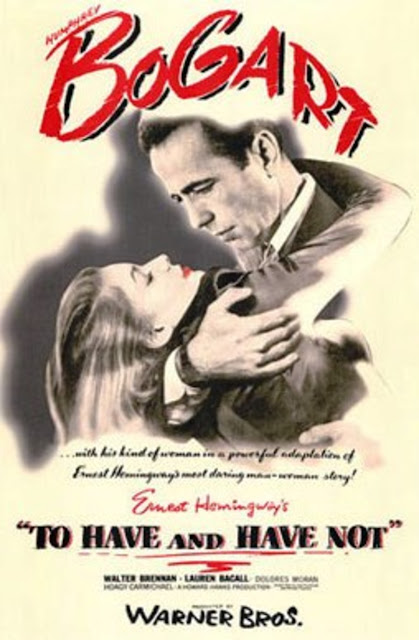 Based on an Ernest Hemingway novel, To Have and Have Not (1945) stars Bogart and Bacall as two folks avoiding the war who stumble across one another on the French-Caribbean island of Martinique.  As near as I can tell from a quick glance at Wikipedia, in the 8 years or so from the book's publication and WWII led to the adaptation undergoing some significant alterations, changing up quite a bit, including Nazi-sympathizing Frenchmen, and basically - WWII in general.  I haven't read the book yet (actually getting through most of Hemingway's novels is a bucket list item for me, but I get so easily distracted), so I'll have to trust the internets.

The movie takes place on the French island of Martinique, a place in a precarious position as Germany has taken over France, and the influence is felt even this close to the United States.  Bogart plays a captain of a small fishing vessel who has successfully avoided participation in the war and is mostly interested in getting by and saving his own skin.  Bacall plays a pickpocket and hustler who has landed on the island with no money and no prospects except for grabbing the wallet of Bogart's latest client who owes him nearly $1000 (and who planned to skip without paying).  He's also being asked to help out some French Resistance locals, but doesn't want to get involved, but when the German-controlled authorities get into a shootout with the resistance, Bogart's customer dies in the crossfire before he can pay and the local police Captain seizes what money Bogart does have.


Bogart's best bet is to make some money assisting the resistance while also wooing Bacall and keeping his alcoholic best pal in check.

It's an odd movie, and I'm unsure why the studio decided it needed to push the story through  at the time it did.  I have no idea how fans of the book would feel about the movie with the drastic changes I picked up on, but the movie itself only ever feels like it half-works, in my opinion.  It's trying to be an echo of Casablanca (1942), with a world weary and decidedly neutral Bogart getting caught up in the war despite his better efforts to avoid it - a conscience seeping out from under the hard exterior.  But there's no conflicted romance, and Bacall - despite some great dialog and her general Bacall-ness, doesn't get any particularly good stuff to sink her teeth into (see: Key Largo or Dark Passage). We do get the odd treat of seeing her sing, which is not something I think of her doing.

There are other characters, including the hotel owner, Bogart's drunken pal and a pair of French underground resistance-types.  But no one overly memorable.  No great character work.  This is the first movie I've seen where I paid attention to Hoagy Carmichael who plays the piano player in the film - and now that I know Fleming intended for Bond to look like Carmichael, it's kind of fascinating to wonder what Fleming saw there.

Next up watch "The Breaking Point" with John Garfeild. A truly dark film noir based on the same book.

Wow, I'd totally forgotten about "Breaking Point". I did see part of it, but it was a while back, but I can't say I remember it all that well. I think I have it mixed up in my head with another Garfield picture or two, so I need to re-watch to untangle it.