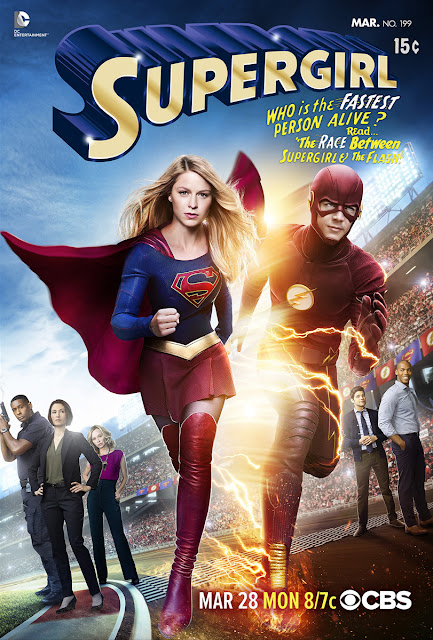 I was never a fan of the "two heroes meet, fight, realize it's all a mistake and then go off to fight a common threat" trope of comics.  So, yes, just seeing the title of Batman v Superman: Dawn of Justice literally told me everything I didn't need to see in the WB opus (now down over 70% in ticket sales from last weekend).  It literally makes no sense for a person dedicated to improving things for other people to start a conversation by throwing a punch at someone else's head.  Frankly, it always kind of diminishes whatever I'm reading when the writers get lazy and that's the path they follow.

I've been a fan of The CW's The Flash since episode 1, and I continue to enjoy the heck out of that show.  From this DC nerd's perspective, this is how you update a character and make the concept work in another medium with different needs than the comic page or context of National Comics in the Jet Age.  If you're going to change up Barry's origin story a bit, this makes sense, and I like the family with which they're surrounded Barry, both the Wests and his "work family", made up of repurposed C and D listers.

The show is far from relentlessly cheerful - villains are a threat, and we've had two seasons with serious arcs casting a shadow over the events of everything else.   But the core characters don't wallow in self-imposed pity parties and comply with the notion that being a jerk is a prerequisite to intelligence or depth of character (it seems Arrow is continuing to struggle with how to dig themselves out of that hole).  Barry and Co.'s ability to keep on going and improve things for themselves and the world is at the heart of what I like about ongoing superhero comics.

I wrote more than one post regarding the rocky start to CBS's Supergirl, but at some point the show started getting a grip on what it is and could be.  Once it dropped some of the standard soapy TV tropes and got on with the business of superheroing, it's been on a gradual incline of watchability.  They dropped the lame "nice guy" storyline for Win, and, to my great satisfaction, the seemingly one-dimensional character of Cat Grant (played by Calista Flockhart) blossomed immediately into a mentor character for Supergirl and her alter ego.  And, of course, the long game of naming Hank Henshaw as leader of this DEO business pulled a switcheroo and turned out to be a huge highlight of the season as the character turned out not to be the ridiculous Cyborg Superman but Martian Manhunter.**

I never disliked the cast of Supergirl, but CBS applied a lot of old-hat tricks, believing they knew how to make the show work for the broadest audience, but it seemed outdated and a drag on the show's velocity.  And, while I'm not sure we're getting a second season (it hasn't been renewed so far as I know), a second season could get down to brass tacks and be quite fun.  Plus, they've said Lynda Carter could play the President next season, which this site heartily endorses.  It could be a lot of fun.

And there's that word.  Fun.


Much to my surprise, CBS and CW came to an accord in 2016 and managed to get The Flash (as a character) onto the CBS show for a single episode.  It makes sense not just because Barry and Co. at STAR labs have been dealing with multiple earths this season, but because bending time, space and dimensions has been the domain of The Flash since Flash of Two Worlds back in the day.

Barry's appearance brings us not two superheroes punching each other in the face, but two superheroes who circle for a moment trying to figure out what is happening before Barry pulls off his mask and offers his hand in friendship.  Like an adult.

Look, I've not seen Batman v Superman, but the grown-ups I've talked to who've seen it have been cackling their way through the contortions the plot takes to get Superman and Batman face to face and angry.  I can't say much about it, not having had seen the picture, so we'll just put a pin in that thought until one day when I have seen it.

But I like consistency of characters across media.  The DC pantheon are not just costumes to be filled with whatever persona a producer wants to dump in there.  These characters have decades of story behind them, and while it's easy enough to point to variations over the decades and from writer to writer, there's been a concerted effort to ensure the characters remain true.  I would no more want a Superman who thinks of himself as a tactical weapon than I'd want a Frank Castle who wants to talk it out first with the mob.  Or an Enemy Ace who wants to drive boats.

And, while so many things are wildly different from the comics, what both Supergirl and The Flash have nailed are the fundamentals of Barry and Kara Zor-El.  If those two met, of course they'd be cordial and friendly and maybe a bit amazed by one one another.  Even more fun, Barry remains Barry from his own show through-and through, stumbling over his own excitement at his newfound friends and a parallel Earth that isn't trying to kill him.  Kara, for her part, seems delighted to meet a non-alien metahuman and BOTH actors seemed positively beaming.

Now, I get that if you're between 16 and 28, you have some pretty firm ideas of what's ridiculous and what's not.  And, to you, bringing ice cream to Supergirl and Jimmy Olsen is a cheesy gag.  But, when you get older, you're going to really come to appreciate every damn ice cream cone and look of delight on the face of a Supergirl in a world full of people who need a moment of joy.  And someone willing to make your life better instead of kick you in the shin isn't necessarily rare, but it's something to be celebrated, not seen as naive.

Superman's Never Ending Battle isn't one of misery and self-pity/ doubt.  There's a reason he gets depicted as the guy pulling cats out of trees and giving kids balloons.  I've long thought of Superman as the guy who knows all the cruelty the world has to offer, but he knows that we can be better than that, and the positive moments are the ones we need to strive for.

Of course we have Batman, and we need Batman.  He's the voice of pragmatism and who wants to take the direct route to stopping people from being awful.  But that need not be all of the DCU as it reaches new millions of people through movies and TV.

In the final issue of All Star Superman, one of the comics I most heartily recommend to understand Superman, distilled down to his purest essence, Lex Luthor gains Superman's power.  He is ready to use it to destroy/ subjugate the world, until he sees the world through the eyes of Superman and realizes:

In their own way, this is the same vibe I get from the Supergirl TV show and The Flash.  Both characters are working together with their teams to make the world a better place, one rescue at a time.  It isn't a burden, it's a joy.  And though you may have different powers, perspectives, motivations...  it's still, as Fro-Zone might observe "for the greater good".

As always, my hope is that the long curve of DC Entertainment will see the joy that can be found in their characters not as dark martyrs, but as icons of the good.***  It'd be a shame for Supergirl to disappear at this point when the show seems to be finding a new and better path.

But you know we're getting at least three more seasons of The Flash.  Which is all good, because I haven't seen nearly enough Gorilla Grodd yet.


*And you don't want to know what I paid to find that out.  But, at least it was fun and had nice artwork.

**Why no one since the 90's has been able to write a decent MM book, I cannot say.

***that may require less murdering and casual acceptance of mass fatalities during your little dust-ups
Posted by The League at 4/03/2016 08:02:00 PM

I really loved this episode. The quick bit about the ice cream was priceless. I really hope that Supergirl gets renewed and this Flash/Supergirl cross over becomes an annual thing. The only weak part of the show was the ending as I feel that the writers had to figure out a way where neither the Flash nor Supergirl ended up saving the day. It seemed to be more of a pissing match between CBS and WB exec's.

wweeeelllllllll.... isn't that the problem with all Superhero v Superhero questions when they put them into practice? You never actually get an answer, you get a convoluted story where Batman freezes because he finds out he and Superman's moms have the same name.

I have and cherish my "first race between Superman and Flash" issue, but its not actually a satisfying race when you read the comic. The most you can say is "they sort of broached the topic". They always have to keep both fanbases happy, and that means making no one happy.

Still, it was a fun episode, and certainly more satisfying than what The Flash is up to in last night's episode.

Yay, Supergirl is renewed but on the CW. Hopefully the reduction in budget isn't too noticeable.

I am confident they can make it work. Although National City may look a whole lot more like Vancouver than LA. And, frankly, the CW may give them more freedom than CBS was willing to give over - a control that I think hurt the show in the first half of the season.

But so much was getting set to not HAVE to be a part of Season 2 (conceivably, they could ditch the DEO and Lucy Lane) based on how the show wrapped up Season 1.

Yeah and now that they have more control they'll be able to do cross overs easier. Also, has Lucy Lane ever been good in any incarnation ever?

I feel like Lucy Lane was only ever useful as every guy's nightmare girlfriend in the pages of Jimmy Olsen back in the 50's and 60's. She was awful, and that was the point.

But, yeah, that show had no idea what to do with her but wouldn't let her go. I could never figure out if it was the role or actress who made me care less about her.