We say Good-Bye to Sam the Cat

Jamie and I are very sad to say good-bye to Sam the Cat.  Today poor little Sammy merged with The Infinite after about 15 years of being about as good-natured and sweet a cat as you were ever going to find. 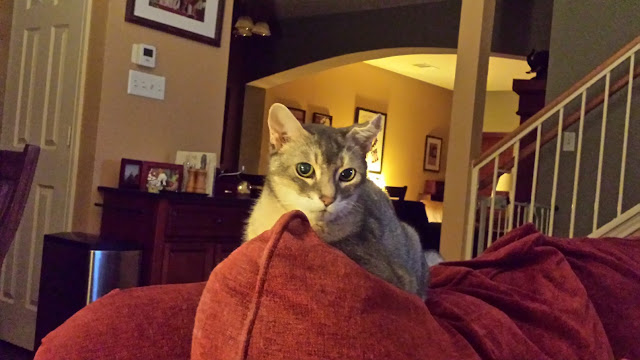 Sam is not our cat.  He belonged to Jamie's Dad.  But, as Jamie's dad travels quite a bit, Sam became our "rent-a-cat".  After Jeff the Cat passed, we went from cat-sitting by shoving him in the guest room to letting him roam free.

He was part of a pair Jamie's parents adopted way back around 2000-2001, named "Sam and Pippin".   Pippin passed some time ago, so it's just been Sam for a long time.

I'd gotten quite used to having Sam at our house as he'd be with us for weeks at a time.  During these stays, he'd often sleep between me and Jamie, and hang about with us downstairs.  He'd walk around the house with a little Beanie Baby stuffed bear, and sometimes he'd walk around yowling, just trying to either find you or get you to come to him.  He had personality in spades.


After 14-ish years with Jeff the Cat, a cat with maybe not the world's best disposition, Sam was a bit fascinating to spend time with.  All he seemed to want was to spend time with you, get some skritches, and maybe sit on you, if he could manage it.

For reasons too complex to get into here, "friendship!" became the one word we decided was constantly running through Sam's head.

Heck, he was such a part of the family, when Jamie's Dad came over for Christmas Day the past couple of years, Sam came too.


While I'm very sorry to see him go, I can say that Sam led a life where he never knew a moment where he suspected anyone felt any way about him other than "friendship".  He was a very sweet cat, and he had many people who loved him dearly.