Murder on the University of Texas Campus 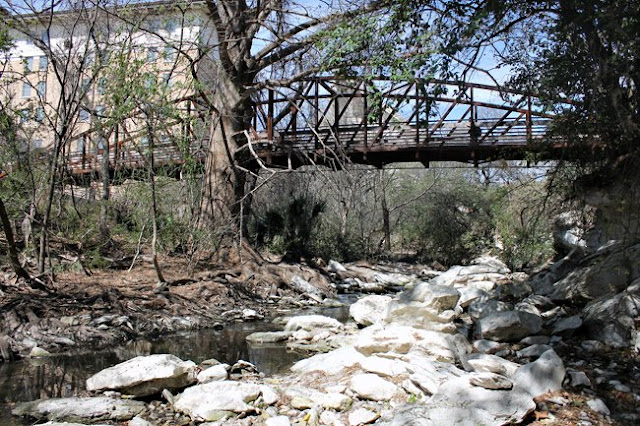 Waller Creek runs alongside and through the University of Texas campus.  At all points, it's been left alone, one of the few places where a narrow strip of "what was" winds and trickles between buildings and along roads, a narrow grove of trees surrounding it on both sides for the entire run.  It's not just a ditch or arroyo.  It's a deep cleft in the earth, ten feet down or more in most spaces.

When I was a student living in Jester Dorm, we all took a shortcut from the parking lot a fair distance from the dorm, where we'd have to descend into the wooded creekbed, hop across the rocks poking out of the water in our Doc Martens and Adidas, and then mount the steep rise to pop back out of the treeline and onto the athletic field backed up to the monstrosity that was my home for a year.  There, the creek ran wide and shallow.  Twenty-odd years later, a bridge spans that area.

Further toward MLK, the creek runs even more deep and wide, and I've seen exotic fisher birds standing at the water's edge, odd and out of place with five lanes of traffic on the bridge running by them 20 yards away and 13 story dorms looming in the background, but a reminder that this creek is part of the world, that the campus came long afterward, and may well be here long after the buildings are torn down and the people all gone.

A couple hundred feet from my freshman-year short-cut, Waller Creek also runs behind The Alumni Center, a facility conveniently located across a wide street from Darrell K. Royal - Texas Memorial Stadium.  The Alumni Center is a low-slung facility, lodge-like, great for banquets and housing the loyal donors on gameday, windows facing the trees reaching up out of the creekbed.  This intersection also includes a classroom building for the Fine Arts as well as the Performing Arts building. 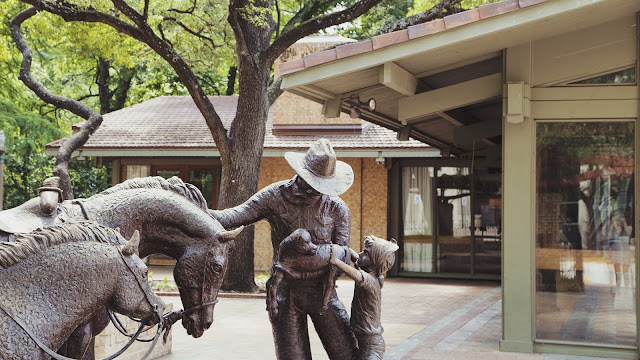 On Monday morning, the UT Austin Police, alerted by a roommate to the fact a freshman was missing, began searching for the missing student.  Around 10:30AM Tuesday, police found the student in Waller Creek behind the Alumni Center.

The normal sorts of protocols were followed.  Names were not released until Thursday, when the family had a chance to be alerted, police had time to follow up leads, the university could provide some assistance, etc...

UT Austin is a massive school with more than 50,000 students, tens of thousands of faculty and staff, and situated in the heart of a growing city of 2 million in the greater metropolitan area.  This year marks the 50th Anniversary of the UT Tower shootings which killed 16 and left more wounded.  Considered the darkest day in UT history, it has also shored up a sense of both community and a need for security on campus.  We have our own police force, plus a more civilian security team that does not carry firearms.  In the building where I work, we nearly missed a massacre just a few years ago when a student came to campus with an assault rifle and shot up a few buildings before going to the 6th floor of the library and committing suicide.  That he chose not to take any other lives on that day, with Virginia Tech in very recent memory, we're all incredibly grateful.

And we've had murders off campus.  Most recently the brutal murder of Jennifer Cave comes to mind.

None of it ever makes sense.

But Whitman was crazy - snapped.  As was the young man who took his life on the 6th floor of my building (in what has been just one of a few suicides in the building, from what I'm told.  Libraries.).  Cave's death was among friends, and unexplainable as it might be in rational terms, it was not random.

Today the Austin Police and UT authorities released the name and photo of the young woman killed.  An 18 year-old named Haruka Weiser, a Dance major who had come from Portland, Oregon on scholarship.

In the photos, Weiser doesn't look that much different from the faces I see everyday as I head to the coffeeshop, stand by the security guard's desk wasting the guard's time with my inane banter, pass on my way to The Drag to grab a bowl of vermicelli.  She's in the earliest days of adulthood, she has that glow of promise all around her that you can see coming off the kids in waves.  It's all the starting point right now.  It's all uphill and a million question marks about what comes next and next and again after that until they are who they'll be.

It sounds terrible, but I hoped it would be a simple story.  An angry ex-boyfriend or someone a roommate or classmate would say had been calling even though she didn't want them to.  Someone who had a reason to know that Weiser walked along the creek to get to her dorm, to her room behind passcards and locked doors.  By this time, we'd be hearing about charges pressed.

But that doesn't seem to be the case.  At about the same time authorities named the victim, they released video of a suspect, but it's fuzzy, nighttime video of a young man who could be anyone in a backpack.  He has a bike that's likely not even his own, and his face is obscured, at best.  I assume the police know something about this person, because it seems otherwise as if they picked a random person riding on campus.

It's a large campus, and both as staff and student, I can attest to the fact that it's often terribly anonymous.  You often run into people you know, but you can absolutely cross campus without bumping into anyone familiar.  It's a small city within a city.  And I used to come to campus at night to get to the library or work on projects, and it is monolithic, and deserted.  People don't make eye contact when they do pass.

I'm 6'5" and not a simple target for anyone, and I'm utterly shaken by whatever happened here.   Not so much for myself, but working in the library, I can also say that we get our fair share of folks coming in off the street who have rap sheets as long as your arm.  Campus has no walls, and by intention, anyone can wander on from any side of campus.  At the library, that's a feature, not a bug.  We're all about open doors, but that policy can keep the UTPD plenty busy.  Despite the very real culture of safety, much will be examined in coming days and weeks both officially and as students consider their evening plans.

My sympathies could not run deeper for the Weiser family.  To have lost a child is terrible, but half-a-continent away and with no answers passes beyond devastating.  They put their trust and faith in the bubble of safety that is UT Austin, sent us their daughter, as so many send their daughters to us each year, and now all we have to offer is more questions.

I am unsure how the students are dealing with it.  Likely through sarcasm and gallows humor, if I remember my college years.  But when the sun goes down on campus, the last jokes will fade away.

I so deeply want for campus to remain that same place of safety that it has been for year after year of students.  Even in the poorly lit, shadowy areas between buildings and crossing creekbeds to save yourself an extra 100 yards of walking at 3:00 AM, you want to believe this is all okay here.  Any harm done here will be by me, to myself, and I'll bounce right back up again.

And I hate to think of one student who had learned to trust the campus the way all of us do, and what it cost her and her family.

UT Austin has handed over the investigation from our own police force to the APD.  For good or ill, APD has better adjusted to the growth of Austin and has experience with homicide in a way UTPD does not.  For now, everyone seems to be handling the case as well as you could hope.

And, in the meantime, my thoughts are with the Weiser family, but also all the students who can't simply walk alone at night on a campus where that has always been the case.  And I hope its something they can feel safe doing again soon.

I feel bad for the UT community. I get a large number of cases on my docket that originate on the UT campus. We spend a lot of time working with the homeless population and mentally ill individuals in and around UT, trying to discourage them from harassing students and trying to get them into treatment so my misdemeanor cases don't turn into tragedies. The suspect who's been arrested is young. On a professional level, I'm very curious to see what his story was. It goes without saying that I feel terrible for the victim and her family. This is also the nightmare scenario for a lot of people who work pretty hard to keep UT and the downtown area safe.

I just hope that this situation is seen as the outlier it has been in UT's history and that we can continue to have a campus that's free for anyone to traverse. In many ways, the life around campus and getting used to a life outside of suburban cloisters was part of what I took away from my five years at UT. But i expect we'll have to consider what needs to happen to increase safety for everyone.

I remember lunching on fajitas (for the first time) on an alumni game day (Dad, BBA '74).
I remember mucking through the creek during my Freshman year.

It felt like a bit of the wild there on the 40 acres. It was a place for the car-less and stressed to sample the wilds.

And now it has a sinister rivulet in it.