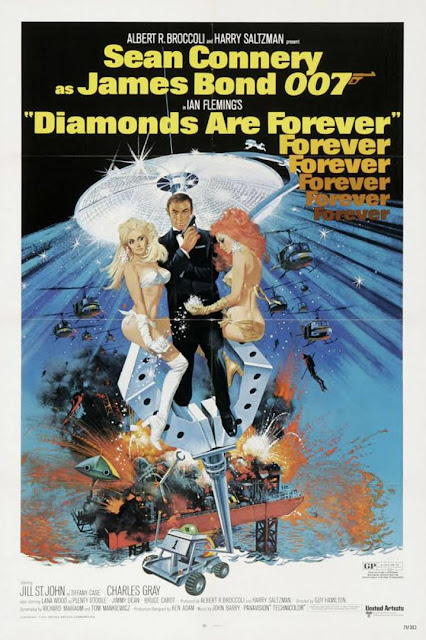 This may be the true start of "silly Bond".  Or, at  least, a more lighthearted Bond franchise.

Diamonds Are Forever (1971) saw the return of Sean Connery to the role after the George Lazenby experiment (and, yes, we skipped On Her Majesty's Secret Service because we'd watched it just prior to starting on the chronological viewing of Bond films, but we'll get back around to it).  He looks comfortable in the role, picking up the thread of revenge for the death of Diana Rigg at the conclusion of the prior movie.  Oddly, it's not stated directly, but Bond tracks Blofeld to a secret lair where he manages to dispatch him before the credits even roll.


With Blofeld no longer a consideration, Bond is assigned to track a diamond smuggler, intercepting his contact - Jill St. John as Tiffany Case.  Bond gets the diamonds and moves them to LA and then Las Vegas.  From there, it's a small showcase for Las Vegas as it stood in the late-60's/ early 1970's - a dirt patch with gaudiness as far as the eye could see.  A Howard Hughes stand-in seems to be wrapped up in it, and so may Spectre.

All in all, it's certainly a fun movie, if a bit toothless.  The edginess of From Russia With Love has been diminished - and even the stunts and excitement of On Her Majesty's Secret Service are reduced to a goofy moon-buggy chase across the Nevada desert.

Not everything in the movie makes sense (like - what was going on with the astronauts and moon buggy?  Were they suggesting the moon landings were faked?  Were they practicing?  I couldn't tell what was happening).  But there are a lot of little bits that don't quite make sense, which were either cut down for time or never quite worked.

As per our Bond girls, frankly, Tiffany Case seems far removed from Pussy Galore when it comes to someone worth Bond's time.  She's a bit more in the Honey Ryder mold and she sometimes seems to be in the movie to fill out a bikini.  And we do briefly get Lana Wood as Plenty O'Toole.  I don't make the names up, people, I just report them.

I actually remembered some of the cooler ideas and gadgets from this movie, though it's been forever since I'd seen the movie twenty years ago (spoiler: fake fingerprints!  brilliant!), and I could remember the final destination for the diamonds, if no other details.  But the highlight of the film for me may be Mr. Kidd and Mr. Wint.  That's just good writing.

Connery is actually pretty okay in this movie, and as this was his last Bond for a bit, I'm going to have to bid him adieu until we meet again in the 1980's.  Now onto Roger Moore and the most perplexing boatwork of all Bond movies.