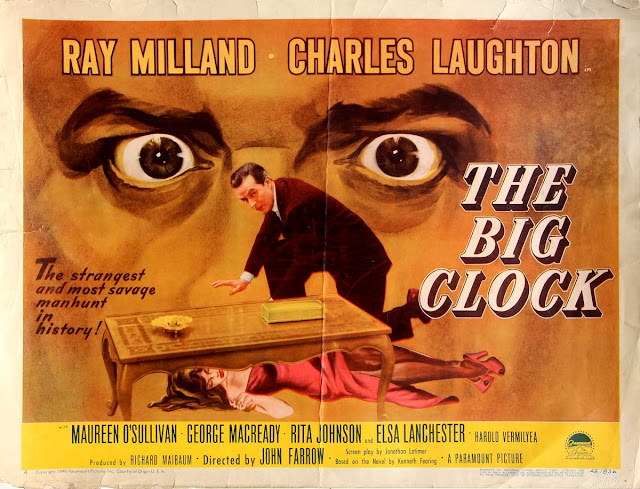 Sometime about twenty years ago I actually read the novel this movie was based on, but all I can remember about it is that there is no literal "Big Clock", and more than there is any literal "Long Good-Bye" or literal "Big Heat" in those respective movies or books.  But, hey, not so in the movie adaptation of The Big Clock (1948).  This movie practically goes full-Batman in literalization of a rich sociopath's obsession.

The movie definitely qualifies for noir - a mysterious and sultry woman is responsible for the life-altering, seemingly insurmountable situation a man finds himself in - one only partially of his own doing, but one had he been behaving better, he never would have found himself in.  But, really, it reminded me in many ways of a Hitchcockian-thriller, and that's no complaint.  I enjoy a good Hitchcock movie from time to time.

Ray Milland plays George Stroud, the editor of Crimeways, a successful weekly detailing crime stories - and part of the Janoth publishing empire (all of the publications have names ending in "ways".  Airways, Sportingways, etc....) He's been at it for seven years, failing to ever take the much anticipated honeymoon he's owed his wife since being hired by Earl Janoth (Charles Laughton) the night of his wedding - and he's never managed a vacation day in all those years as Janoth manages and manipulates his top performers.

George is met by Pauline York (Rita Johnson), who claims to have dirt on Janoth and wants to commiserate about what a rotten jerk Janoth can be.  On the day Stroud is set to leave on his vacation - his troops ready with marching orders - Janoth insists he stay and Stroud quits.  He meets Pauline to get some information, but winds up drunk, missing his train with his wife (an unflatteringly righteous Maureen O'Sullivan) - who leaves without him.  Miserable, he wanders the city with Pauline, buying a painting out from under Elsa Lanchester and being seen in a number of places.

As he leaves Pauline, he sees Janoth entering her apartment.  Only to be told that "someone" has murdered Pauline and he must, as editor of Crimeways, track down the murderer - a murderer Janoth has already framed to be Stroud (whom he believes is someone else).

Like many Hitchcock films, it's a thriller where the "common man" is actually "upper middle-class executive man".  The movie desperately wants to satisfy the Hayes Code, and the fact that Stroud isn't stepping out with Pauline feels positively strained, and when Maureen O'Sullivan keeps showing up and making Stroud's situation worse, you kind of wonder if maybe Pauline wouldn't be more fun - but she does represent home and hearth.

But - holy cow - is this movie great at building tension.  As Janoth and Stroud both work their angles, the clock ticks, Stroud's time ticking away before he's identified as man with Pauline.

The movie is also filled with great character actors, not the least of which is Harry Morgan who used to play murderous weirdos and tough guys once upon a time.  Of particular delight is Laughton's wife, Elsa Lanchester - whom longtime readers of this site will know I'm a tremendous fan of in Bride of Frankenstein.  Lanchester plays an unsuccessful artist with a, uh, rocky romantic history, and the sort of complicated domestic homelife not usually played for laughs in movies of the 1950's, so this one made it in just under the wire.

It's a great movie, probably mostly overlooked these days, but one I'd suggest to Hitchcock fans looking for something by other folks looking to create that same flavor.
Posted by The League at 5/30/2016 12:49:00 PM

Oh man, I just read this book last month! I thought it held up really well.