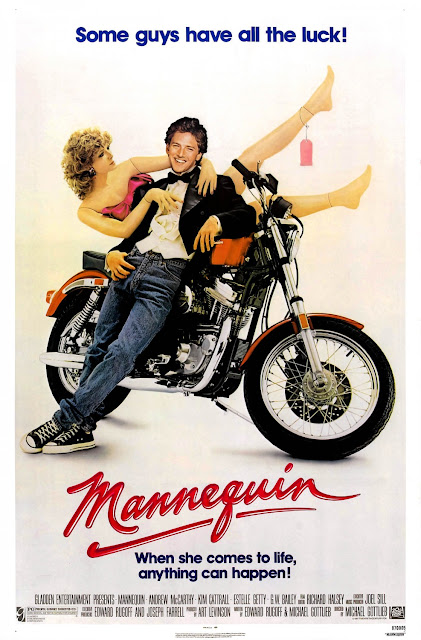 For some reason, prior to Saturday evening, I had never seen the 1980's romantic hit comedy, Mannequin (1987).  I wasn't much of a fan of The Brat Pack in the 1980's, and didn't really care much about whether or not Andrew McCarthy would or would not find love in a movie about Mystic Pizzas or Real Dolls or whatever.

However, here in 2016, Jamie and I were at dinner, and somehow it came up that I had not ever seen this 80's staple, and she pointed across the table and said "when we get home, we're watching Mannequin".  People, if you knew how many movies I've made Jamie sit through because I found some inherent value to that movie which she had not seen or which  had escaped her (and, often, by movie's end would continue to elude her) - you'd understand, I didn't really feel I could say no.

If Jamie can sit through Conan (again), I can watch Mannequin.

In the 1980's, the first generation of the channel Nickelodeon had a show for little kids on during the day called Today's Special.  Really, the only time you'd catch it was during the summer or if you were sick.  But the show ran for 7 years and was about a lady who - each night - brought a mannequin to life after a department store closed, and they'd do the kinds of kind-of-fun-but-educational stuff you'd see on TV for kids back then.

For some reason as a kid I was very aware the show was made in Canada.  I have no idea why that seemed important to me.  But it made me think Canadians had weird ideas about entertainment.

But, for years, I assumed Mannequin was a rated-R version of the same basic concept, but instead of learning about spelling or how a garden hose works or whatever, there was sexing going on in housewares.


All cards on the table - the only real enticement that the movie held was that it stars Kim Cattrall, whom I didn't think I'd ever made a big deal about, but Jamie had somehow pieced together from my mentioning Gracie Law in Big Trouble in Little China maybe one too many times that I may have been more than happy to see Cattrall in a movie.  Anyway, you never know what the wife has figured out.

Look, I find Sex in the City as soul crushing as the next person, and as Steven Harms once wisely pointed out - Kim Cattrall is doing one long Snagglepuss impersonation through the run of the show - but I find her a highlight of the Police Academy movies, and I'd leave it at that - but, real, honestly, I thought this movie was going to be rated R and we were going to have more lingerie sequences than what the movie ended up having (one extreme wide shot lasting approximately 3 seconds).

I am but flesh and blood and I have my weaknesses and vices.  I just don't think dudes often fess up to finding Kim Cattrall appealing for some reason, but if I must walk alone as the first to do so, so let it be my fate to be this man.

So, yes, when the movie started and I saw it was PG, my hopes began to fade.  There would be an minimum of sexing in the housewares.

For a movie everyone seems to have seen and complained about the premise more than anything, Mannequin is an amazingly inept production.  It's a genuinely strange movie, written as a sort of hammy comedy with jokes as broad as the Pacific Ocean and seeming to take cues from it's contemporaries while retaining a kind of odd 1980's sitcom-ish quality of google-eyes at the waaaacky events of the movie, lots of gaping, and a plot that makes next to no sense even for a movie about a mannequin possessed by the 5000 year-old spirit of an Egyptian who was picky in the romantic department.

It's the sort of movie where - in order to make the flimsy premise work - a store changes out it's store front window seemingly every night, and those displays are so amazing, people gather out front to stare.  But, curiously, no one on the crew thought to hire extras to demonstrate how this meant the gigantic department store they got for the film's shoot would look filled up and doing brisk business.  I mean, what were people doing in Philadelphia in 1986-7 that they were too busy to show up to wander around a store while cameras rolled?  None of the "real" parts hold together any better than the talking mannequin.

Scenes seem to have been shot in a take or two, with the director seemingly more than pleased with the hammiest of takes.  And, it's weird, it's like the characters all know their lines, but they aren't actually talking to each other at times.  They're sort of just saying things in the order in which the lines are written down on the page - which made me wonder if the film was shot with extremely poor coverage, and the editor just worked with what they had, or what happened. I dunno, it's weird.  It just feels like there are constantly beats held for laughter or something.

This was director Michael Gottlieb's first feature film, and he's go on to direct three more, including the Cheech Marin film The Shrimp on the Barbie (which he'd release under the name Alan Smithee - never a good sign), Mr. Nanny starring Hulk Hogan, and A Kid In King Arthur's Court, which came out when I was 20, so no one could make me watch it.  But none of it really suggests Gottlieb is a forgotten genius of cinema.

The movie features GW Bailey who you may remember as crusty Captain Harris from the Police Academy movies.  Maybe Police Academy is not the height of refined urbane comedy, but the movie takes what Bailey did well before and kind of just drains it of any joy or fun - just making him sort of annoying, and as I've seen him elsewhere, I can't blame him.  So...

Really, the only laugh I think I gave the movie outright was seeing Bailey's character's bulldog riding around in a Radio Flyer wagon, earning it what I give YouTube animal videos about three times per day.

McCarthy isn't bad.  And, he has Spader, who is clearly @#$%ing around and doesn't care how any of this goes, playing a wormy executive trying to undermine Estelle Getty.  It's a little hard to take McCarthy's character's arc, but it's a sort of fantasy comedy, and it was the 1980's where we were all supposed to believe in ourselves and we'd find lucrative jobs, and that's kind of what this movie is about.  Failing upwards through the power of maybe having sex with a mannequin.

Cattrall isn't bad.  Really, the movie is at its best when she and McCarthy get an opportunity to share screentime.  She manages to take a character who could have been entirely annoying in another actor's hands and make it work with what she's given, even the vaudeville/ high-school-skit-like opening sequence (which seems there mostly to give them the opportunity to have an animated credits sequence).

It'd be tough not to talk about Meschach Taylor's performance as "Hollywood", the original mannequin dresser for the department store.  The character is textbook 1980's gay stereotype - flamboyant, dramatic, over the top and wacky - and I'd probably consider the character dated, but it's maybe not that far from Kimmy Schmidt's Titus Andromedon, so I'll leave it to other folks to debate this point - but it does feel, I dunno, not like they're exactly making fun of Hollywood.  In some ways, this was marginally progressive for 1987, even as it reinforced stereotypes and was played by a straight actor - but there's no question Hollywood is a protagonist in the film, just not our main player.

Meanwhile, the movie stands as a monument to the casual sexism and sexual harassment in the workplace that was at least part of what Hollywood thought was good for a gag back in the day, which shouldn't be too surprising in a movie about a guy who falls for his own sculpted mannequin.  Let us all have a moment of silence for "Roxie" and her inept HR department.

I dunno.  This movie is pretty terrible, and I'm not sure why it's so popular and why everyone has seen it.  It's not actually funny - and I say this as a guy who put away two Manhattans during the first 45 minutes of the film's run time.  It's not sexy or daring, but I am betting it ran like crazy on HBO or something.

And, I guess I'm out in the open on this whole Kim Cattrall thing, and I feel like a burden is lifted from my shoulders.  I welcome you to similarly unburden yourself.

To be clear, I do not think Mannequin is a good movie. I just thought it was something Ryan needed to see. For Science.

Wow, apparently my face blindness has kept me from realizing that Kim Cattrall was in a ton of movies I watched when I was younger.

I am sure you have seen this https://www.youtube.com/watch?v=XcEKtVZ0XX4

Ugh. No, I hadn't seen it. I remember when she and her ex-husband were suddenly marketing themselves as ideal lovers and partners with a book and radio interviews and all that. And then, abruptly, they got divorced. And they'd been married a while. I kind of felt bad for both of them. That's really putting yourself out there and then having to eat a big ol' matzoh ball.

@simon - maybe she's so good she disappears into her roles? yeah, I got nothing.

(I also love her in one of my favorite miniseries, Wild Palms.)