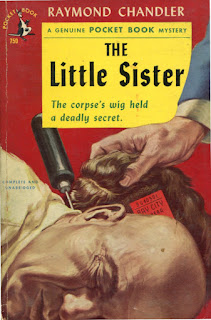 Soon Marlowe is walking in on dead bodies, ice pick killings, getting knocked over the head, and finding himself meeting starlets with sinful bodies and streetwise personalities, and everyone seems to be playing him.  Mob ties become apparent for Orrin, but whether as victim or enforcer, it's not clear.  And Orfamay's lack of big-city politic is as much a pain as anything else.

After The Lady in the Lake, this book wasn't exactly a let-down, but it felt far messier, like Chandler was writing with no particular place in mind where he wanted to go.  After the primary action wraps, the book takes quite some time to get through all its explanations and tie up all the loose ends - and until that point, I wasn't exactly sure Chandler himself knew what happened.  And, without the Hollywood ties to raise the stakes it somehow feels smaller in scale than the last two Chandler novels I blew through.

I didn't dislike the book, but let's just say it will not be the first one I recommend if someone asks me what I thought.  It's also the first one to get a bit more explicit about sex, where the prior books always seemed to dance around the subject, there's an Hispanic female as a major character (who's cheesy 1940's character dialog Marlowe himself fails to trust), and Chandler's distaste for LA pours out by the bucketload.  There's even acknowledgement of prior books in this go-round.

This one seems to give Chandler more room to maneuver with Marlowe as a character, and the character seems to not be in a great place, if he ever was.  But the sleuthing seems honest, doesn't rely on lucky coincidences, and very little goes easily for anyone in what's a fairly nasty little book.