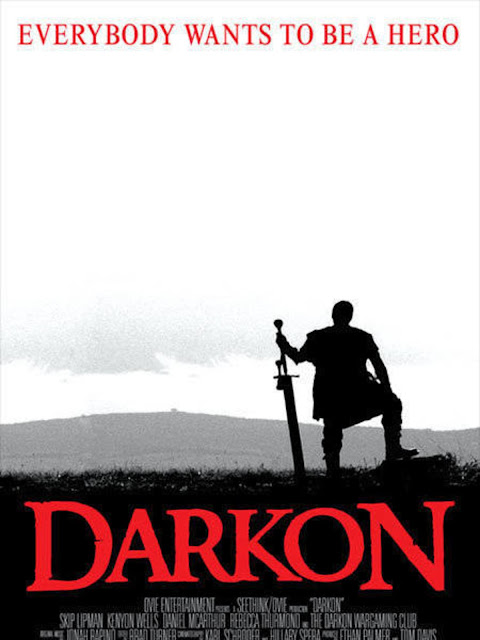 
What's odd about the movie is, despite a 90 minute running time, it feels like they've only scratched the surface.  In part, I'd argue, this is because they've chosen to focus on just a few personalities who play, focusing on one player in particular as he attempts to rock the boat (more on that in a minute).  But we don't get much of a picture of how the game originated, how the players came to the game, what the people around them think of them and the game, and we absolutely don't see anyone throw in the towel.  Instead, the filmmakers are focused on one story, and while it's a compelling story within the existing structure, in many ways the film left me with far more questions than answers.

Example:  How do the guys who play assassins and "dark elves" fit in?  What is the role of magic?  How does this crazy frikkin' thing work when it's grown adults playing dress-up make-believe?  How do they keep people showing up at all?  How do you start?  How do you quit?

There's no question the players of Darkon have their own subculture, the same as comics or sci-fi and fantasy folk and their Cons, or NASCAR people camping out for the big race.  The players have very routine - something like weekly or bi-weekly - meet-ups that are their battles for territory.  When they aren't showing up for practice or one of the weekend matches/ battles, they're camping out together in character all weekend long (and it's hard not to squinch your nose thinking of all the awkward armored tent sex that's going on).

By the time we arrive in Darkon, the baristas, secretaries, stay-at-home-dads and IT support folk who make up the royalty and characters of Darkon have reached a curious point.  One of the nations has become a sort of super-power through sheer numbers, strategy and a sort of pragmatic malevolence.  Inside and outside the game, this seems to have had impact as smaller nations have gone away (but we don't hear if players themselves have dropped out), and one of our characters decides to break from his alliance with the super power and take on the big bad.  And, so, the movie follows our one particularly enthusiastic player who has decided "in character" to break with the super power and the question of what he's up to for the game, for "all free people" or whatever, and the absolute certainty he wants to be "the hero".  But we also see him at home doing laundry, his wife trying to keep it together as she's the one with the jobby job (he's at home with their young children), and we slowly get bits of his personal history that are maybe a little too close to what's happening in the game.

Now, the folks running the super power know they're basically rolling a monstrous, Roman-Empire-like organization and - in the game - mercilessly crushing the other nations/ teams.  And they seem to find it alternately empowering/ gratifying/ funny.

In the end, the movie is basically portraying Darkon as the inevitable breaking down of people into roles we know from the real world and outside world, and maybe noting it's a little crazy and sad that it seems so inevitable to watch real-world mistakes repeated inside a game that was created and designed for people who are, essentially, misfits and who otherwise maybe are a bit on the outside of polite society, to come together and live out their fantasies stemming from movies, books and video games (and, my god, is it awkward hearing them all speak in improvised, faux-Shakespearean.  Almost every other aspect of it I can shrug at and give or take it, but that - that's when it all feels like super-awkward grown-assed people playing dress-up).

Look, I try not to judge, and in this Year of Our Lord Two Thousand and Sixteen, "CosPlay" and the validation of every indulgence someone wants to pursue in the "geek" realm has a whole lot less stigma than it once bore.  I grew up playing role-playing games, I partake in geek activities, I get excited about Star Trek and comic books (two things you didn't admit circa 1989 when I entered high school, which I wasn't shy about - but I also didn't discuss or force on others in mixed company).  But my dressing up as anyone who is not me is limited to Halloween and when I wear a suit at work.

And, as has long been known - nobody is harsher on a geek than another geek.

Maybe it's that my flights of fancy were very rarely of the fantasy medieval knights and elves sorts, and I tended to get more excited about Starfleet, Rebel bases on Yavin IV or urban centers with brightly clad aliens catching falling reporters - but I also never put on any of those outfits, either, on a a day that wasn't in late October.

But, in many ways, the further away from whatever I'm up to, the more likely I am to just high-five the person and say "you be you, you do your thing".  Instead, watching this film more than, say, King of Kong, I know the various things I got into and I know what made me think twice before proceeding.  And while I still say "LARPers, you be you", and despite the many assurances the folks interviewed are giving the camera about everything Darkon is bringing to their worlds, it's hard not to see it as a very deep hole they're digging for themselves in order to not deal with the rest of their lives  - and if they could focus that energy into their lives, who knows what could happen?

In it's way, it's very different from folks who are marginalized for sexuality, gender identification, race, religion, what have you.  These are folks who are marginalized for something else - some inability to fit the mold or fake it.  Most of the folks interviewed seem to have been kicked hard enough, or felt out of place enough, or something just wasn't clicking for them about the 21st Century.  And that I get, in it's way.  But...  it's not quite the same as marginalization for just showing up (something I am sure redditors and GamerGaters would angrily refute).

Most of these folks want to do well, they want to be heroes.  Hell, some of them want to just talk to a girl or literally move out of their mother's basement.  But being a hero - being the character you imagine you could be or would be, the one in armor in the movie, or saving the kingdom in a suit of armor - that stuff is kind of hard to pull off in the modern era.  So, imagine it.  Be it.

And, yes, of course some are amazing successes in Darkon and their real life is a shambles.  Some used the game to learn how to become a successful jerk in real life as well as the game.  Others can't seem to win in either place.  And some folks realize they're just as alone here as they are in their everyday life.  And, again, whether it's a game or not, people always wind up being people.  This isn't a scripted story, and so even in the game, it's hard to become a legend, it's hard to become relevant.

After writing all of this, I did a little digging.  The movie came out in 2006, which means we're 10 years on from the release of the film, let alone when they filmed it.  It would be interesting to learn what happened afterward, but there's not much evidence.  The official Darkon website is poorly maintained and what links work go off to websites that are positively archaic.  Trying to find the folks from the film via a search on "Darkon" reveals nearly nothing other than some changes to the game.  My assumption is that people got older and moved on.

The lead character seldom tweets and has about 151 followers.  But he's spun off his interest in Darkon-ish stuff into somehow participating in a multimedia venture.   The villainous leader works at Akamai and seems like an okay guy.  I found a video of him doing a sales-pitchy sort of thing.  The mom figuring things out is now a graphic designer (seemingly with the same company she was with in the film).
Posted by The League at 9/12/2016 01:25:00 AM

Haven't seen the movie, but I watched this interesting Vice piece on LARPing a while back. Thought you might find it interesting. https://www.youtube.com/watch?v=bXNGFb2p90k