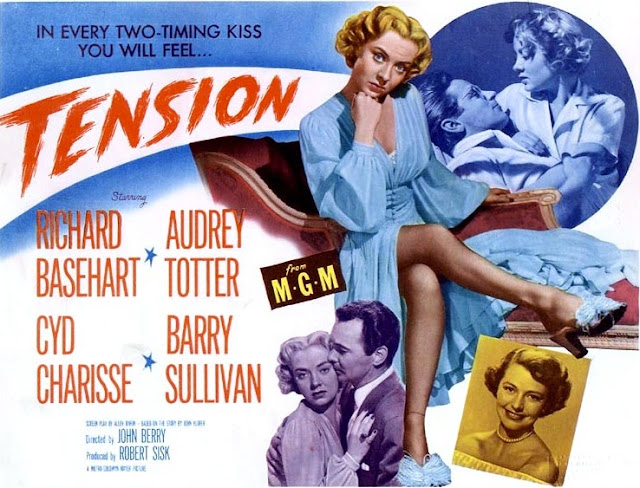 This is likely the fourth time I've watched Tension, the 1949 pulp-tastic noir I was first introduced to by JSwift during a trip to SF a few years back.  It aired this last Sunday during Turner Classic Movies' new segment, Noir Alley, hosted by Eddie Muller.*

Muller does what he does so well - introduce the movie, give some history and context and talk about the players in unpolished terms.  This screening included an appreciation of co-star Audrey Totter, whom we at The Signal Watch think is absolutely tops, and a closer discussing the complicated life of director John Berry.

In addition to Totter, the movie also stars Richard Basehart, William Conrad, Lloyd Gough, Barry Sullivan - and, oddly, Cyd Charisse in a role where there is not a single step of dance.  I mean, she's terrific - she's got some straight acting ability, but it's an odd fit for someone who appeared in roles with not a single line but a lot of dancing.  That's sort of her deal.

It's a bit of a small-scale production, a tight cast working with a rat-a-tat script by Alan Rivkin, and good, twisty fun with some severely dated bits that don't seem aware they've inverted the Superman paradigm.


Warren Quimby is a pharmacist and night manager at a 24/7 drug store, putting in his dues and scraping money together to pay for the life he wants for him and his wife, Claire.  Claire, however, is less interested in straight material security and prefers a fast life of fancy perfumes, sporty cars and guys who flatter her (and they're readily available, right under his husband's nose at the drug store's lunch counter).

Claire splits on her husband for a guy with a beach house, and after getting knocked around, a bespectacled Warren hatches a plan to kill his wife's lover, by ditching the specs for contacts and cooking up a new persona that can take the fall for killing the guy, even as he disappears.

The reason Jenifer put Tension on was to show me Audrey Totter burning up the screen as Claire Quimby, as noirish a femme fatale as any you'll ever see in one of these films.  Pure platinum poison, Claire Quimby may be one of the most delightfully despicable characters to ever make a man miserable.  A bit like Marie Windsor's character in The Narrow Margin (1952), Totter manages to make tough, unpredictable and more than a little mean with a razor sharp tongue sexy as hell.


Making abrasiveness, awfulness and capriciousness appealing is next level stuff.  Do not try at home.

I'm shocked that the studio didn't keep her on to do 4 more in the same vein.  It's a hell of a character and quite a bit unlike the aristocratic femme fatales she played in The Unsuspected or Lady in the Lake, all great, but not the same.  Maybe we saw some of it in the opening scenes of Alias Nick Beale or the western The Woman They Almost Lynched, but it's nothing like the good girls she played elsewhere like Robert Wise's boxing noir, The Set-Up.


The plot stretches credulity and has a few holes you could pass through in a school bus (why on earth is Warren Quimby hanging out with Cyd Charisse at all?  I mean, aside from the chance to hang around Cyd Charisse?) - but if you're willing to buy it, the ride is worth it.

It's a crazy bit of fun noir - nothing to shake the Earth, but but a good picture with a lot of people having fun making it, creating memorable characters in improbable situations.  And, of course, a plot that's from the pit of desperation that drives some of the best noir.

* Noir Alley is showing every Sunday morning for the foreseeable future, so, you know, set your DVRs (but do it every week as they just list the movie under the name of the movie).
Posted by The League at 3/31/2017 12:17:00 AM