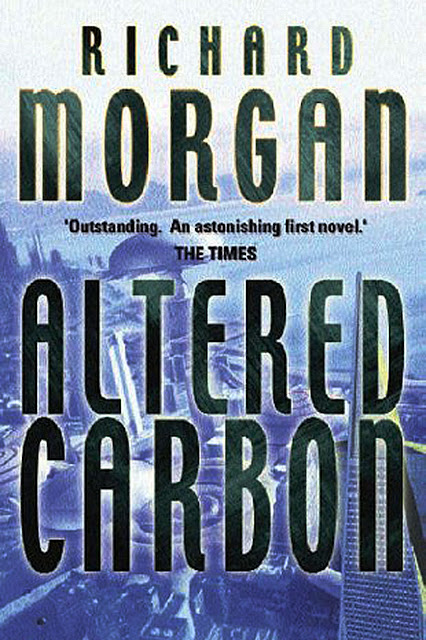 A few folks had recommended to me Altered Carbon (2002) by Richard Morgan.  Likely this was due to my interests in science-fiction and detective/ noir fiction.  Not a bad call, that.  The book is more or less a detective story with a decidedly noirish bent set in a far-flung future of high technology and interstellar travel.

While our characters live in a fantasyland of technological wonders and possibilities, the technology the book is most preoccupied with is the digitization of the human consciousness, allowing minds and personalities to flow freely between bodies or into virtual environments as specters, even crossing the cosmos for business meetings into rented "sleeves".  While mankind lives at a point where genetic and chemical manipulation of the human form is common practice, the same ills that always plague humanity are no further off.  War, hunger, institutionalized economic disparity, religious mania... all still present hundreds of years from today despite the colonization of many new worlds and the discovery of alien artifacts.


Our (anti)hero is a third class citizen from a world still young enough that history is about that of the American experience for us to date.  But out there in the stars he became a soldier, part of an elite corps of "envoys" with special insertion training to get to understand and know the enemy better than the enemy knows itself.  Somewhere along the line, things went wrong and he got out, went freelance and criminal.  And instead of doing time, he's pulled out of a space hard drive to be put in a strange body in San Francisco several hundreds years from today.  And he's asked to solve the murder and/ or suicide of a "myth", a person who has managed to live hundreds of years by managing his wealth and keeping a personal store of clones to jump between, remaining ageless - and maybe separating a bit from humanity in the process.

He delves into the current streets of San Francisco trying to solve a mystery seemingly no one wants solved.

It's safe to say that at this late date in my life, I struggle with science fiction, whether it's TV, movies or novels - which is an odd thing to realize, but I think it's fairly true.  What works for many people doesn't always work for me.  I am not dead inside, and I can also take delight in cool ideas and flights of fancy, or ideas that work as extrapolations of what we know, and cultures that seem to have appeared from some logical progression of human history.  I am perhaps less a fan of the dumping of ideas out there in the novel format - the usually extraneous but expository storytelling to explain colonization, current technologies, space wars, etc...  Although I do think there are artful ways to do this (see: the works of Philip K. Dick) where it doesn't feel like exposition as blunt instrument.

I also tend to look for allegory or some storytelling that occurs using science-fiction as a backdrop with which to communicate a more universal concept or at least human concern.  In short, if you make up a sci-fi problem, I'm probably less invested in the made-up problem our character is solving than the how's and why's of character in relation to that problem.  I think.

Certainly execution has a lot to do with how much I'll embrace or buy into in a sci-fi or fantasy book.  I don't dismiss a book or movie or show because it's about the conceit and concepts cooked up to create a new world - but I do want something out of it other than "that was a lot of neat ideas with a mediocre story for glue".   If you're going to make up a world and a problem, you've got to be ready to do more than wind around in your made up technologies and whatnot to keep me occupied.

A lot can be said about the fact that Altered Carbon is a first novel and that, 15 years after its publication some of what's in there as concepts would need to be tweaked and reconceptualized to work for a 2017 audience.

Our (anti)hero never feels entirely like a character so much as a sewn-together construct of machismo and stuff you've seen elsewhere.  In theory he's a bit like Philip Marlowe with the tough edge, wise cracks and permanent outsider status, but where Marlowe has a conscience at his core that impacts his decisions and persona, despite his place digging through humanity's grime, we're told the same about Kovacs even while he literally goes on a murder spree in the middle of the book.  What is novel about the character are the sci-fi gizmos and features baked in - all of which the author goes on about endlessly without ever giving a satisfying picture of "why" - you've got to read the next books, I guess.  But it's stuff Dick would have sewn up in three sentences scattered across a couple of chapters and not cared to get too specific about, anyway, and still made it all work.

From maybe the third or fourth chapter (of 40-something chapters) I was pretty sure this was intended to be the first book in a series.  There was simply too much being thrown against the wall with intergalactic wars, explanations about colonization that weren't particularly germane to the story and back story that wasn't informing the current story. And that's fine, I guess, and certainly every genre book being the first of a trilogy or more is what it's all about.

Frankly, I found the dialog of the book...  not so good.  If this is a detective book - and at it's heart, it is - then less is more.  We don't need three sentences every time someone opens their mouth.  Perhaps it's an artifact of listening to the book rather than looking at it on the page, but there's so much cruft tucked between the quotation marks, and so much of it pulled from Summer Blockbuster 101 dialog, it was a little hard to take at times.  But that "too much" problem is reflective of the prose in general.

That isn't too entirely condemn the book.  The mystery at the middle is certainly mysterious (in part because the author introduces a major character very, very late in the book - which... your mileage will vary).  And some details are just stated rather than discovered through detective business - which, given how much time we spend hearing about extraneous stuff, kind of threw me.  But the vision of the world is, in itself, fairly complete and Morgan does explore the edges of the possibilities and likely applications of the concepts he brings to bear.

I like that some articles or ideas were mentioned as extraneous at the beginning and worked in later, although it did make me wonder if he wrote the book backwards to add in sci-fi tricks that would overcome obvious issues for the characters later on.

The book is a hard "R" rating as it delves into explicit sexuality and violence, which is both welcome in it's frankness and internet-era knowledge of how new technologies tend to be exploited and a bit on the "you're spending a lot of time on this passage" side of the spectrum.  And while I think the author was intending to portray a future in which there's a bit more gender equality, old habits die hard.

I didn't hate the book, and I never wanted to turn it off.  It's a page turner, in it's way.  I am absolutely certain that the Netflix series spinning out of this book (or series of books) will be well worth the watch, and I'll likely tune in to see what they do.

But the book was far more about concepts, plot and world building and I'm not sure much of what else.  And there's a place for that sort of thing.  I'm just not sure, for whatever reason, that sort of thing resonates with me particularly well.  And I'm always a little surprised someone would devote that much time writing a book that wasn't trying to get under the skin of characters a bit more, get more at what these technologies had done that made them not-us.  What interstellar travel and the discovery of alien cultures would do to us.  And if it's "not much, humanity can't change" - then let's talk about that.

I'm not sure the reader actually knocked it out of the park on this one.  He mispronounced a few words (always jarring) and occasionally gave a line of dialog a completely different reading from what the author stated.  I've heard worse, but this guy wasn't my favorite.

If you pitched the book my way - I'm sorry it wasn't my cup of tea, and I'd like to hear what you liked about it.  I'm always up for re-pondering a book or movie.