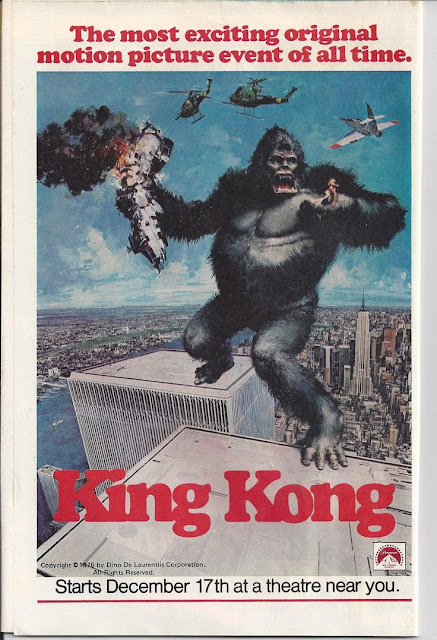 With Kong: Skull Island checked off my "must see" list, I noted King Kong starring Jessica Lange was on Amazon Prime.

If ever a movie was a mixed bag, it's the 1976 version of King Kong.  It's a movie only the 1970's could have produced, still in the echoes of the pessimistic Planet of the Apes saga but brimming with the romanticism we'd see in Superman: The Movie and Star Wars.  It features two/ three stars busting out - nobody aware they'd become Hollywood icons - in Jeff Bridges and Jessica Lange and Charles Grodin, who would go on to be Charles Grodin (and that is not a complaint).

But it's also a movie with a very good mask/ make-up on a guy in an ape suit, big animatronic hands, arms and legs for Lange to cling to, and a re-writing of the premise as an Energy-Crisis-conscious abandoning of the showbiz angle of the original for something about oil exploration.  And it really whittles down the wonder of Skull Island - dumping the dinosaurs in exchange for more dialog and human moments, severely diminishing the idea that this is an adventure film.

No real need to rehash the plot of this film, but rather than shooting a movie, Charles Grodin is an oil executive on the hunt for untapped oil reserves.  Our Ann Darrow stand in played by Lange is found floating in a life raft en route to Skull Island, the survivor of a yacht accident and a wannabe-actor.

I suspect that this movie is why so many people seemed surprised the 2005 King Kong was met with such confusion when dinosaurs filled the second act of the movie.  While there is a giant snake, the "what the hell is going on here?" aspect of Skull Island from the 1933 movie is a bit lost in favor of a straightforward recovery effort, the biggest challenge the terrain and natives.

What does feel like a decent interpretation of the original is how they reimagine the reveal of Kong as a sort of live-TV extravaganza with a crass advertising angle for Petrox Oil and the ensuing crawl across New York to the climb of the World Trade Center.  The urban chaos is just a lot of mayhem and fun, and I can see why, as a kid, this scene wigged me out.  It's as much the mayhem around Kong as Kong's scary roaring and smashing.

Jeff Bridges plays Jeff Bridges as Dude-paleontologist who is the lone voice of sanity around the oil pirates, and Lange (in her first role - and she's shockingly good if you know that) is a sort of Hollywood flighty actress-type who reads her horoscope and believes it (sorry.  Call me skeptical on that front.).  What can you say about these two that hasn't already been said?  Or Grodin?

There's an interesting article on Den of Geek that discusses the production of the film and how they apparently did build a giant Kong, but most of what you see are just arms and Rick Baker himself in make-up.  And, man, for 1976 - it's pretty damn good stuff.  You can't believe the jump from Planet of the Apes.

What none of these people knew, of course, was that Star Wars would arrive in less than a year and make this movie look like tiddlywinks.

The idea that it's wrong to portray people from a specific geographic region as superstitious and not particularly technologically advanced is something that's a fairly current notion and ignores the existence of Oklahoma.  So, yeah, this is the last version of King Kong you'll see with actual Black people playing the locals of Skull Island (although I did buy the Pacific Rim version of Skull Island, but was surprised there wasn't some dust up about Asian mysticism tied in with the movie).