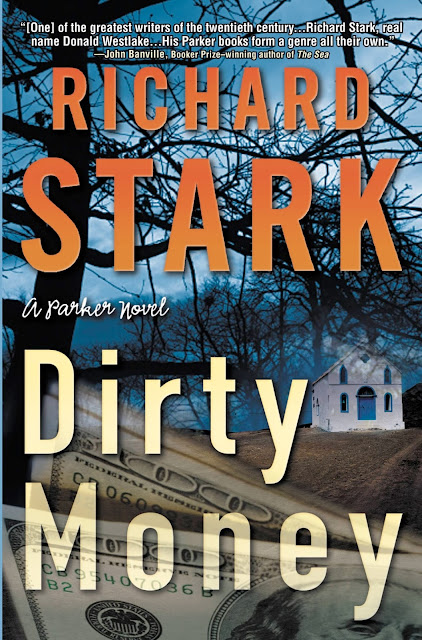 On Monday around 3:07 Pacific Time (I was flying back from Berkeley, CA), I finished the final Parker novel by Richard Stark, Dirty Money (2008).

It's a hell of a thing to say I read all 24 Parker books, plus the four Grofield spin-off novels.  That's certainly a first for me, when it comes to books.  Back in the 1990's, I read about five or six books with a tight continuity by William Kennedy, and I've read a lot of Hammett's "Continental Op" short stories - but 28 books by one person feels like a lot, airplane reading though they were.

Dirty Money doesn't conclude the series except for the fact that Donald Westlake (Stark's real name) passed on December 31, 2008 without producing any additional Parker novels.  Parker doesn't die, doesn't go to jail, doesn't give up on crime to have 3.5 kids and become a manager at Hardee's.  Butcher's Moon, the 1974 near-conclusion of the Parker series, also didn't feel quite like a finale, although the bodycount in the novel certainly had the sort of thing you didn't imagine Stark wanting to top.  But it did make for a satisfying conclusion of sorts.

Fortunately, so, too does Dirty Money make for a fantastic conclusion to the 90's-00's Parker rebirth.  The story ties together the plots of the two prior books into one continuous novel of sorts, refusing to gloss over the complications that I had, as a reader, half forgiven Stark for, thinking he had maybe written the other too quickly, hadn't really paid the same attention to detail he once did in that 1960's-70's heyday that produced the first ten novels of the series.

But not only is the money toxic - the serial numbers are known to the Feds - one of his partners from the Massachusetts heist has broken free and killed a lawman, meaning the heat is as bad as it's like to get.  Plus, a bounty hunter has dealt herself back in.  And then a whole lot of other folks keep mucking things up.

It's true that the latter-era Parker novels are less about the machined storytelling and well-devised heists of the 60's-70's era Parker books.  Parker's world is far more chaotic than the first wave of books in which any disturbance, any chance of menacing the plan was dealt with usually with a bullet.  The sorts of things played for laughs in a heist comedy play it straight in these stories, with cops showing up at awkward times, "normals" mucking things up.  The concept of disciplined thieves becomes a remote memory by Ask the Parrot, which is a bit odd given the rules of the first half-dozen or so Parker books.   But it does create more colorful characters.

Further, Stark had to stretch a whole lot more when pondering how to rob a bank, heist a truck, etc... with these novels, and the fact he takes 3 novels to come to a somewhat fiscally unsatisfying answer for Parker to even think about making some money is probably realistic.  We just aren't really living in an era of cash/ heistmen the way we were once upon a time.  There are too many other crooked ways to make a buck that are a whole lot easier.

Somehow, Stark manages to make the pain-in-the-ass recovery of the ditched funds a satisfying conclusion to the sub-triology of books, tying up loose ends, possibly opening new doors, and remembering exactly what a force Parker is in a tight situation.

Maybe of most interest is the return of Sandra, the tough P.I. who sees the law as a bit bendable, and certainly occasionally irrelevant.  Whether Parker meant for her to signal changing social attitudes about women's roles or not or if 2004 was just different enough from the 1960's to consider such a character, I can't say.  But it's an interesting change from the prior female supporting players.

But it is worth mentioning that the last few novels are all but drained of sex, which was once upon a time part of the bluntness of the Parker novels, and mixed weirdly with violence in more than one case in the series.  That sex all but disappears from the books feels oddly chaste, but maybe fits the bill of a book sold in hardback at airports rather than in dimestore spinner racks.

It's unlikely I'll return to this wave of Parker books any time soon.  They're a fine read to kill an airplane ride, but don't quite hold up to the rest of the series as much as I'd like.  Which is fine, they're just different books from a different point in Westlake's life.

But it is weird to be done.

It's sort of for the best that the novels went out without Stark trying to put a bow on anything, trying to give a conclusion to the series that would never have felt entirely satisfactory.  Having Parker exhausted, hurting and and walking away with some change in his pocket is probably the best we could hope for.