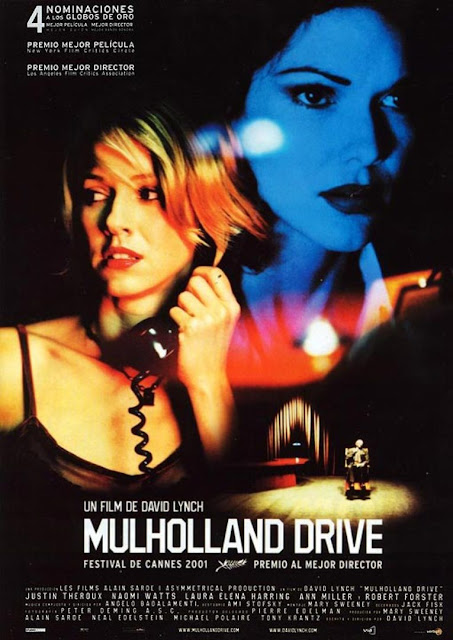 
It's worth noting that Mulholland Drive was originally envisioned as the pilot for a new series for ABC back in 1999, but it's also not at all hard to see how this was never going to play on network television, even with the, uh, sex and nudity.  Maybe HBO would have been a fine home.  We'll never know.

And even in the final film, there are elements that were likely intended to be threads to be followed up on as the show went on - some things intended, I would guess, as plot threads, taken up to clear up mysteries given literal endings or leading to additional storylines.

But watching the show, it's not entirely a surprise that a network would have passed on the pilot.  After all, the undercurrent of the movie is about the corruption of the creative process in Hollywood by seemingly arbitrary external forces.  And it's not too hard to see - after watching 30 episodes of Twin Peaks, which clearly dealt with network interference, and just trying to imagine David Lynch in a studio meeting explaining himself and Wild at Heart, you can sort of guess where these ideas were coming from.

The film opens with a limo driving down LA's legendary Mulholland Drive, a windy, hillside road.  A beautiful brunette rides in the back of a limo, which stops on the road.  One of the two men from the front comes back and points a gun at the woman when the car is hit by a reckless driver.  The woman escapes, descending toward Beverly Hills (I had to look at a map.  I've never really been to LA.) and stows away in an apartment as the tenant leaves to go out of town.

Meanwhile, yet again, a young director on his way up finds himself in a bizarre meeting where his manager and producers introduce him to two ill-mannered brothers (one is Dan Hedaya!) who insist he cast a woman he's never heard of before as the lead in his new, high profile movie.  Pushing back doesn't seem like an option.

Meanwhile, yet again, yet again, a dwarf sits in a chair too high for him, dictating orders that seem to be driving players through their business.  And, a young man describes his dream of something terrible and seems to turn it into reality.

I hesitate to tell more, because it won't make sense and if I did make sense of it, it might spoil it.

The movie is not so impenetrable as to be unwatchable nor defy any attempt to piece it together, and it's certainly a puzzlebox or mystery to unlock by the audience without the benefit of a detective to tell them how it all works.  But for all those loose ends, what matters, really, is the change at the third act, and what that tells us about both what has been occurring and what Lynch might be saying about the nature of his professional/ personal world.  And I am sure there are annotated versions of the film on YouTube or some such to help the viewer, but I'd rather just watch the movie again.  And that's not something I say very often.

There's no doubt this film is all Lynch, and I've read that he will not talk about the "meaning" of the film.  And for that, I tip my hat.  As he's said - it's the movie that's doing the talking.  If we're curious enough to know what it's saying, we'll pay attention enough to listen.

I really enjoyed this film, too. Of Lynch's puzzle films, I rank this one at the top, even above Eraserhead (unspeakable!). Probably because I think it's a bit easier to tease out some answers, as Lynch had to squeeze in the necessary information that he originally had planned to stretch out over a series. It also features one of the stars from Tank Girl, which always makes a film better.

I have a feeling that the one crucial, erm, intense scene indicates the break between what had been filmed for the pilot, and the change to a film. Before the point, the film seemed like PG, then at that scene it turns hard R.

I'm curious if you're going to watch Lost Highway, which seems like one of Lynch's more impenetrable films.