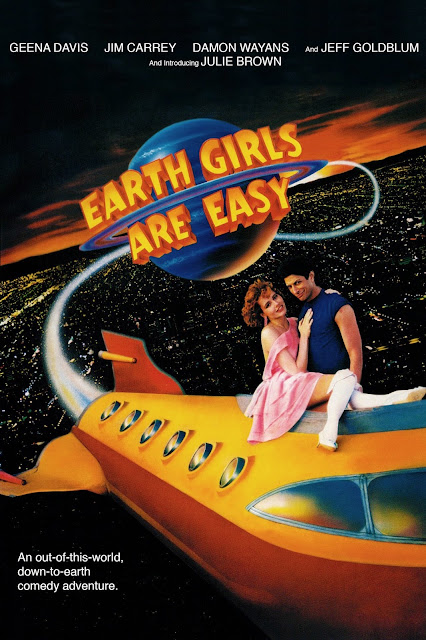 I like Geena Davis.  For many reasons.  When she's interviewed, she's witty and smart.  Working, she's funny in the comedies that made her famous, she's an occasional action hero and can play drama when called upon to do so.  She's founded the Geena Davis Institute on Gender in Media which has taken a leading role in an issue I think is actually pretty important.  And, of course, I have not ignored that Geena Davis looks like Geena Davis.

That Geena Davis-ness was probably the primary draw for me on this one during its release, or should have been, but I didn't make it past the first few minutes of the movie when it hit cable circa 1990 or so.  And in 2018, it's really weird seeing Hollywood try to sort out what to do with Geena Davis, because this is an odd part for her despite the fact she's game for everything the movie throws her way.  Geena Davis may simply not be 1980's Valley-inspired trash-culture enough for the role - she never quite sinks into - the intentionally oblivious gum-smacking Valley Girl that I suspect the film had in mind.*

Why did I watch the movie?  Well, Stuart mentioned that he'd once met Geena Davis, and I was super jealous.  And then somehow he mentioned Earth Girls Are Easy (1988), which I'd not seen, and in Googling it, I'd noticed the cast list for the movie, which is kind of bananas:
I mean - holy smokes...  that's not nothing.  And it wasn't like McKean, Rocket and Goldblum were unknown at the time - even if they weren't comedy gold of the time like...  Whoopi Goldberg, I guess.  Davis was on the verge of stardom, but I think The Accidental Tourist, which filmed after this - I think, was her breakthrough.  Meanwhile, Julie Brown was one of those MTV presences that you can't quite explain or remember what they did, exactly.  The next year, btw, Carrey and Wayans would show up on In Living Color.  Rocket had been on SNL and in carious movies and TV shows.  And Angelyne...  was just sort of a thing in LA at the time.

There's a movie that was there in the script and there is a movie that we got, and there's probably a movie that was shot that was neither of those.  And there's a comic sensibility that is so locked into the 1980's, I'm not sure if a 20-something today would get what was going on with how we processed the endless reruns, old movies, old music, and detritus of the 1950's and 60's anyone with freetime and rabbit ears couldn't escape in an era where you didn't get to choose what you wanted to see on TV or listen to if you walked away from your stereo.

Anyway - this is my story for how I became a huge Beverly Hillbillies fan in middle school, and I'm sticking to it.

The movie has a very nice, low-budget "let's put on a show" sort of feel to it that I think The Groundlings sort of perfected and personalities like Pee-Wee Herman brought to the screen in middle-America.  Mixed with the LA/ Valley sensibilities of the era, Earth Girls Are Easy serves as a semi-interesting tour of "oh, yeah... I remember that vibe in some movies and TV, sort of" bundled with a sci-fi angle that doesn't entirely work as it calls upon the late-night sci-fi and creature features of bygone decades Elvira and others were showing in the wee hours.  And, of course, that we thought old ladies had funny hair and were snoopy back in the day (you can see a bit of Berkeley Breathed's carciaturing in the old ladies wandering around).

As I say - there are three movies going on here.  What I suspect was a camp-tastic musical that was intended, probably, to highlight Julie Brown (listed as a writer), but she probably got shuttled to a minor role in favor of a "star" (IMDB lists all the actors who turned down the part, and it is a loooong list).  I don't know that's true, but...  Julien Temple was a highly successful music video director, and the movie feels and looks like a video and is at its best in the few song-components remaining.  I assume he was in on the gag.

It's just not hard to believe that the studio didn't like what it got back and started hacking and slashing, trying to make a straight comedy out of what they had (Wikipedia bears some of this out).  Inevitably, this means scenes run too long and the wrong things are pushed forward.  And I always wonder:  Why mess with something this small, frivolous and silly and try to make it something it's not?  Let it exist on it's own merits - making it more boring isn't a plus.

I dunno.  But that seems to be the lifeblood of many-a-producer, especially as studio heads change mid-picture, etc...

Maybe the weirdest bit in the movie is that Damon Wayans has a dance-off sequence.  There's no question he's a gifted comedic actor who can do physical comedy with the best of them - but it seems he is not an aerial acrobat of a dancer.  However, good for this movie, there's some random dude out there who looks nothing like Wayans who very much can do those sweet dance moves that the movie needs - and the movie does not care that you can very much see the actor's face and really hopes you think all Black dudes look alike and don't notice the switch.

There's also a dream sequence in the movie that seems like it's not narratively driven, but it does include Robby the Robot, Lectoids from Planet X, and other alien type stuff, but it really doesn't inform the plot.

In a weird way, I do recommend the movie because I wish they'd just made the movie I think is at the core here.  Meanwhile, the cast is fun, it will have no impact on your life whatsoever, and maybe Julie Brown gets a nickel every time someone watches the movie.

And, hey, it's got Geena Davis and that ain't bad.


* But it's also not the first nor the last thing featuring Geena Davis that was just not a great choice for a next career step (on the strength of Geena Davis, I went and saw that one pirate movie that took down a studio and several careers).
Posted by The League at 4/03/2018 09:18:00 PM

This movie had my attention with wacky furry aliens in a far out cartoon spaceship... and Geena Davis sunbathing by the pool. But it was Julie Brown's inexplicable music video interlude where I flat out fell in love with it. And, of course, every second of Jeff Goldblum. :)

I liked the music video bits in there. Given the era and sensibilities, my suspicion is it was all supposed to be like Brown's music video and someone with clout didn't get it and cut it to shreds in post. If they'd left it alone, I wonder what could have been.