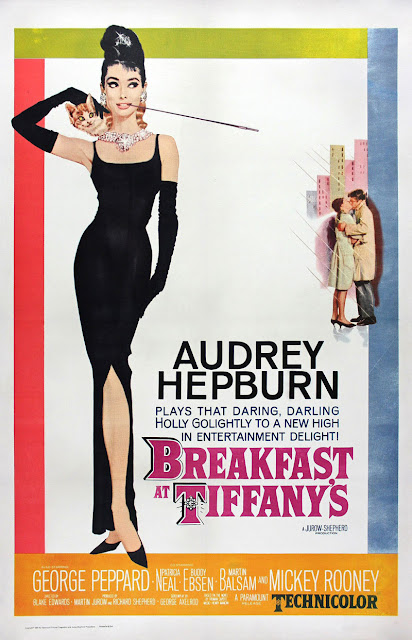 It's been a long time since I sat and actually watched Breakfast at Tiffany's (1961).  Certainly more than a decade.  I am unsure if the movie still holds the allure for college-aged folk these days that it did in the mid-90's, but whatever was going on back then led to a catchy pop tune you're not supposed to like, but which is... fine? by white-boys-on-acoustic-guitars standards.  I saw the movie prior to the song's release, but I'll be honest - the song sorta made me want to rethink how much I wanted to advertise any feelings about the movie whatsoever.


The movie has been endlessly written about, and we'll assume it's still a pop culture favorite.  It cemented Audrey Hepburn's place (or at least her character's place) as enduring fashion icon, and her Holly Golightly would give innumerable people license to think they were utterly fantastic while leaving a trail of bad credit and annoyed people behind while missing the point of the film and lacking Holly Golightly's charm, faux-sophistication and fashion sense.


The movie did give us Moon River by the remarkable teaming of Henry Mancini and Johnny Mercer, which I recommend humming during any awkward moment or unnaturally long pause in conversation.

Upon this viewing, I've decided it's probably really time for me to read Capote's original novel.

The plot:  writer Paul Varjak (George Peppard) moves into a Manhattan apartment under the largesse of his lover, a married older woman (Patricia Neal).  His neighbors include Holly Golightly (Audrey Hepburn) and a Japanese photographer (sigh... Mickey Rooney in a role that we all regret).  Holly is a bit of a flirt and a flake, living off men with a goal of getting ahead and being able to support her brother when he exits the army.  She's lovely, but clearly screwy, and therefore of interest to Paul (whom Holly dubs "Fred" after her brother) more as subject than potential mate.

A sweet friendship grows as Paul watches Holly go about her life and she encourages him in his writing.  Holly seeks stability via men with money, of which Paul has none, but Holly's encouragement leads him to go back to writing, which sort of works out.  Meanwhile, Paul learns of Holly's true past and the pieces fall into place. As does a sort of romance that's built of mutual admiration.

As much as I genuinely like the movie - and I know the ending more or less works in the context of rewarding the audience for watching the prior two hours of movie - in my crusty old age I'm more than okay with the idea that this is not the right ending for this story.  And from what I've heard, it's not what's in the novel.  For all the seemingly impossible set up of the movie, from a rom-com standpoint with the template that went wrong and brought us the Manic Pixie Dreamgirl - the movie feels oddly... true.  More so than a dozen meet-cute's and realizing you-were-in-love-with-that-swell-co-worker-all-alongs.

The movie very well captures the experience of knowing someone with a life in chaos and what it's like to be a friend to one of those people, which is a lot of work that person doesn't ever seem to take on... but it's at least interesting as you do it.   Less often are we forced to pretend to be married to our sexy boss or find out our spouse is a spy, so as a romance, it's got something.

I'm not sure it's a story of young love - both characters are too experienced and worldly for that - but it does get at something about the mystery of another person and sorting that out, especially when they seem to want to be an open book.

Like the beginning of Mad Men, the film sits on the edge of the 1950's.  As much as people talk about Holly Golightly, Peppard's Paul is a pretty great character himself, and as modern as the film continues to feel almost sixty years on, he's an interesting bridge between the prior decade of masculinity and acting and what was coming during the 1960's leading to now.  He's cerebral, jaded enough to have taken up a role as a society matron's boytoy and okay with it, and doesn't run off half-cocked at the sight of Holly, or fall for her like a fool.  But he's also fine with a friendship with no clear boundaries - that, this being a movie, must blossom into love, but it does have an organic quality that doesn't mistake early-on-set infatuation with love.  They actually bother to build to that - at least on Paul's part.

I'm particularly fond of the scene where Holly escapes a grabby beau by coming up the fire escape to Paul's apartment and catches him in post-coital relaxation, disarming any amorous set up to the scene and allowing the characters to simply start to get to know one another. The motives for both characters here are simple and not awash in "trying to sleep with other person", which both lower their guard.  It's a good piece of work.

So:  Mickey Rooney's yellow-face character.  It's shameful and well-documented as a blight on an otherwise decent movie.  Unlike the "Abraham" scene in Holiday Inn, it can't be cut around for broadcast (nor should it be - dealing with our past is how we point to our future), and I imagine if current trends continue, it will probably mean the slow death of the movie.  My opinion: we need to learn to contextualize this sort of thing or we're becoming chronological puritans and will continue to wipe away the record of our past whenever confronted with anything considered offensive to modern sensibilities (and I am not dismissing those sensibilities).  I imagine that within 8 years of the movie's release, everyone regretted that decision.

Still, I don't buy the ending.  Sure, we all want the music to swell, for the cat to be found, for the girl to fall into our arms and realize she's going to settle in - that's a movie ending.  But I think we all know that girl disappears, and if she resurfaces it's years later and states away and she's either managed to bump along in much the same way to where it's not cute anymore or she's married with four kids and seems to have amnesia about that part of her life until you get a drink in her.

Anyway, I need to get around to reading the book.