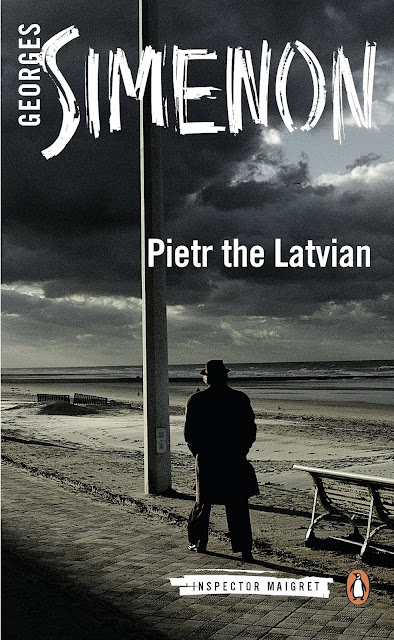 After completing the two Maigret mystery movies, I decided to check out some actual Inspector Maigret novels.  Not as big of a deal here in the states, but in Europe, they appear to be quite popular.  I found a set on deep discount and after waiting for a month for them to make their way from a shop in the UK to my doorstep (amazing world we live in, what one mouse click sets in motion), I got to crack the set for my plane ride to San Jose.

After reading Hammett and Chandler, it seemed fair to see what was going on with mystery books across the ocean.

Georges Simenon was a Belgian writing in French about a Parisian detective circa 1930 when this book appeared.  I am unclear when the translation occurred or how much was changed in meaning - I would expect that after 80 years, everyone is satisfied with what's on the page.  It seems reasonable to trust Penguin to do right by these books.


Hammett was writing before Simenon and about a very different sort of detective, Chandler was writing afterwards and - again - about a different kind of detective.  Nor is this Poirot with his eccentricities and unique genius.  Simenon's Maigret is unapologetically who he is - a man who has risen above his working class roots but wears them in the open.  His oft-described imposing physicality suggests something about the role of law in the moving, shifting world of lawlessness.  In this first novel he's as singularly driven as any of those other detectives - even if his methodologies fall within and are in support of the law.  He's not the cynic of American detective stories, but he's far from naive - but maybe a little worn down by what he knows about people.

Pietr the Latvian finds Maigret sent on the trail of an international criminal known only as "Pietr the Latvian", although his true heritage and name are shrouded in mystery.  Upon arriving at the train station to intercept the criminal, Maigret spots the man on the platform, headed out, and at the same time is alarmed to find a murder had occurred on the train.  No less, the person murdered well-resembles Pietr.  He tracks Pietr to a posh hotel where he finds him meeting with a wealthy, respected American.

The novel is short, so I don't want to spoil the mystery itself.  Simenon does a phenomenal job of not revealing too much at any one moment, certainly putting the clues out there, but not tying it up until the end.  Learning about Maigret and his dogged pursuit of the truth makes for a page turning read, the characters are well-imagined, and while some feel they come from stock parts, it never feels predictable.  For the time the novel was released there's some whiff of the modern concern for how a mix of ethnicities and nationhoods are portrayed, and some blanket statements, but Simenon conveys a level of understanding that perhaps a life in Europe allowed for a crossroad of cultures, especially in a Metropolitan city like Paris.

Like the two Maigret movies I watched, there's an edge to the novel that even hard boiled American crime stories don't tend to go in for - less obfuscation of the realities of what is at play, less euphemism and a certain directness I liked.

It's true I didn't entirely see the ending coming, and I very much didn't expect the wrap up to the case.  But it also doesn't feel like Simenon was simply out to shock - there's a sort of sympathy that is lent to the villain of the piece, and how Maigret deals with his fate tells us much.

I'm pretty excited to have the next five books at the ready for my airplane reading.  While some of the writing has the peculiarities of pulp of the time - things that show up in early Hammett, too, it's not hard to read, and the story and characters continue to work well in 2018.  Add in the curious setting and wide range of types of characters more like to be seen in Europe than, say, Central Texas, and it does make for both a bit more difficult read for a land-locked American like myself to visualize, while also offering up something new and welcome.